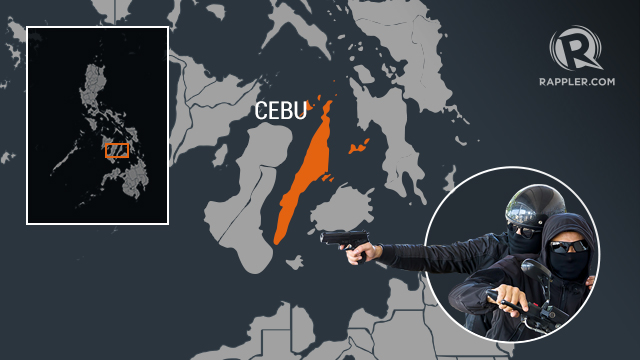 CEBU CITY, Philippines –A t least 3 people were killed in separate shooting incidents during a period of less than 24 hours in cities across Metro Cebu between Thursday, July 11 and Friday, July 12.

After fleeing the crime scenes riding their motorbikes, all suspected gun-for-hire killers in the shootings still remained at large as of this posting. (READ: PNP: 4 riding-in-tandem kills a day already ‘low’ number)

Julius Engbino, a native of Minglanilla town was killed around 1:30 pm on Friday, July 12, in Barangay Tangke. He was found dead at the entrance of an abandoned house in the neighborhood.

Police believe two men were involved in the shooting – the shooter and his lookout.

The suspects fled the crime scene on a motorcycle.

Talisay City police suspect the motive of the killing was linked to Engbino’s job at the Land Transportation Office.

In Cordova town, Cebu, a trisikad driver was shot dead at around 5 am on Friday.

Cordova police said 56-year-old Romeo Calunod was heading back home after dropping off his niece at the Upper Highway in Barangay Pilipog. (READ: 70-year-old businesswoman killed by riding-in-tandem in Cebu City)

Two men riding a motorcycle followed the victim and shot him in the head and chest. The victim died instantly.

Cordova police said the killing could be due to “personal grudge” since the victim was a suspect in a shooting 10 years ago.

Grandfather killed in front of family

While walking on their way home, the 7-year-old granddaughter and the wife of a 53-year-old man witnessed his death around 4 pm on Thursday, July 11, at Barangay Tipolo, Mandaue City.

Mandaue City police said Teodoro Mejares is a native of Consolacion town, Cebu, and had just posted bail for a case of illegal possession of firearms at the Regional Trial Court Branch 56 inside the Mandaue City Hall of Justice.

Mejares’ wife told police she heard her husband begging for his life before he was gunned down. She recalled the victim pleading, “Ayaw intawon ko’g pusila, sir! (Please don’t shoot me, Sir!)”

Mejares’ wife told investigators the assailants wore helmets that covered their entire faces. The backrider, she said, shot Mejares multiple times even after hearing his plea. (READ: [OPINION] The Philippines’ scourge of killers on motorbikes) – Rappler.com