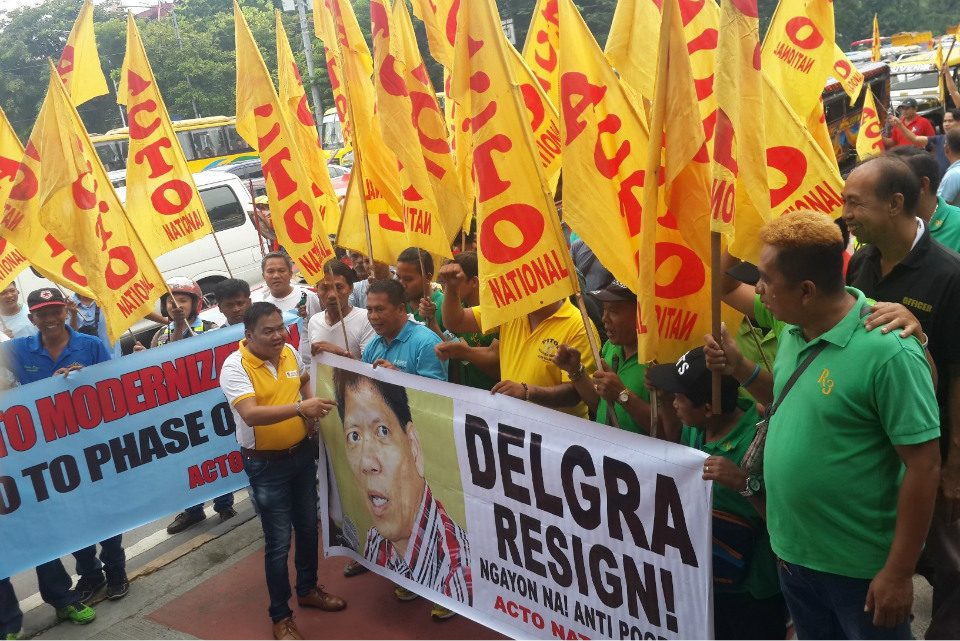 MANILA, Philippines – Jeepney drivers staged a rally on Monday, July 15, as part of their renewed calls to junk the modernization program that would phase out old jeepneys.

The groups warned that Monday’s action would lead to a nationwide strike “if the government continues to ignore the plight of the drivers and small operators,” Piston leader George San Mateo told Rappler.

But the LTFRB stood firm and said that it would continue the public utility vehicle (PUV) modernization program of the government. The week prior, the LTFRB relaunched the program nationwide.

Corpuz said that they will push through with the 2020 timeline, that all jeepney units in the Philippines should be compliant with engine and dimension specifications, and that all operators should have consolidated into cooperatives, all by June 30 that year.

The LTFRB board member said that the government has given jeepney drivers “enough time” to comply with the program.

Still, the call of the drivers remain the same. The modern jeepneys are too expensive for them.

Acto president Efren de Luna claimed that the LTFRB endorses a specific type of jeepney that all drivers should operate and avail.

De Luna also said that the loaning process under Land Bank of the Philippines is difficult, as it requires operators to consolidate into cooperatives.

But the LTFRB said it’s still up to the drivers to choose their on make and model of jeepney that they would want to operate, as long as they follow the guidelines of the government.

The agency also clarified that individual jeepney operators can use their own garage as terminal, as long as it is near the assigned route.

On Monday, Senator Grace Poe said the LTFRB should not be dismissive about the demands of the transport groups.

“The issues surrounding the jeepney modernization program are far from resolved…The program, no matter how promising it looks, should also not brush aside transparency and due process for drivers and operators who only ask government to consider their plight,” Poe said.

Poe previously said that the drivers are on the “losing side” in terms of costs brought by the modernization program.

According to LTFRB figures, only 4,000 modern jeepney units are in operation, while 17,000 are available to be loaned. There is an estimate of about 180,000 registered jeepney franchises nationwide.

In 2017, when the PUV modernization was first launched, transport groups held several strikes nationwide to protest its implementation. – with a report from Aika Rey/Rappler.com

Enrico Berdos is a Rappler intern. He studies journalism at the University of the Philippines-Diliman