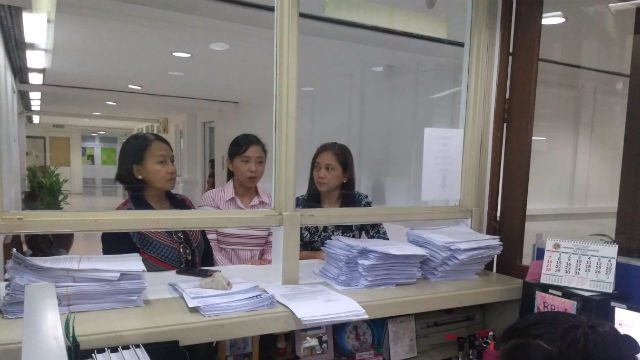 Facebook Twitter Copy URL
Copied
The lawmakers accuse the Department of Education of violating the rights of the Lumad schools' administrators, teachers, staff, and students

MANILA, Philippines – Six legislators forming the progressive Makabayan bloc in the House of Representatives are calling for a congressional investigation into the temporary shutdown of 55 Lumad schools in Southern Mindanao.

According to the lawmakers, the Department of Education’s (DepEd) temporary closure of 55 schools catering to indigenous peoples in Southern Mindanao is a “flagrant violation” of the rights of Salugpungan Ta’ Tanu Igkanogon Community Learning Centers, which owns and operates the schools. (INFOGRAPHIC: Who are the Lumad?)

“The suspension order was issued in flagrant violation [of] the due process rights of Salugpungan, its administrators, teachers, staff, and students,” said the Makabayan bloc in HR No. 58.

They also slammed the DepEd for releasing a copy of the suspension order to the media before informing Salugpungan first.

“It is not only unjust and unethical, but clearly smacks of discrimination against the Lumad of Salugpungan,” said the legislators.

The DepEd based its closure order on the report of National Security Adviser Hermogenes Esperon Jr, who chairs the Task Force to End Local Communist Armed Conflict.

According to the task force, the Lumad schools allegedly deviated from the curriculum set by the DepEd, and school officials supposedly required learners to join anti-government rallies. The task force also claimed that the schools teach students to rebel against the government.

President Rodrigo Duterte himself had made the same allegation against the Lumad schools, and even threatened to “bomb” the schools.

The Makabayan lawmakers, however, slammed the continuous red-tagging of Lumad schools.

“The administrators, students, teachers, and staff of the Lumad schools, particularly the Salugpungan schools, have been continuously subjected to red-tagging, vilification, and harassment for several years, according to the Save Our Schools Network,” said the legislators.

“The threat arising from the red-tagging and the actual occupation of military forces of school buildings caused its intermittent closures in the past years,” they added. – Rappler.com