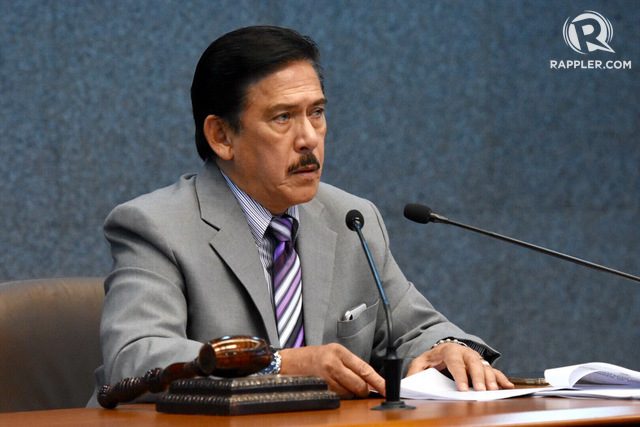 MANILA, Philippines – Senate President Vicente Sotto III said he wouldn’t be surprised if the Philippines pulls out of the United Nations Human Rights Council (UNHRC) over the adoption of a resolution calling for action against the spate of killings in the country.

Sotto told reporters on Monday, July 15, that the United States in 2018 pulled out of the rights body, which it said was being “hypocritcal and self-serving.”

“I won’t be surprised if Secretary [Teodoro] Locsin [Jr] will follow suit, considering the way they all of a sudden handle the resolution of Iceland,” Sotto said.

The Iceland-proposed resolution asked the rights body, among others, to prepare a comprehensive report on the killings in the Philippines.

Sotto criticized UNHRC for adopting the resolution despite “not getting the majority.”

“They [did not even get] the majority of the members of those present in the quorum, and saying that it is a UNHRC resolution…. They should review their rules, because the rule that they are following is illogical,” Sotto said.

Sotto said he would leave the decision to withdraw from the UNHRC to Locsin, while Senator Francis Tolentino, in a separate statement, said the decision should come from President Rodrigo Duterte.

If the Philippines decides to exit the UNHRC, it will be the second international body that the Duterte administration will be leaving in a span of two years.

Manila left the International Criminal Court in March, as the body launched in 2018 a preliminary examination on the Duterte administratin’s war on drugs that has killed thousands.

“No embassy in Iceland. Nor does Iceland have an embassy here. Iceland took the place of the US after it withdrew from the Human Rights Council. I think we need to follow America more,” Locsin said.

The US withdrew from the UNHRC after the rights body criticized Washington for separating migrant children from their parents at the border.

But Senator Panfilo Lacson on Monday said the Philippines would still need the help of other nations as a developing country.

“At the rate we are withdrawing from the UN bodies, it could only be a matter of time when we will be left to our own devices. We may not know when, what, and how, but being a developing country, we may need to ask for help from the community of nations sooner or later,” Lacson said.

Locsin claimed that the Philippines has an “unblemished” human rights record and blasted European countries for having “no moral high ground” because of their sins against the world, such as the Holocaust, among others.

De Lima criticized Locsin for such an argument, and for skipping human rights abuses during the Marcos dictatorship.

“The past can never be used as a justification that the Philippine state now has the right to kill its own people in the guise of defending itself against criminals and illegal drugs,” De Lima said.

Presidential Spokesperson Salvador Panelo said President Duterte would still decide if he will “permit” such probe.

But the Philippine leader had previously bristled against any attempt by an international body to probe his government. – Rappler.com