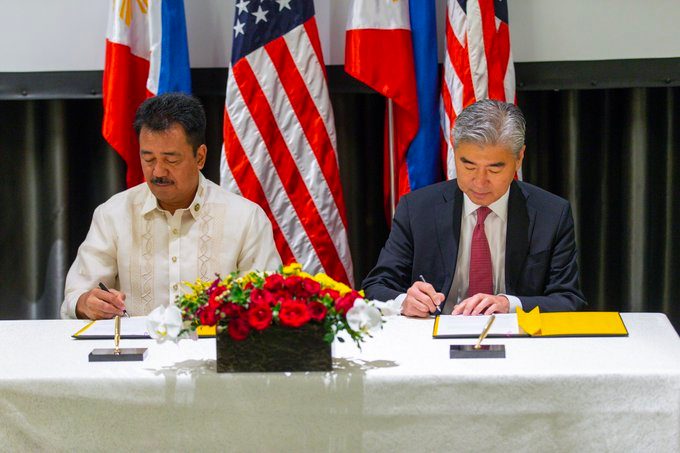 Facebook Twitter Copy URL
Copied
A new 'Philippines-U.S. Alliance Fellowship' for Filipino scholars seeks to send two Filipinos to the US to study national security and international relations every year

MANILA, Philippines – The Philippines and United States signed on Tuesday, July 16, two statements and agreements on education and during the Bilateral Strategic Dialogue (BSD) held between the two countries in Manila.

These included a joint statement on higher education signed by US Amabassador to the Philippines Sung Kim and Philippine Commisison on Higher Education Chairman Prospero De Vera III and a science and technology agreement signed by Kim and Science and Technology Secretary Fortunato de la Peña.

In a press conference on Tuesday, Kim said the higher education agreement would serve as a “way forward” to expand educational ties between the Philippines and the US. The science and technology agreement will also “deepen cooperation” between the two allies.

Proud to sign a new ten-year agreement on science and technology cooperation with our friend Secretary de la Peña from Department of Science and Technology! Together we will help solve tomorrow’s challenges. #FriendsPartnersAllies pic.twitter.com/QLzWq5FqMP

Aside from this, Kim also announced the creation of a new fellowship called the “Philippines-U.S. Alliance Fellowship” for Filipino scholars. The fellowship will be funded by the US and seeks to send two Filipinos to America every year to study national security and international relations.

Talks also saw the two counties start the development of a project aimed at supporting Filipino teachers who go to the US on its “Exchange Visitors Program.”

The BSDs take place yearly and are done to tackle the “full range” of political, security, and economic cooperation between the two countries.

The next BSD is scheduled to take place in Washington, DC in 2020. – Rappler.com