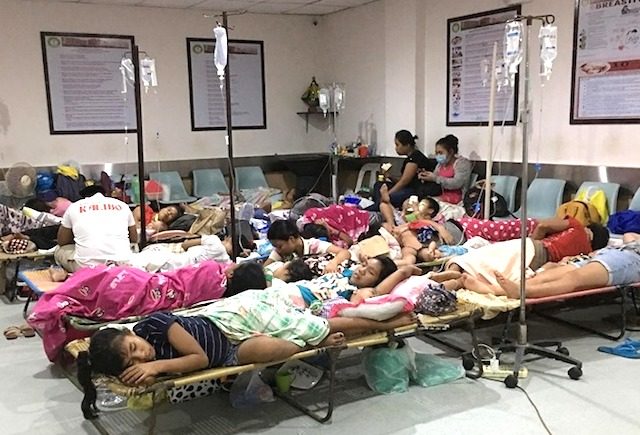 Facebook Twitter Copy URL
Copied
Aklan Governor Florencio Miraflores urges local officials and communities to also take proactive steps against dengue as the province records 2,121 cases in the first half of 2019 – a 157% increase over the same period in 2018

AKLAN, Philippines – The provincial government has declared a dengue outbreak in Aklan because of the “alarming increase” in cases in the province.

The declaration was made during the Provincial Anti-Dengue Task Force meeting with Governor Florencio Miraflores in Kalibo on Monday, July 15.

In Aklan alone, the Provincial Health Office reported 2,121 dengue cases, 157% higher than the  824 cases recorded in the same period last year. In 2017, the province recorded only 467 dengue cases from January 1 to July 6.

At least 85 barangays in Aklan have clustering of cases.

“There is an alarming increase and unusual occurrence of dengue cases within the 3-week period monitored,” Provincial Health Officer I Dr Cornelio Cuachon Jr reported during the meeting.

Kalibo has the most number of dengue cases, with 523 or 25% of the total cases in the province, followed by Balete with 213 cases, and Banga with 196 cases recorded in the first 6 months of 2019.

Only two towns recorded a lower number of dengue cases this year – Madalag and Libacao.

Health officials said only 3% of dengue cases were outpatients, while the 97% were hospitalized.

The Aklan governor appealed to local officials and communities to take pro-active steps against dengue.

“If we cannot contain dengue in the next few months, it could be a serious concern. And we don’t want it to happen. Imagine Boracay Island under a state of calamity? Who will go to Boracay if we have a state of calamity of dengue,” the governor stressed during the meeting on Monday.

“This will help decongest district and provincial hospitals in Aklan. We have a seen a spike or dramatic increase in dengue cases in the last three weeks and we anticipate during rainy season the number of dengue cases will increase from July to December,” he said.

To stop the spread of dengue, a cleanup drive in towns and clustered barangays will be held every Friday and Saturday.

Milflores added that provincial government will also enter into a memorandum of agreement with private hospitals to facilitate the admission of indigent dengue patients.

“Most of the time parents are in panic when their children have fever. If we could test it in the RHU level and identified it as a dengue case, they could send it to a hospital,” Miraflores said.

A majority of dengue patients belong to the 11-to-20 age group.

There were 15 deaths reported this year, as of July 6, compared to 7 fatalities for the whole year of 2018.

New Washington has the highest case fatality rate of 1.88%, followed by Nabas with 1.49%, Balete and Tangalan with 1.41%, and Numancia with 1.2%. The rest of the municipalities in Aklan recorded  case fatality rate lower than 1%.

In Kalibo, the barangays of Poblacion, Tigayon and Andagao are considered dengue hotspots or villages with increasing number of dengue cases every week.

“There is an impending outbreak in these two barangays, the rest have clustering of cases or three or more cases in four consecutive weeks,” Cuachon said.

In Aklan, Poblacion Kalibo has the most number of dengue cases (49), followed by Tigayon with 35, Man-up in Altavas with 21, Cawayan and Ochando in New Washington with 20 cases each, Estancia Kalibo with 19, and Manoc-Manoc in Malay and Tamalagon in Tangalan with 17 cases each.

On the same day that Aklan declared an outbreak, the Department of Health (DOH) declared a National Dengue Alert as dengue cases continued to rise in several regions in the country. – Rappler.com