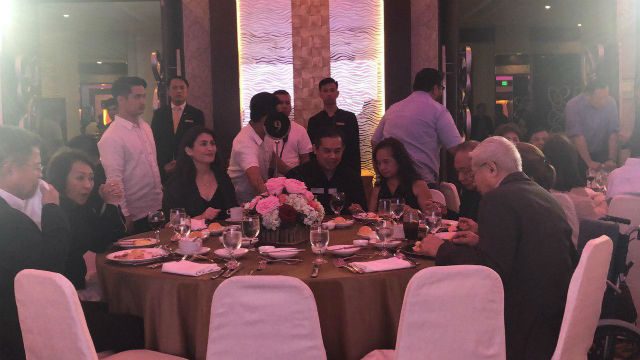 Romualdez dedicated a part of his speech honoring Arroyo, who attended the thanksgiving dinner he hosted for lawmakers who had supported his speakership bid held on Tuesday night, July 16, at the posh EDSA Shangri-La hotel.

“I want to thank her for making me become what I am today. She has mentored me as President and even as Speaker,” said Romualdez.

“I was on the sidelines, but beyond her genius mind, her work ethic, and her steadfast convictions to do what is best for the country, I have gained a lot of experience and wisdom from her,” he added.

Romualdez’s strong ties with lawmakers made him a top contender for Speaker. (READ: Romualdez to ‘return the favor’ to those who helped Eastern Visayas after Yolanda)

But he has dropped out of the race and accepted President Rodrigo Duterte’s offer that he be the influential Majority Leader instead. Duterte said two other speakership bets – Taguig City-Pateros Representative Alan Peter Cayetano and Marinduque Representative Lord Allan Velasco – will share terms as the leader of the House.

Romualdez and his wife, Tingog Sinirangan Representative Yedda Romualdez, have long been allies of Arroyo, a stalwart of the Lakas-Christian Muslim Democrats (Lakas-CMD) party before she transferred to Duterte’s Partido Demokratiko Pilipino-Lakas ng Bayan (PDP-Laban) in 2017.

Romualdez, the current president of Lakas-CMD, is also the nephew of former Ilocos Norte 2nd District representative Imelda Marcos, whose political clan is allied with Arroyo.

Lawmakers brave the rain for Romualdez

Despite the heavy rain on Tuesday, Romualdez’s thanksgiving dinner was attended by around 100 lawmakers who belong to different political parties and party-list groups.

Arroyo, former president turned Pampanga congresswoman, and her husband Mike Arroyo shared a table with the Romualdez couple. Their son Mikey Arroyo, who will replace his mother in the 18th Congress, was seated at another table.

Also in the table with the Arroyo and the Romualdez couples were Quezon 3rd District Representative Aleta Suarez, the wife of another Arroyo ally and former House minority leader Danilo Suarez, and their daughter-in-law and ALONA Representative Anna Marie Villaraza Suarez.

Despite the impressive number of legislators who showed up for Romualdez, his ally Defensor refused to call it a show of force days before the House will elect its next Speaker on Monday, July 22.

“I think in the same manner, if Cong. Allan Velasco would call for a get-together, many of us will also be attending because marami pa kaming hindi kilala (we don’t know each other). There are 300 of us and many, about 100 neophyte members of the House, so this would be a good way to know each other before the official SONA (State of the Nation Address) of the President,” Defensor told reporters on the sidelines of the event. – Rappler.com