MANILA, Philippines – Manila Mayor Isko Moreno continued to give a glimpse of his new Manila as he announced a plan to build a complex to replace the beatdown Vitas slaughterhouse in Tondo.

Moreno revealed his plans on Wednesday, July 17 as he lamented the condition of the filthy and rundown place while walking through it.

(We cannot take this sitting down because what we’re after [is], the people of Manila who will by meat in Talipapa, the market, should be given assurances that the meat they buy has been slaughtered and prepared in a clean way and inspected by doctors who deem it safe and clean for food consumption.)

As Moreno went around the slaughterhouse, trash, flood waters, and muddied floors were seen throughout the structure. The mayor also called out the absence of proper offices for the Manila Veterinary Inspection Board (VIB).

In line with this, Moreno said the city government planned to fix up the place and build new structures that would make it a “community of development.”

A tarpaulin bearing some of the new structures included plans for an animal clinic, a two-story slaughterhouse, holding area for animals, and city pound, as shown below. 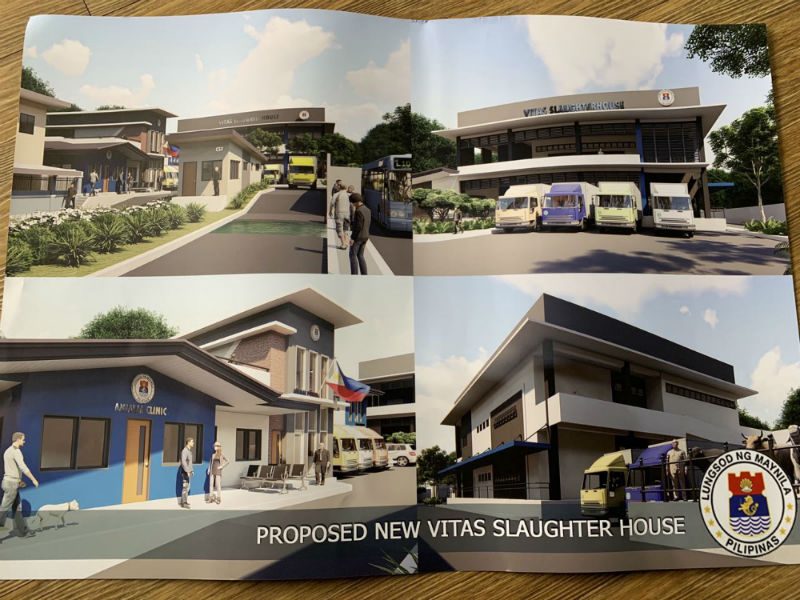 Nearby the structures, Moreno said he planned to build new in-city vertical housing for informal settler families and offices for employees of the Manila VIB. It will also include a gaming area and sports facility for the community.

The new mayor said improved facilities were needed for the slaughterhouse complex after the Department of Environment and Natural Resources (DENR) called out the condition of the slaughterhouse’s sewerage system.

Waste from the Vitas slaughterhouse, Moreno said, ultimately streamed out to Manila Bay. Moreno had pointed to the previous city administration for the slaughterhouse’s sorry state but said he would instead focus on fixing up the place. “We don’t want to complain. We will just accept these facts and try to address it,” he said.

The Vitas slaughterhouse had made headlines las year when residents of Manila were up in arms over plans to demolish it and build a cockpit arena in its place.

Moreno said the city government would review the contract of the cockpit arena already existing there to see if it complied with the law. If it did, Moreno said he would keep it there though the priority would be on plans for the basic facilities.

Moreno eyed the new slaughterhouse to be operational by 2020. – Rappler.com