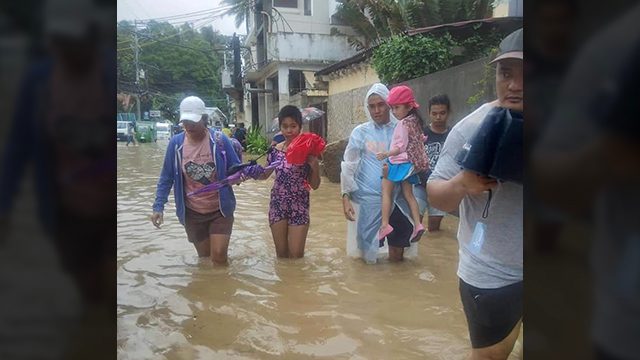 Facebook Twitter Copy URL
Copied
(UPDATED) The Boracay Inter-Agency Rehabilitation Management Group attributes the flooding to the ongoing construction of the drainage system in the island, which is eyed for completion next year

AKLAN, Philippines (UPDATED) – The Boracay Inter-Agency Rehabilitation Management Group (BIARMG) has appealed to residents and tourists  for understanding following flash floods in the world-famous island caused by heavy rains over the past days.

BIARMG manager Natividad Bernardino attributed the flooding to the ongoing construction of the drainage system in the island, which was eyed for completion next year.

(We are appealing to the tourists and residents in Boracay who are experiencing this flooding. This is because of the ongoing construction of the drainage system. We are still not done with all these projects which will be finished in the middle of next year.)

Bernardino said in a news briefing on Wednesday, July 17, that the affected areas are D’Mall D’Boracay main road, Ambassador in Paradise Hotel main road, and the Bloomfield Academy area in Barangay Balabag.

Bernandino said mitigating measures were being put in place to ease the flooding, with the help of Department of Public Works and Highways and water utility companies.

She noted that the flooding at the Ambassador Hotel main road, which she described as a “catch basin,” had already receded.

Bernandino said the task force needed the cooperation of the staakeholders to sustain the rehabilitation efforts.

“We appeal to [the stakeholders to] bear with us as we undertake road improvement and sewerage works,” she added.

Meanwhile, Aklan District Engineer Noel Fuentebella said phase I of the road improvement project from Cagban port in Manoc-Manoc to Yes FM radio station in Balabag had been substantially completed.

Phase 2 of the project – from the radio station to Ambassador Hotel to CityMall Boracay in Balabag, and from Crossing Rotunda to Tambisaan port in Manoc-Manoc – was also ongoing.

The government had earlier said that the full rehabilitation of the island, which was closed to tourists for 6 months last year, would be finished by the end of 2019. – Rappler.com