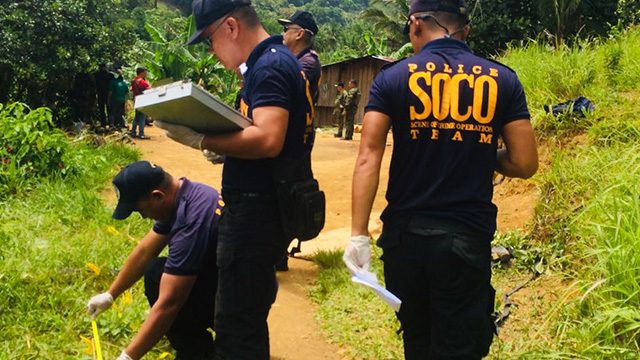 NEGROS ORIENTAL, Philippines (UPDATED) – The 4 policemen who were killed in an ambush on Thursday, July 18, were set up for the attack, according to the regional police chief.

They were supposed to meet their contact, identified as Victoriano Anadon, who was later found to have an alleged link with the New People’s Army.

Sinas, who went to the ambush site at Barangay Mabato in Ayungon town on Friday, said the 4 cops disguised themselves as foresters on board 3 motorcycles. They were waylaid by the 30 to 40 armed suspects on their way to Anadon’s house, and were quickly disarmed.

There was a scuffle, but the policemen were subdued by the rebels, he said. “In a sense, it was an ambush, but there was no exchange. They were overpowered,” he added.

He said the 4 policemen were then brought to Anadon’s house.

It was Anadon who tied the policemen with nylon, as ordered by the rebels. He was then asked to leave.

Sinas said the 4 policemen were summarily executed. Each of them sustained a lone gunshot wound to their head, he added.

“They were either sitting down or kneeling when they were shot at the back. The trajectory of the bullet was from above. It was cold-blooded,” he said.

This latest account contradicts the initial report made on Thursday by Major Leo Logronio of Regional Mobile Battalion Force Region VII, who said the 4 policemen were on board two motorcycles when they were waylaid and fired upon by an undetermined number of suspects, and that they succumbed to multiple gunshot wounds, which caused their instant deaths.

Sinas said Anadon is considered as a person of interest, and may face charges of conspiracy to commit murder.

He also said they are looking if the barangay captain will have a liability considering he didn’t mention to the victims that the area was a mass base of the rebel movement. He was cooperative in the investigation, Sinas added.

The PNP said in a statement from Crame, released to the press on Friday, that they would extend assistance to families of the police officers killed in the ambush.

They also called on the NPA fighters in the region to “sever ties” and withdraw its support for the Communist Party of the Philippines (CPP) and National Democratic Front (NDF).

They asked the rebels to “embrace the police-church backed localized peace talks in order for them to lead normal and peaceful lives with their families.”