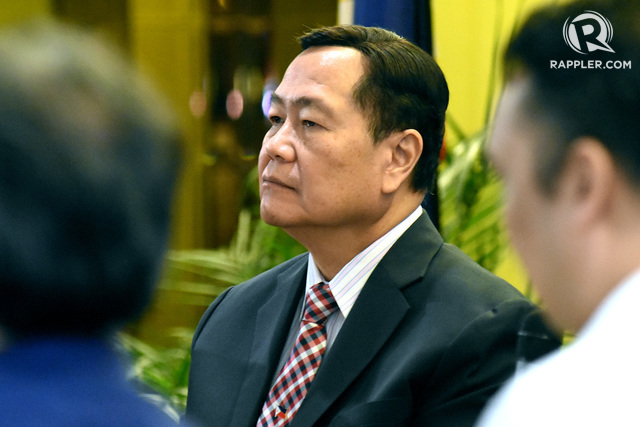 “[The Senate] will have to ask the President through the DFA (Department of Foreign Affairs) secretary what is the verbal agreement about. Because under international law, it’s very rare, but it can happen, that an international agreement will be verbal,” Carpio told reporters on the sidelines of a forum in Quezon City on Friday, July 19.

Carpio had warned Duterte last week that mentioning the supposed fishing agreement during his State of the Nation Address (SONA) on July 22 would officialize it and bind the Philippines to what Carpio called a “lopsided” deal.

Carpio added that such a deal cedes the country’s sovereign rights in the West Philippine Sea, which constitutes a violation of the 1987 Constitution.

Duterte earlier said he had entered into a verbal agreement with Xi in which he allowed Chinese fishermen access to Recto Bank off Palawan in exchange for Filipinos’ access to Scarborough Shoal.

The President added that he would use his SONA to “educate” people about the constitutionality of the supposed agreement.

This was in the aftermath of the incident at Recto Bank off Palawan on June 9, in which a Chinese vessel hit a Filipino fishing boat, causing it to founder. The Chinese vessel abandoned the 22 Filipino crew of the Gem-Ver, who were left adrift until a Vietnamese fishing boat came to their rescue.

The incident raised questions on the presence of Chinese vessels in the West Philippine Sea, where the Philippines has exclusive fishing rights.

Duterte justified the Chinese presence by claiming it was part of a fishing deal with Beijing.

Carpio criticized Duterte’s claim, saying Filipinos would be shortchanged if they were indeed to share access to Recto Bank, which is a much larger fishing ground than Scarborough (Panatag) Shoal.

Besides, Carpio said, the Chinese still deny Filipinos access to Panatag’s main lagoon despite the supposed agreement, and even if the international arbitral award on the West Philippine Sea declared the shoal a common fishing ground.

But since Duterte insisted on the fishing agreement during a televised interview with religious leader Pastor Apollo Quiboloy on Tuesday, July 16, Carpio said the Senate must now step in.

“The burden is on the Senate to act now because if it doesn’t act…it will be acquiescing, impliedly consenting to the implementation of a verbal agreement that constitutes a treaty that has not passed through the Senate,” Carpio said.

“It’s a diminution of the power of the Senate.”

The country’s most senior magistrate added that a Senate inquiry into the purported deal would present an opportunity to find out exactly what was agreed between Duterte and Xi, and whether Philippine law allows it. – Rappler.com

Newsbreak Chats: The highs and lows of the Duterte presidency