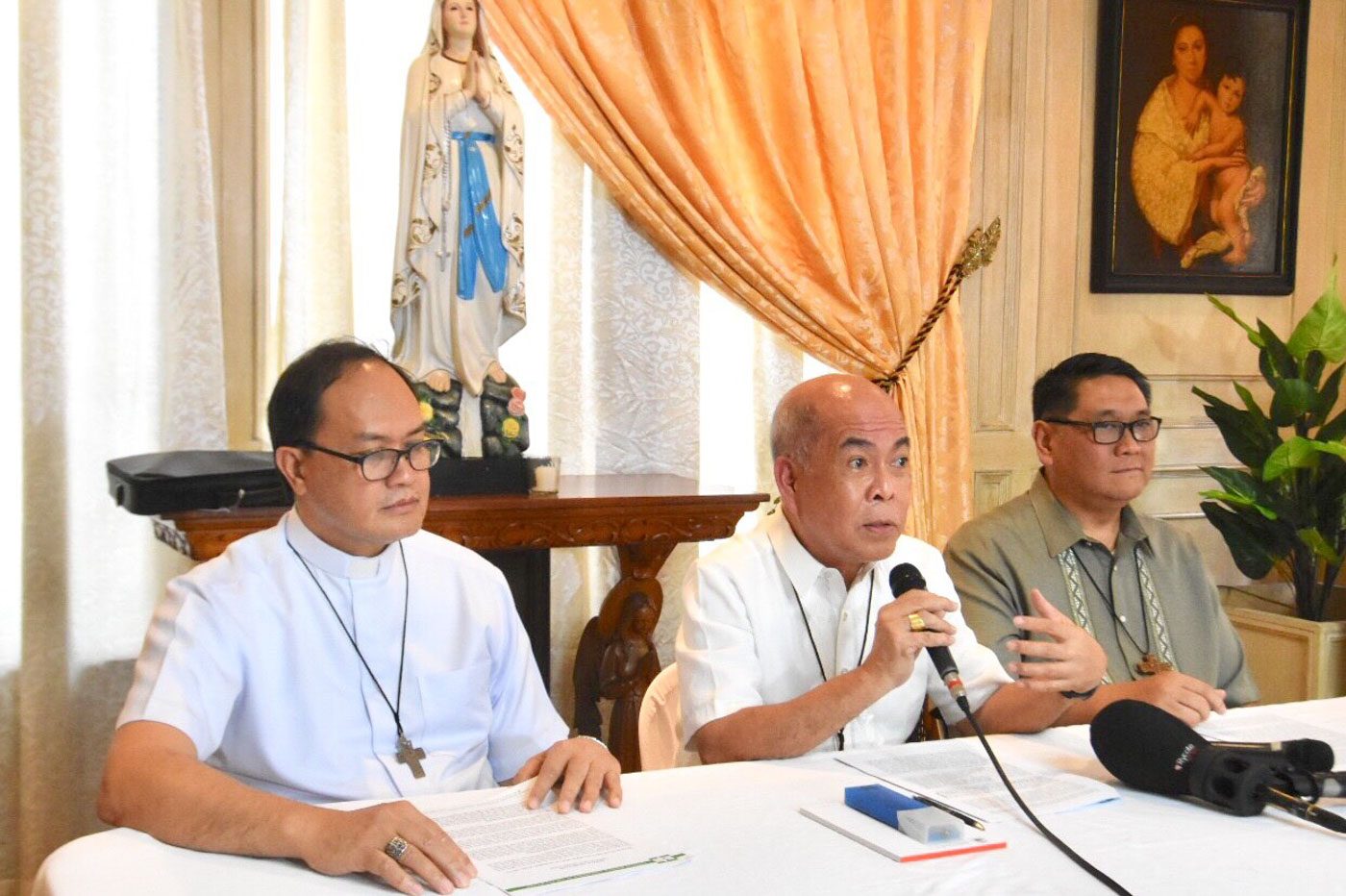 Facebook Twitter Copy URL
Copied
'I cannot bring myself to believe that these bishops were involved in seditious activities; they are bishops whose sincerity, decency, respectfulness and love for our country and our people are beyond doubt,' says Davao Archbishop Romulo Valles of the 4 bishops included in the PNP's sedition complaint

MANILA, Philippines – The president of the Catholic Bishops Conference of the Philippines (CBCP) has come to the defense of bishops who had been accused of sedition, saying the allegations were “beyond belief.”

CBCP president Davao Archbishop Romulo Valles said in a statement  on Friday, July 19, that he was “very saddened” and “greatly disturbed ” by the inclusion of 4 Catholic bishops in the complaint filed by the Philippine National Police Criminal Investigation Group (CIDG) against 35 individuals led by Vice President Leni Robredo.

“That they are accused of sedition and other criminal complaints is for me beyond belief. They may be perceived as very vocal and very critical in their pronouncements. But that they consciously worked promoting seditious activities and other related crimes, these honestly I cannot believe,” Valles said.

“These are individuals whose love for country and dedication for the welfare of our people I cannot doubt. Some of us may feel ill at ease in the way they publicly made known their opinions. But again, I say this: I cannot bring myself to believe that these bishops were involved in seditious activities; they are bishops whose sincerity, decency, respectfulness, and love for our country and our people are beyond doubt,” he added.

Valles said he knew the bishops well, and that he had worked closely with Villegas when the latter headed the CBCP, and CBCP vice president David.

The CBCP president, a long-time friend of Duterte, prayed that those handling the case would be guided by “fairness and truth.”

“I always keep my respect and confidence in the people in government who are involved in the processes regarding the cases filed against these bishops. I pray to the Lord for them, that fairness and truth will guide them,” he said.

Valles also had a special prayer for the 4 bishops: “I pray that they may remain calm and confident that in the end, they will be found innocent. I make this prayer to the Lord, with the Blessed Mother as our intercessor.”

Aside from inciting to sedition, the CIDG also filed cyber libel, libel and obstruction of justice charges against the bishops, Liberal Party members and their staff, members and allies of the opposition, priests critical of the Duterte administration, Free Legal Assistance Group lawyer Theodore Te, and Integrated Bar of the Philippines (IBP) officials. They denied the charges.

The charges stemmed from the viral Ang Totoong Narcolist videos vthat tagged President Rodrigo Duterte and his family in the drug trade. The man who admitted to be “Bikoy” in the videos – Peter Joemel Advincula – earlier surfaced to support the allegations, but later did a complete turnaround by not only recanting the allegations, but also accusing those in the CIDG complaint as behind the videos.

In a Facebook post on Friday titled “Service, Honor, Justice?” David slammed the PNP for filing charges based on “false testimony.”

“One of the 10 commandments says, ‘Thou shalt not bear false witness against thy neighbor.’ The charges of sedition being leveled against us are not only unjust; they are atrocious. They are based on nothing but false testimony,” the outspoken bishop said.  (READ: Caloocan Bishop Pablo David: Shepherd of his slaughtered sheep)

David said that instead of investigating the people in the list provided by Advincula  the cops should instead probe the motive of Advincula for making the false allegations.

“What motivates the supposed witness to give false testimonies is what in fact they should be investigating.  The intention is obvious: pure harassment and an effort on the part of the PNP to do, not their sworn duty, but what they think will be pleasing to the higher authorities,” he added.

David said that the PNP was “in effect doing a disservice, dishonor and an injustice to their own institution and to the few remaining people of integrity among their fellow officers in uniform.”

“Perhaps they should be reminded of their motto, which is summed up in three words emblazoned in big bold letters on their coat of arms: SERVICE, HONOR, JUSTICE,” he said.

David, a vocal critic of Duterte’s bloody drug war, had been on the receiving end of President Rodrigo Duterte’s tirades himself. The Philippine chief had even expressed his suspicion that the bishop was into drugs – a claim denied by the bishop.

David had said in February that since becoming the subject of Duterte’s tirades, he had received death threats.  (LOOK: Death threats vs priests critical of Duterte’s drug war)

A Manila Bulletin report said Ongtico was surprised about his inclusion in the complaint, saying, “I am and will always be a person of peace.” Bacani said in a Radio Veritas interview that the filing of the complaint only “shows how stupid the police are” as they believed someone “completely unbelievable” like Advincula.

The PNP itself had earlier dismissed Advincula as nothing more than an “information peddler” when he first surfaced in public, but later took him in after he changed his story and implicated the opposition and others critical of Duterte’s policies.

Others charged in the complaint have also categorically denied the allegation and dismissed it as harassment, while human rights groups and other organizations said the complaint was intended to stifle dissent. (READ: We must rally behind Robredo, Pangilinan tells LP bloc in House) – Rappler.com