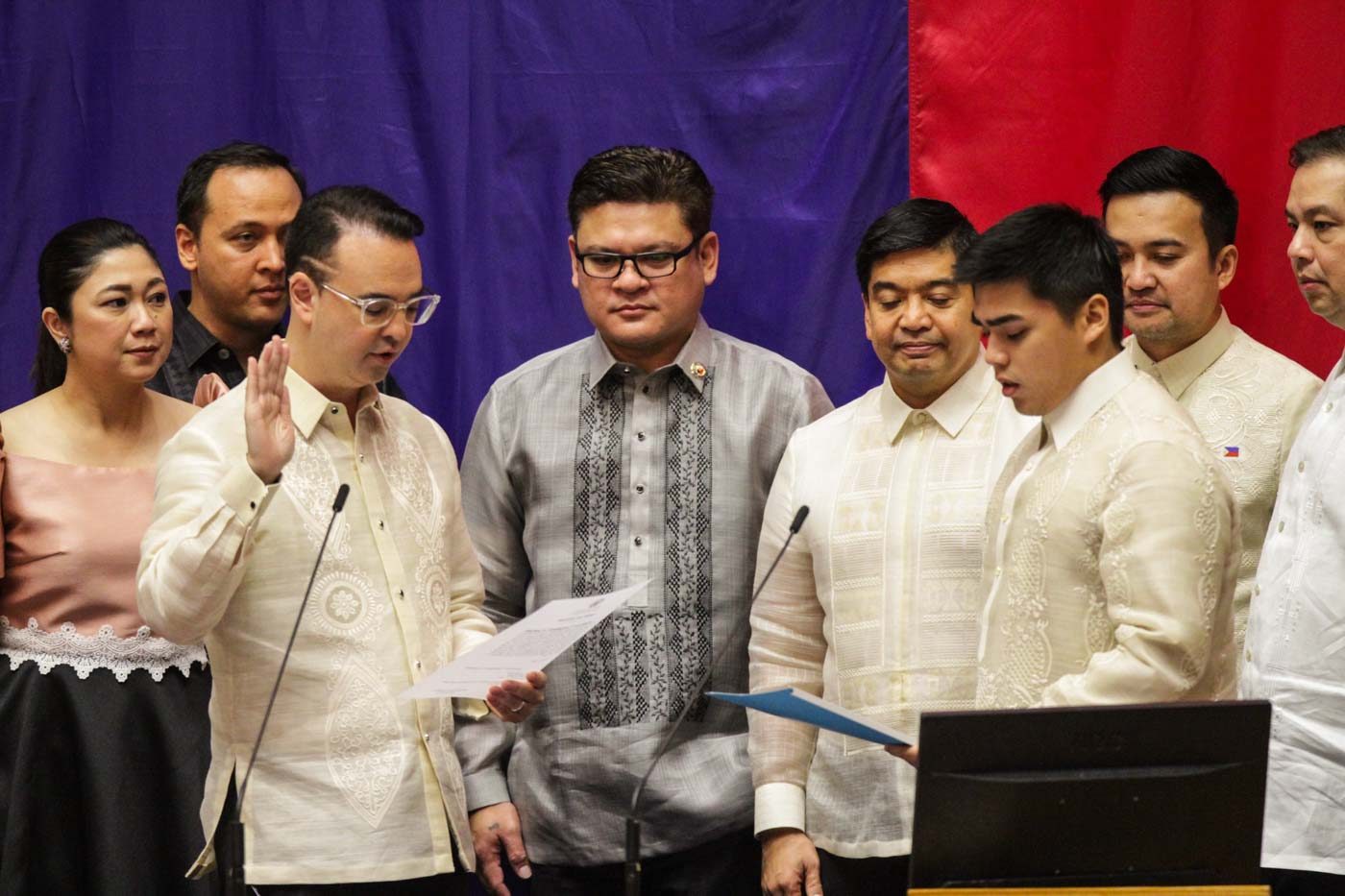 Facebook Twitter Copy URL
Copied
(UPDATED) The Taguig City-Pateros congressman, who faced persistent talks of a challenge up to the last minute, gets 266 votes

MANILA, Philippines (UPDATED) – Riding on the endorsement of President Rodrigo Duterte, Taguig City-Pateros Representative Alan Peter Cayetano was elected Speaker of the House of Representatives on Monday, July 22, as the 18th Congress opened.

Cayetano officially clinched the speakership after getting 266 votes.

Abante, who voted for Cayetano, was nominated as his allies of about 25 lawmakers vied to become the minority bloc. All legislators who did not vote for the winning Speaker  automatically becomes part of the minority bloc.

“I nominate a leader who understands local and national governance, who can ably and fearlessly represent the House of Representatives and the Philippines in the international arena,” Paolo Duterte began as he nominated Cayetano for speaker.

The presidential son caused a few seconds of suspense, as he apparently intentionally delayed the announcement of the name of his candidate for speaker, to the amusement of his fellow lawmakers. Until that morning, it remained unclear if he would back his father’s candidate.

In nominating Cayetano, Velasco described the Taguig congressman as someone with “word of honor” and who could “pursue real change.”

In abstaining from the speakership vote, Atienza said this was out of his “concern for a healthy democracy, in and out of Congress.”

On July 8, Duterte said Cayetano would be Speaker for the first 15 months, to be succeeded by Velasco, who will lead the chamber in the remaining 21 months of the Duterte administration. (READ: Cayetano: I am ‘sincere’ in following term-sharing deal as Speaker)

Romualdez, once a strong contender for Speaker who did not challenge Cayetano anymore, is also set to be elected Majority Leader. He had agreed to the post as part of the term-sharing deal that Duterte helped forge between the 3 aspirants. (READ: Cayetano, Velasco, Romualdez ‘show unity’ before 18th Congress opens)

Up until Cayetano’s election on Monday morning, it was unclear if he had already secured enough votes to become Speaker.

Paolo Duterte even hosted a breakfast for lawmakers on Monday morning at the South Lounge, scheduling it at the same time as a separate breakfast hosted by Cayetano at Nograles Hall.

But less than an hour before the session at 10 am, Paolo Duterte told reporters that he had spoken to his sister Sara earlier that day, and he was told “to respect the decision of the President” regarding the speakership.

This was why Paolo Duterte’s breakfast was brief, lasting only about 20 minutes before legislators were told by Ungab to transfer to Nograles Hall.

Paolo Duterte said he did not attend the breakfast he hosted anymore because he had a separate meeting inside his congressional office. Ungab also joined this meeting.

Paolo Duterte and Ungab later went down to join Cayetano’s breakfast around 9:30 am. At the Nograles Hall, the presidential son was seated between Cayetano and Velasco, and exchanged light banter with them.

Paolo Duterte is set to be elected as Deputy Speaker for Political Affairs, a result of his  compromise with Cayetano.

Though Cayetano was President Duterte’s running mate in the 2016 elections, the Taguig congressman initially had the weakest support among House members, as he failed to cultivate personal relationships with congressmen before announcing his bid for Speaker.

But after Cayetano got the President’s endorsement, lawmakers began throwing their support behind him in order to secure key leadership posts in the House.

On Sunday, July 21, a day before the speakership election, Cayetano met with leaders of major political parties in the House – including Romualdez and Velasco – to show unity among lawmakers. – Rappler.com