MANILA, Philippines – After shutting down world-famous Boracay Island for 6 months, the government is now looking at closing some villages in Palawan’s El Nido.

In a July 16 document acquired by Rappler, the Department of Environment and Natural Resources (DENR) issued a memorandum detailing the cleanup plans for El Nido. It was signed by DENR Mimaropa executive director Henry Adornado.

The DENR, along with the Department of the Interior and Local Government (DILG) and the Department of Tourism, wanted, among others, a “selective closure” of El Nido – just the island’s 4 barangays (villages): Masagana, Maligaya, Corong-Corong, and Buena Sarte.

According to the document, these are “where majority of the non-compliant establishments are located.” The island-town has a total of 18 barangays. (READ: El Nido: Tourism’s boon and bane)

“The closure assessment should be based not only on the compliance on permits but also on the actual operation of establishments,” the memorandum signed by Adornado said.

Adornado wrote that the 3 government agencies “agreed [on] possible closure” but since El Nido now has a different mayor after the May 2019 elections, they “decided to tackle it first” with her.

A meeting has been set on August 2 between DILG-Mimapora and El Nido’s new mayor, Edna Lim.

El Nido municipal administrator Raul Maximo confirmed the existence of the memo, saying that the local government has done steps to prevent the closure.

(We have various initiatives. Easement regulations have been complied with already. One difficulty right now is the issue of water quality. But there are efforts toward additional STP, especially in the private sector.) 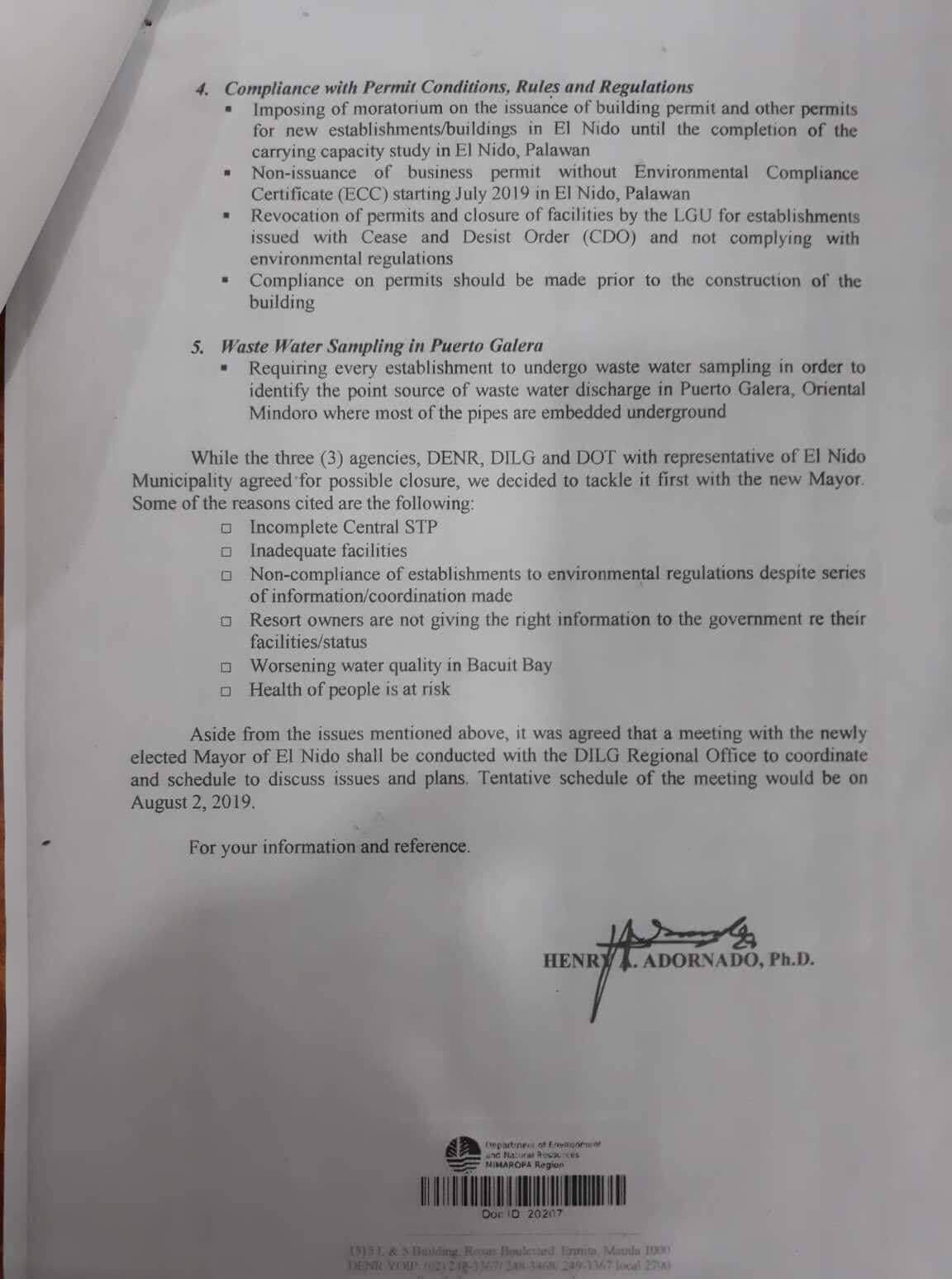 The national government also recommended a moratorium in the issuance of building permits to new establishments in the tourist destination, pending the completion of a carrying capacity conducted in El Nido.

It also asked for the suspension of the issuance of business permits to businesses without an environmental compliance certificate. Waste water sampling will also be tackled.

In March last year, the DENR ordered 32 establishments in El Nido caught violating the easement rule to demolish illegally-built structures. This has been fully complied with, Maximo said.

The Water Code of the Philippines, National Integrated Protected Areas System Act of 1992, and Proclamation No 32 series of 1998 prohibit the occupation, utilization, and construction of any structure within the 3-meter easement zone in a protected area such as El Nido.

Come May 2019, at least 10 hotels were served cease and desist orders for discharging wastewater without valid permits. These were either in El Nido Bay or in Bacuit Bay.

In 2016, at least 144,000 visitors went to El Nido. During her visit in November 2018, Tourism Secretary Berna Romulo-Puyat described it as “overcrowded.” – Rappler.com