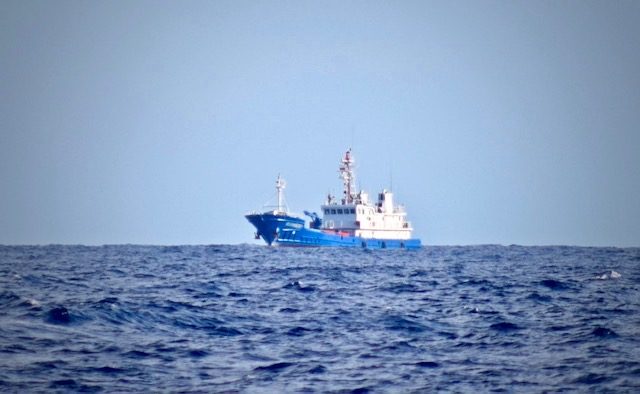 China’s aggressive moves in the West Philippine Sea contradict its officials’ statements that it wants peace in the region, Lorenzana told reporters in a briefing.

Asked whether those moves qualify as China “bullying” Filipinos, Lorenzana said, “Well, the way they took over Scarborough Shoal, to me that was bullying.”

China has practically wielded full control of Panatag (Scarborough) Shoal off Zambales ever since a standoff between Chinese and Philippine ships from April to May of 2012.

For years, the Chinese Coast Guard chased away Filipino fishing crews who tried to approach the shoal, their ships closely tailing the fishermen’s wooden boats, and firing water cannons at those who attempted to enter the main lagoon.

In 2017, as President Rodrigo Duterte sought broader ties with China, then Foreign Secretary Alan Peter Cayetano, now the House Speaker, said Filipino fishermen have “returned” to Panatag Shoal in exchange for shelving an international arbitral award of the Philippines’ sovereign rights in the West Philippine Sea.

However, despite the government’s claims, the China Coast Guard still prevents Filipino fishing boats from entering the main lagoon, which serves as a shelter from rough seas, and where fishermen can haul in a significantly bigger catch than in any of the surrounding waters.

Filipino fishermen have reported a decline of 30% to 40% in their earnings ever since they were driven away from Panatag Shoal.

The July 12, 2016 international arbitral award based on the United Nations Convention on the Law of the Sea (UNCLOS) declared Panatag Shoal a common fishing ground where no country can claim exclusive ownership or access.

The shoal is nearer to the Philippines than to any other country, and lies within its 200-nautical-mile exclusive economic zone (EEZ).

A Pulse Asia opinion survey conducted last month found that 74% of Filipinos had little or no trust in China at all – a 13-percentage-point drop in China’s trust rating in March – following the Recto Bank incident on June 9 in which a Chinese ship hit a Filipino fishing boat and left its 22 crew members marooned.

“The Chinese, since they started grabbing islands there and bullying people around, siyempre magdududa ‘yung tao (of course people will be suspicious [of them]). Until such time masabi ko na (I can say) the behavior of the Chinese will match their rhetoric, then the low trust of the Philippines will continue.”

Such actions, and the recent passage of Chinese warships in the Sibutu Strait in the waters of Tawi-tawi without notice to the government, are examples of China’s inconsistency in dealing with the Philippines, the defense chief added. – Rappler.com