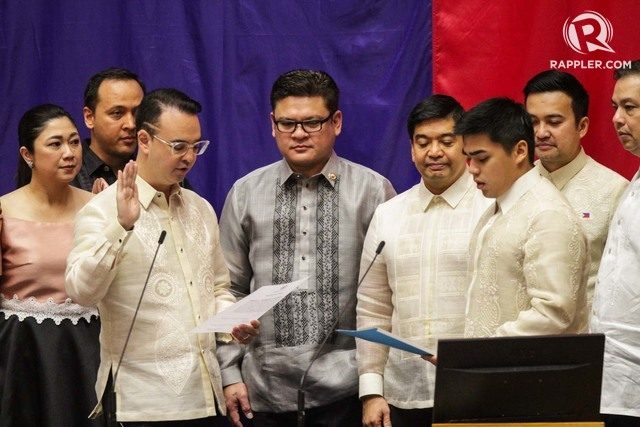 In a statement sent to reporters on Tuesday night, Zhao said China “stands ready” to work with Cayetano “towards more amicable and brighter bilateral relations” by deepening “exchanges and cooperation” between the two countries’ legislatures.

Zhao also extended Li Zhanshu’s greetings and congratulations to Cayetano. Li is chairman of the Standing Committee of the National People’s Congress of China.

The Chinese Embassy said Zhao called upon Cayetano for a meeting on Tuesday where he was joined by Cavite 8th District Representative Abraham Tolentino and Bases Conversion and Development Authority president Vince Dizon.

During the meeting, Zhao hailed Cayetano for his “significant contributions” in promoting relations between Manila and Beijing “as an old and good friend of Chinese people.”

Special message: It is rare for a Philippine lawmaker to receive congratulatory messages from a foreign country. Before he assumed the speakership, Cayetano had served as the Philippines’ top diplomat who sought stronger ties with China and voiced openness to conducting joint exploration of the West Philippine Sea.

During his stint as foreign secretary, Cayetano was criticized for cozying up to China as Manila and Beijing remain embroiled in a dispute over the West Philippine Sea in the South China Sea.

With Cayetano now serving as House Speaker, he gave assurances that friendly ties between Beijing and Manila would continue.

In receiving the congratulatory message from China’s leadership, Cayetano also thanked the Asian giant for providing economic and social benefits to the Philippines.

According to the Chinese Embassy, Cayetano said he would “firmly follow” a friendly policy with China to bring Philippine-China relations “to a new high.”

China had earlier hailed Cayetano for a “full turnaround” of bilateral relations between China and the Philippines which helped bring the two countries “back in the right path.” – Rappler.com