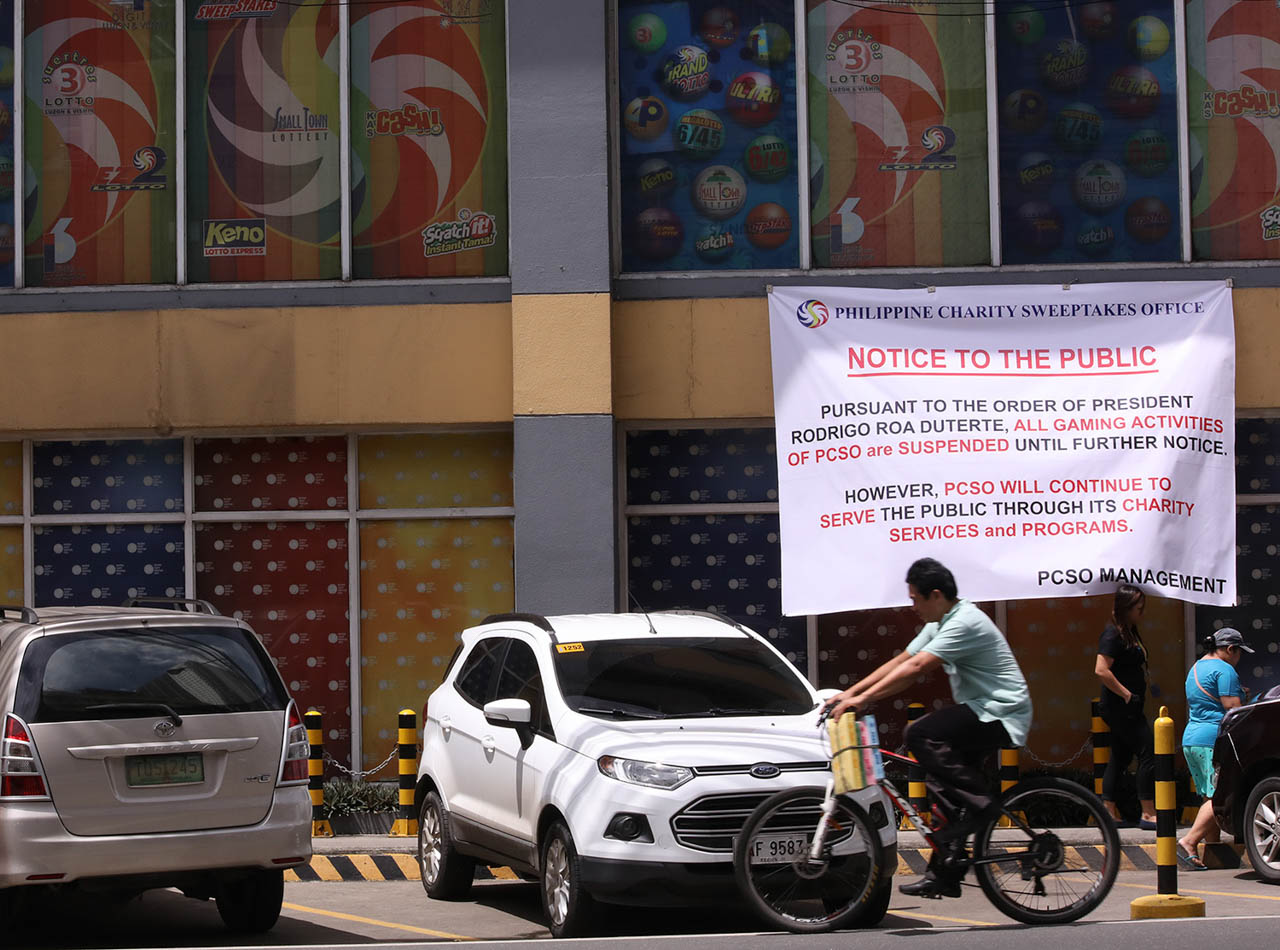 MANILA, Philippines – The Philippine Charity Sweepstakes Office (PCSO) has not remitted P8.4 billion worth of dividends to the national government since 1994, yet it was found to have spent over a billion pesos on perks for its officials and employees that auditors said were either irregular or excessive.

Audit reports on the PCSO from 2010 to 2016 show that the agency spent at least P1.58 billion on perks which had been flagged by the Commission on Audit (COA) through the years.

President Rodrigo Duterte initially shut down all PCSO gaming operations through a verbal order to show his frustration over alleged corruption in the agency. A few days later, he allowed lotto operations to resume, again based on a verbal order. (READ: Legal issues with Duterte’s PCSO gaming shutdown) 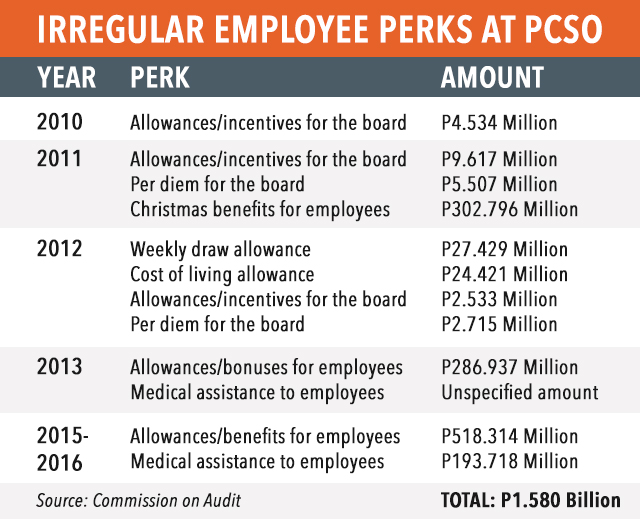 PCSO board members received millions in allowances and incentives over the years, which COA said were paid despite executive orders in 2010 and 2011 suspending all allowances, bonuses, and incentives for board of directors and trustees of government-owned and -controlled corporations (GOCCs) and government financial institutions (GFIs).

The board again received allowances and benefits in 2012 – in violation of an executive order reiterating that board members of GOCCs and GFIs are not allowed to receive perks unless specifically authorized by law or the Office of the President, according to COA.

Not only did the board receive allowances and benefits, their per diems also increased, again violating the same executive order, COA said.

They did that again in 2013, giving benefits to officials and employees “without sufficient legal basis, or without approval from the Office of the President (OP).”

By 2014, auditors had already issued notices of disallowance or a refund mechanism against the PCSO, but the agency continued granting allowances and benefits.

The PCSO also provided medical assistance to its employees in 2014 under its Employee Medical Access Program (EMAP), which COA said violated Republic Act (RA) No. 6758 on salaries classification and RA 10149 or the GOCC Governance Act.

The same happened in 2015 and 2016 despite notices of disallowance.

For the years 2015 and 2016, despite the flagging of auditors, PCSO spent P193.718 million for medical assistance for its employees which it charged to the charity fund of the agency.

“The charging of EMAP expenses with an aggregate amount of P193.718 million to Charity Fund had resulted in the improper disbursement of government funds and reduced financial assistance granted to the indigents and marginalized sector in the community,” said auditors.

The PCSO has also been confronted with the problem of non-remittance of dividends to the national government.

The 2018 audit report of the PCSO said that the unremitted dividends have reached a total of P8.426 billion, the aggregate amount from 1994 to 2017.

From 1994 to 2017, the PCSO recorded total net earnings worth P16.852 billion. Auditors said the PCSO should have remitted half of that amount or P8.426 billion in dividends to the national government.

But the PCSO, backed by the Office of the Government Corporate Counsel (OGCC), has argued that it is not covered by RA 7656 “as its net earnings were already allocated by law and earmarked for certain expenses.”

The PCSO added that all its unutilized funds have been reverted to its charity fund.

But the COA disputed the interpretation, saying PCSO “is not among the GOCCs exempted from the coverage of RA No. 7656, specifically enumerated under Section 4 of the Revised IRR to RA No. 7656 (2016).”

COA has secured the backing of the Department of Finance, but PCSO is still appealing that no one has disputed that the agency is also mandated that all balances of any fund shall be reverted to its charity fund.

This issue is still under contention.

Justice Secretary Menardo Guevarra said the non-remittance of proper shares is among the problems being investigated by the National Bureau of Investigation (NBI).

“It will focus on allegations that proper government share is not being remitted by Small Town Lottery or Peryahan ng Bayan and so forth,” Guevarra said.

While COA did not flag PCSO for employee perks in 2017 and 2018,  it was in 2017 when PCSO was called out for extravagant expenses.

The PCSO held its Christmas party that year at the EDSA Shangri-La Hotel at a cost of P2.2 million.

Auditors said there was a cheaper option that would “would have costed P1.38 million only.”

“It resulted in the incurrence of extravagant expenditure in the amount of P.820 million, which was disallowable in audit pursuant to COA Circular No. 2012-003 dated October 29, 2012,” said COA.

Also for their Christmas party, the PCSO spent P1.469 million for “goods and services” contrary to COA rules. It also held sports activities where the agency spent P541,000 on uniforms of participants, which  “exceeded the amount allowed under the CY 2017 General Appropriations Act (GAA) by P411,834.”

Irregularities in cash advances had also been a perennial problem for the PCSO.

As early as 2010, auditors had warned against giving cash advances to co-terminus officials as it “posed the risk that the funds may not be liquidated and/or refunded if not utilized.”

In 2012, a board director’s cash advances worth P1.68 million could not be settled because of delays from the PCSO side.

By 2014, auditors called out PCSO for delayed submissions of quarterly reports on its cash advances. That year, P15.247 million in cash advances were not liquidated.

That problem recurred in 2017, when officers failed to liquidate P14.706 million worth of cash advances.

Moreover, the PCSO granted in 2017 P14.9 million worth of cash advances to officials with outstanding unliquidated balance from previous years.

The PCSO had said it would appeal Duterte’s shutdown order on its revenue-generating games, so it can fulfill its primary task of assisting Filipinos in need. – Rappler.com