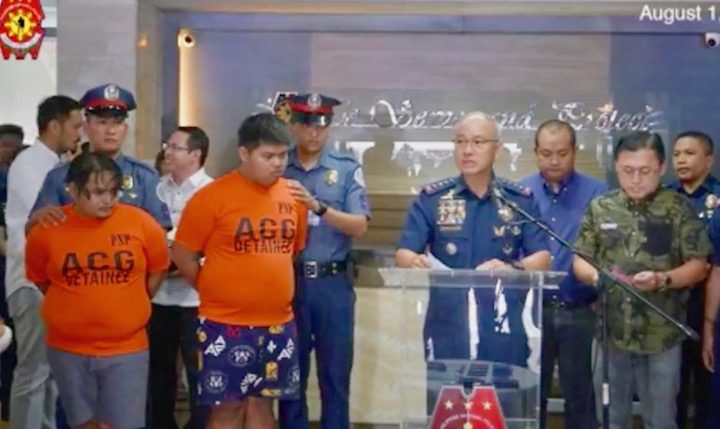 Facebook Twitter Copy URL
Copied
Senator Bong Go claims the suspects also tried to get money from him, but he immediately recognized it as a scam

MANILA, Philippines – A pair of alleged scammers who posed as a congressman to solicit tens of thousands of pesos from lawmakers and a vice governor were arrested by the Philippine National Police (PNP) and presented to media on Thursday, August 1.

The police will file cases of identity theft and estafa against the two.

How the arrest happened: Albayalde said one of the suspects called Revilla, introduced himself as Fuentebella, and asked for P15,000. That’s when Revilla approached cops, who then organized an entrapment operation.

Revilla deposited P15,000 to a Metrobank account of the two. The PNP’s Anti-Cybercrime Group was able to track down and arrest the suspects after they made a withdrawal on Wednesday.

Recovered from the suspects were mobile phones, access devices, and unregistered sim cards which police believe they were going to use for more scams.

Senator Bong Go’s appearance: Along with Representative Fuentebella, Senator Bong Go stood behind Albayalde during the announcement. He was then given the floor to recount his own experience with the alleged scammers.

According to Go, the suspects used a number through messaging application Viber and used a photo of Fuentebella as their profile picture.

The new senator said he immediately recognized it as a scam, since scammers would also try to contact them in Malacañang, where he used to be President Rodrigo Duterte’s special assistant. He added that the same duo supposedly also tried to scam neophyte senators Imee Marcos and Francis Tolentino.

Go then recounted that he deposited only P1 to the account of the two before confronting them that he knew what they were doing. The two allegedly just hung up on Go before they proceeded with calling Revilla. – Rappler.com