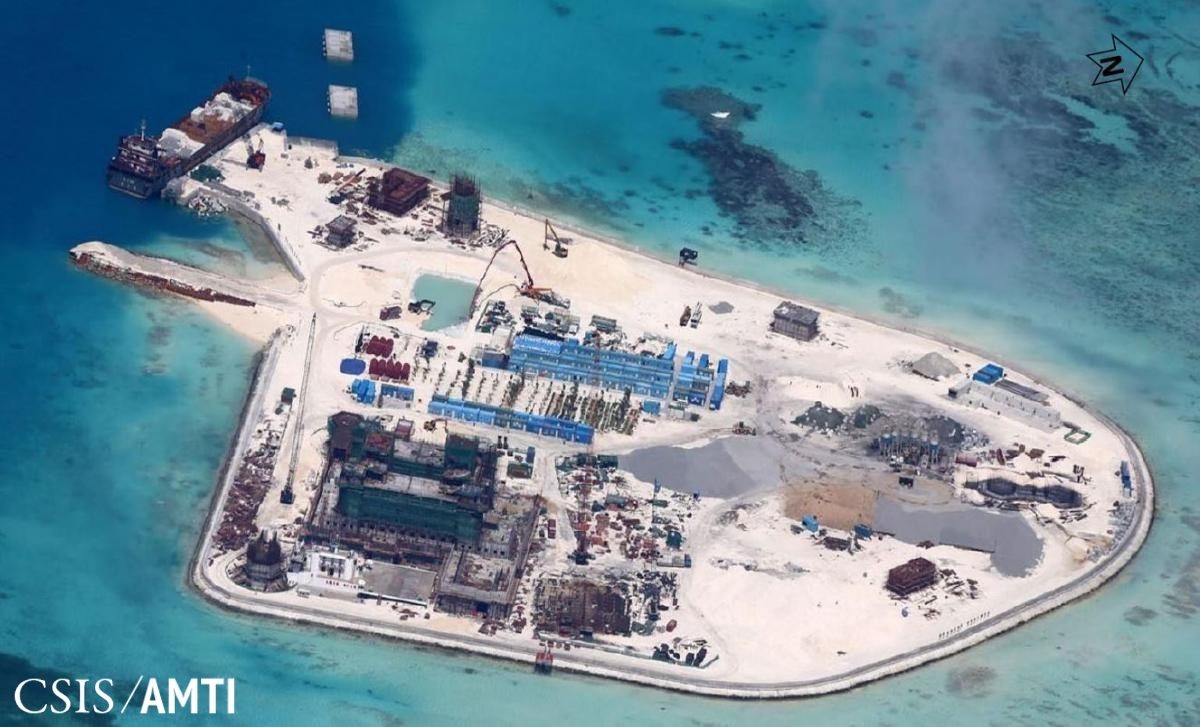 MANILA, Philippines – The Philippines has “possession and position” in the West Philippine Sea, the Department of National Defense (DND) said on Thursday, August 1, in a statement on President Rodrigo Duterte’s much-criticized remark in his 4th State of the Nation Address (SONA) on July 22.

DND spokesperson Director Arsenio Andolong said “the Philippines has two documents to support its claims versus none for the Chinese,” citing the 1982 United Nations Convention on the Law of the Sea (UNCLOS) and the 2016 UNCLOS arbitral award as bases of the Philippines’ sovereign rights in the West Philippine Sea.

“Thus, the Chinese presence in the West Philippine Sea is akin to somebody squatting on a piece of land owned by someone else,” Andolong said.

In his SONA, Duterte said the Chinese could not be driven away from the West Philippine Sea because they were “in possession” of it.

The remark drew strong criticism from Supreme Court Senior Associate Justice Antonio Carpio, who pointed out that China’s reclaimed outposts in the West Philippine Sea only comprised 7% of its total area, which falls within the Philippines’ exclusive economic zone (EEZ).

National Security Adviser Hermogenes Esperon Jr afterwards claimed that the word Duterte used was “position” and not “possession,” meaning China had a “positional advantage” in the West Philippine Sea.

However, the official transcript of the SONA from the Office of the President does use the word “possession” – twice.

“China also claims the property and he is in possession. ‘Yan ang problema. Sila ‘yung (That’s the problem. They are the ones) in possession and claiming all the resources there as an owner,” the official transcript of Duterte’s speech states.

This latest statement from the DND said China “is in position, and to a certain degree, has possession of only a very small part of the South China Sea” because of its militarized artificial islands in the area.

“South China Sea” is the international name of the sea that connects the Philippines, Taiwan, China, Vietnam, Malaysia, Indonesia and Brunei.

“West Philippine Sea” is the term used by Filipinos to refer to their EEZ within the South China Sea, which includes the 7 reefs that China reclaimed.

The Philippines has control over 9 islets in the same area, including Pag-asa Island, which hosts a civilian community of about 250 Filipinos.

“In the same vein, the Philippines also has possession and position in the West Philippine Sea,” Andolong said.

“We have to clarify, however, that possession, position, and control are different realities that do not necessarily exist together. Although several claimant countries are occupying features in the South China Sea, not one of them has complete and sole control over that entire body of water,” he added.

Andolong defended the Duterte administration amid criticism that the country lost ground to China after it shelved the UNCLOS arbitral award to broaden ties with Beijing.

“It must also be pointed out that the Philippines never gave up any of its positions in the WPS during the Duterte Administration and, in fact, it is improving the existing facilities of its biggest island, Pag-asa, to accommodate more residents and personnel,” Andolong said.

A source from Pag-asa told Rappler that Chinese vessels continue to ply the waters around the island, especially when Philippine ships deliver construction supplies.

The government is building a beaching ramp and paving the airstrip on Pag-asa Island.

On Wednesday, July 31, Foreign Affairs Secretary Teodoro Locsin said he had “fired off” a diplomatic protest against China for its vessels’ “swarming” of Pag-asa from July 24 to 25.

The possession/position affair from Duterte’s last SONA drew controversy and highlighted criticism that his administration is too favorable to Beijing.

Duterte was, in fact, asserting a supposed “fishing deal” he made with Chinese President Xi Jinping that allows the Chinese to fish in the West Philippine Sea, which he said was the reason he could not drive them away.

On June 9, a Chinese trawler ran into an anchored Philippine fishing boat at Recto Bank off Palawan and left its 22 Filipino crew marooned.

Duterte downplayed the incident as concerns were raised that Chinese trawlers may be maritime militias in disguise.

The DND statement from Andolong states a tougher line.

“We are ready to defend our sovereignty and sovereign rights using whatever means available to us,” Andolong said.

“Likewise, every able-bodied Filipino should be ready to fulfill his or her duty when the time comes.” – Rappler.com