Aug 1, 2019 11:12 PM PHT
Marchel P. Espina
Facebook Twitter Copy URL
Copied
'Anthony or any member of our family is not a communist sympathizer as portrayed by the people who want to harm and kill us,' says the lawyer's sister Andrea Trinidad 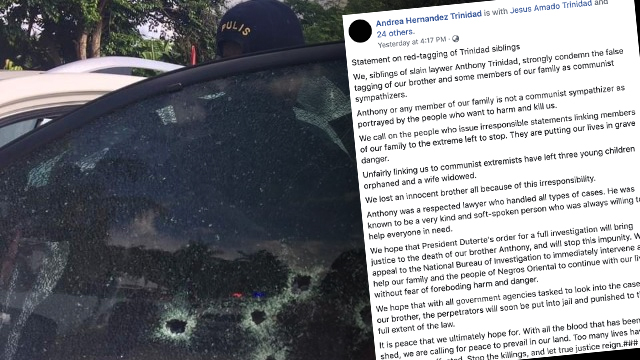 NEGROS ORIENTAL, Philippines – The family of Anthony Trinidad, the lawyer who was shot dead in Guihulngan City, Negros Oriental on July 23, condemned the red-tagging of their kin.

Andrea Trinidad, sister of the murdered lawyer, said “Anthony or any member of our family is not a communist sympathizer as portrayed by the people who want to harm and kill us.”

“We call on the people who issue irresponsible statements linking members of our family to the extreme Left to stop. They are putting our lives in grave danger,” she said.

She added that “we lost an innocent brother all because of this irresponsibility. Unfairly linking us to communist extremists have left 3 young children orphaned and a wife widowed.”

She said that her brother was a respected lawyer who handled all types of cases.

“He was known to be a very kind and soft-spoken person who was always willing to help everyone in need.”

She said they are hoping that President Rodrigo Duterte’s order for a full investigation will bring justice to their brother and will stop impunity.

They also appealed to the National Bureau of Investigation to immediately intervene and help their family and the people of Negros Oriental to continue with their lives without fear of foreboding harm and danger.

“We hope that with all government agencies tasked to look into the case of our brother, the perpetrators will soon be put into jail and punished to the full extent of the law,” she said.

On July 23, Anthony was on his way home from a court hearing when two motorcycle-riding gunmen shot him and his wife. He was declared dead upon arrival at the hospital while his wife survived the shooting.

The slain lawyer was also a cousin of former Ayungon mayor Edsel Enardecido, who was killed in his home at Barangay Tampocon 1 just 4 days after Anthony was ambushed.

“The past days have been very difficult for our family. After our brother Anthony was murdered in broad daylight, our cousin, former mayor Edsel Enardecido, was killed in cold blood inside their home,” Andrea said.

Anthony Trinidad and Edsel Enardecido were among the 21 people shot dead in Negros Oriental in 10 days, from July 18 to July 28. – Rappler.com