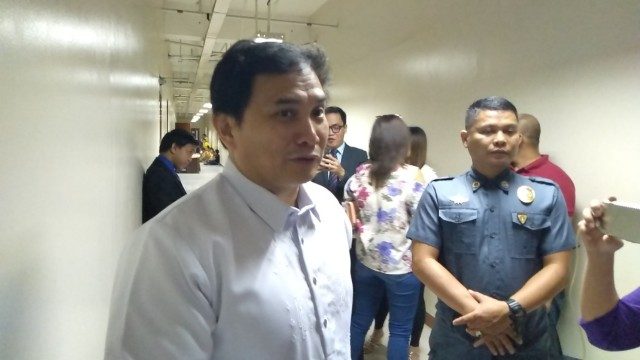 Aside from this case, Niño is also a suspect in the murder of his wife, Gisela. The parricide case is also pending in court.

Leyson was in tears as she recounted how 6 armed men entered the room at Dive Camp Resort in Bien Unido town in June 6, 2017.

The mayor – who was a former commercial pilot for Air Asia Philippines – was only a year into her first term term when she was allegedly kidnapped, murdered and dumped into the sea somewhere between Mactan Island and Bohol. Gisela’s body has yet to be found to this day.

“I saw someone open the door and shut off the lights, a man in a mask grabbed Gisela, pulled her hair and punched her in the stomach,” Leyson said during her testimony on Thursday, August 1.

Leyson told the court that she and Gisela were supposed to return to Cebu City the same evening, but were convinced by the municipality’s executive secretary Brian Sayson, and tourism officer Wilfredo Hoylar, to go to Bien Unido to sign documents related to her municipality.

The two were driven to Bien Unido town by Randel Lupas, who previously testified against Niño in March.

He asked questions for about 1 hour and 30 minutes on Leyson’s recollection of the evening when Gisela was abducted.

During the examination, Leyson said that although the men were wearing masks, she recognized the voice of Niño. She also said that she heard Gisela refer to the man grabbing her hair as “In-In,” Niño’s nickname.

She also heard the man say, “gipakaulawon ko nimo. Nanglaki pa gyud ka (You embarrassed me. You also cheated on me with another guy)!”

In her mind, Leyson said, that statement confirmed that the masked man speaking was Niño.

Leyson narrated how she was beat up, tasered and had duct tape wrapped over her mouth. She testified that when she was trying to plead with the men in the room while being bound, she heard Niño say, “hiposa na na. Saba na kaayo na (get rid of her. She’s too noisy).”

Leyson woke up hours later with Gisela already gone, but said she recognized the faces of Hoylar and Lupas helping her get up and dressed when she woke up.

Meanwhile, as Leyson was testifying, Niño was in court with his head down looking into a book. He did not react to any part of Leyson’s emotional testimony.

He addressed the court only once when he was asked to confirm his identity.  This was immediately after the prosecutor told Leyson to point out if the defendant was the room.

He said the testimony “sends a strong message that the evidence of the prosecution is not something that the defense cannot just throw away.”

Romero Boniel, Niño’s counsel, said that there was no illegal detention if the events happened as Leyson described them. He said it was not established that Leyson and Gisela were forcibly taken.

The parricide case against Niño Rey for the murder of Gisela is being tried separately at the Lapu-Lapu Regional Trial Court.

The parricide case was dropped by state prosecutors in 2018, but refiled after public outcry.

Leyson will continue her testimony on August 8, after prosecutors requested a recess to not exhaust witness Leyson. – Rappler.com