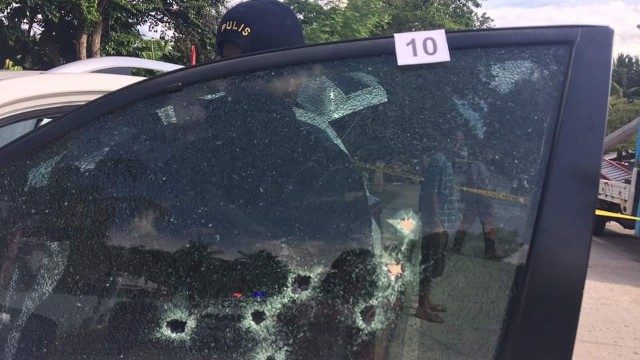 “Three cases have been filed in court on the 11 shooting incidents monitored in Negros Oriental,” the Philippine National Police Region VII Office said in a statement.

Suspect Jimlan dela Cruz and 3 other “John Does” were charged for the murder of Marlon Ocampo and his one-year-old child Marjun Ocampo, killed in Santa Catalina town in July. Authorities said the killing was a reprisal against Marlon for being a “former NPA.”

In the murder of Federico Sabejon, who was killed in Siaton town on July 26, murder charges have been filed against suspects, although authorities did not divulge the name of the suspects pending their arrest and for security reasons. The arrests were made based on statements from the victim’s family. Police are eyeing revenge as the motive for the killing.

For the killing of Alegre and Felomino Janayan, who were shot in Zamboanguita town on July 24, Oscar Bordago Calihan and 3 other unidentified suspects were charged with double murder.

For the deaths on July 25 of school principal Arthur Bayawa and his sister Ardale, a Department of Education official in Guihulngan City, Negros Oriental, police pointed to a land dispute as the reason for the killing.

Police officials connected the riding-in-tandem killing of lawyer Anthony Trinidad to the killing of the Bayawa siblings. Police said Trinidad represented the Bayawas in a land dispute.

Police said they are also looking into his alleged links to left organizations as a possible motive for the killings.

Trinidad was killed on July 23 in Guihulngan City when gunman approached the side of his vehicle and unloaded several shots into Trinidad’s car.

Police have not yet named any suspects in the killings of the Bayawas nor Trinidad.

Amid the increased number of killings in Negros Island, President Rodrigo Duterte said he would “do something drastic” to address violence in one of the largest islands in the Visayas.

At least 7 suspects have been arrested in connection with the ambush of 4 police officers in Ayungon town on July 18.

According to local media reports, latest suspect Jojo Ogatis was arrested in Ayungon on August 3 after witnesses identified him as one of the suspected killers in the ambush of police officers. He had just left his wedding when he was apprehended by police.

Duterte has blamed the New People’s Army for the spate of killings and said he would consider declaring martial law to stop the killings. – Rappler.com