Aug 9, 2019 10:54 AM PHT
Pia Ranada
Facebook Twitter Copy URL
Copied
Asked who is 'delaying' the completion of the South China Sea Code of Conduct, President Rodrigo Duterte says, 'It could be China. Nobody else is asking us to wait.' 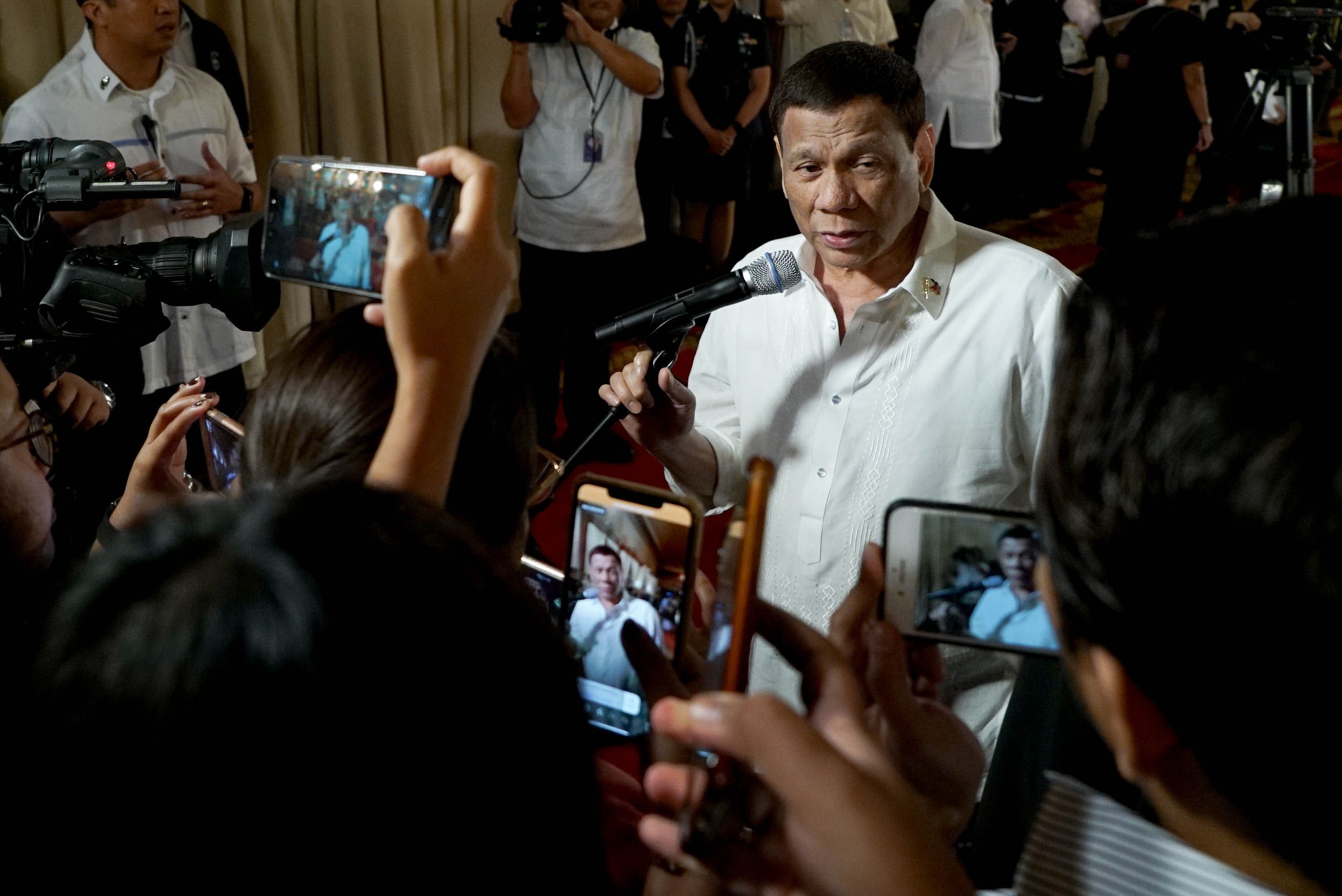 MANILA, Philippines – President Rodrigo Duterte thinks China might be behind the “delay” in finalizing the Code of Conduct in the South China Sea, saying one reason for his upcoming China trip is to hasten the completion of the binding document.

“That’s why I’m going there. They are delaying it and it’s causing so many incidents and one day it will – one mistake, a miscalculation there and mahirap na bawian ‘yun (it will hard to take that back),” said Duterte on Thursday, August 8, in an interview with reporters in Malacañang.

Asked who he meant by “they,” Duterte said: “It could be China. Nobody else is asking us to wait.”

The Code of Conduct (COC) is a set of protocols or guidelines that China and Southeast Asian countries with claims in the South China Sea will agree to follow to avoid any conflict in those waters.

The Declaration of the Conduct (DOC) of Parties in the South China Sea signed by China and the Association of Southeast Asian Nations in 2002 paved the way for the COC.

China had been seen as dragging its feet on the COC, whose framework was only finalized in 2017 – when ASEAN was chaired by the Philippines under the China-friendly Duterte.

Of the claimants to the South China Sea, 5 are ASEAN members: Brunei, Indonesia, Malaysia, the Philippines, and Vietnam.

Duterte said on Thursday that he would raise the issue of the COC with Chinese President Xi Jinping in his upcoming visit to China, which Malacañang has said may take place end of August.

Presidential Spokesman Salvador Panelo had earlier said Duterte would have a “one-on-one dialogue” with Xi.

“One is ‘yung, bakit wala pa ‘yung – matagal eh, ‘yung Code of Conduct (One is, why is still there no – it’s taking long, the Code of Conduct). It’s becoming a very big issue. I do not want trouble for my country but whether we like it or not, however, on which side you are, it would not be good for my country to be in a state of violence,” said Duterte.

The Philippine leader had expressed “disappointment” about the COC at the ASEAN Summit last June in Thailand, according to the Palace.

Then as now, Duterte had warned that the longer the COC is not finalized, the higher the chances that maritime incidents and “miscalculations” could happen in the South China Sea.

He had brought this up at the summit weeks after a Chinese vessel rammed into and sank Filipino fishing boat Gem-Ver in Recto Bank in the West Philippine Sea. China claims the area but a 2016 international ruling affirmed it belongs to the Philippines.

Malacañang had also previously said Duterte planned to assert the 2016 ruling before Xi during his upcoming trip.

On Thursday, Duterte emphasized that the Philippines stood by that historic ruling.

“We cannot accept that (China’s claims). We are not allowed to accept that China owns it (West Philippine Sea) because of the arbitral ruling,” said the President.

But Duterte also planned to discuss a proposal to share resources in the West Philippine Sea with China.

He said he was amenable to a 60-40% sharing scheme, supposedly proposed by Beijing.

“And they have proposed a 60-40. That’s okay with me,” he said, clarifying afterwards that the 60% is for the Philippines.

But how would the two states enter into an agreement over an area both claimed?

Duterte said there could be a way to collaborate in taking the resources without making any concessions on who owns what.

“I’m most interested in the exploitation of the natural resources. For me, if it’s without touching on the validity of who’s the real owner, takes time, we can start the talks. But I’m most interested in the extraction of the natural resources,” said the Philippine chief. (READ: ‘Oil is everything’ – Duterte’s rhetoric on West PH Sea joint exploration)

In November, the two countries signed a Memorandum of Understanding  on joint oil and gas exploration. Carpio said then that the MOU is “safe” since the joint exploration would be pursued through service contracts which clearly state the Philippines’ sovereign rights over the areas to be explored. – Rappler.com