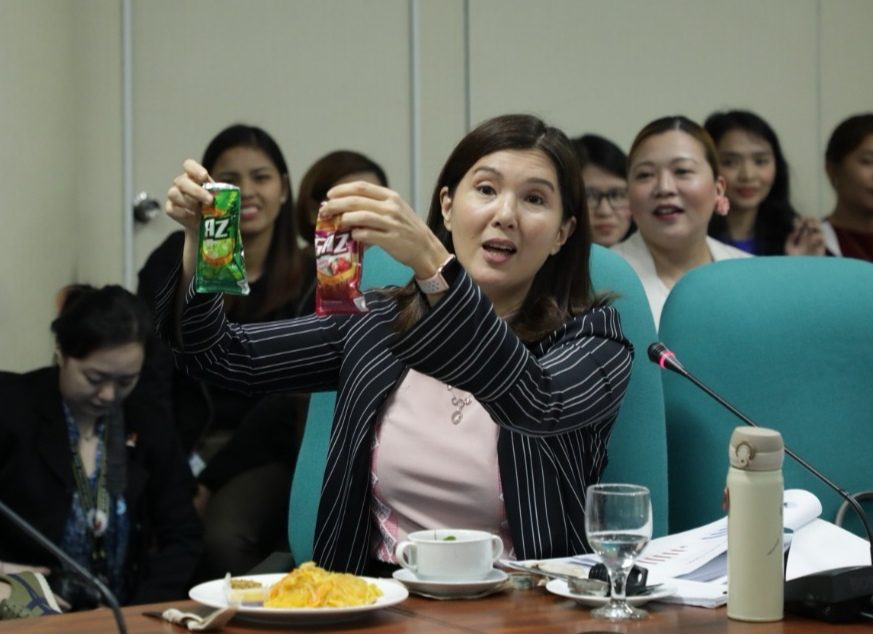 Facebook Twitter Copy URL
Copied
The Department of Finance wants to raise the total excise tax of a particular alcopops brand from P1.30 per pack to P8. But Senator Pia Cayetano first wants a repackaging of the alcoholic drink.

MANILA, Philippines – Senator Pia Cayetano wants a particular type of flavored alcoholic beverages pulled out from stores and be repackaged, saying it is made to look like a child-friendly drink when it actually has a high alcohol content.

Called “alcopops,” the beverage can be mistaken for a fruit juice but it has an alcohol content of 7% for its 200 ml packaging, said Cayetano at a Senate ways and means committee meeting on Thursday, August 15.

“We’re trying to sell a product that has 7% alcohol and is packaged to make it very attractive to children. It is unethical and unlawful,” Cayetano, the committee chair, said

The Department of Finance (DOF) presented the alcopop packages at the meeting on the  Comprehensive Tax Reform Program (CTRP), which includes the proposed excise tax hike for alcohol and e-cigarettes. (READ: DOF urges lawmakers to speed up alcohol excise tax hike)

A particular alcopops brand, currently priced at P25 per 200 ml, has a total excise tax of only P1.30 per pack, for example. The DOF wants to raise its tax to P8 per pack.

But it was the alcopop’s bright and colorful packaging that caught Cayetano’s attention. She asked the Food and Drug Administration to pull the products out from store counters and regulate its packaging.

At the House of Representatives, the measure on the proposed tax increase on alcoholic products was  approved on second reading on Wednesday, August 14, after the bill was substituted by another version to include provisions on increasing taxes on e-cigarettes.

The Senate ways and means committee will hold another hearing on Tuesday, August 20, to focus on Package 2 of the CTRP or the Tax Reform for Attracting Better and Higher Quality Opportunities bill which was not passed during the 17th Congress due to “lack of time.” (READ: Things you need to know about Trabaho bill)