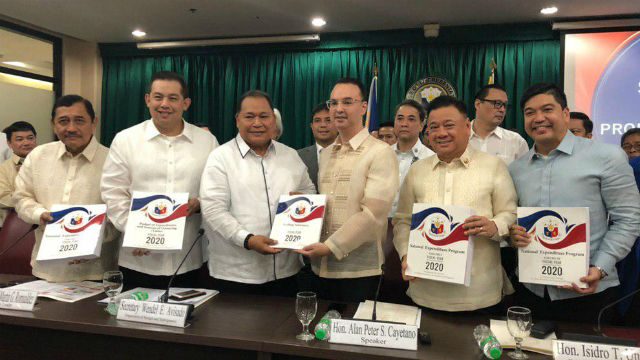 MANILA, Philippines – The national budget proposed by the administration of President Rodrigo Duterte for 2020 shows it is prioritizing infrastructure, social services like education and universal health care, and peace and national security.

The Department of Budget and Management (DBM) submitted on Tuesday, August 20, the proposed P4.1-trillion budget or National Expenditure Program (NEP) for 2020 to the House of Representatives.

The submission marks the beginning of the House’s deliberations on the 2020 budget, which lawmakers plan to pass on 3rd and final reading before the 18th Congress takes a break in October.

The Duterte administration is also prioritizing education, as the Department of Education will once again get the lion’s share of the budget among all government agencies with a proposed budget of P673 billion.

Part of this figure is the P68.5-billion allocation for state universities and colleges and P35.4 billion for the free tuition law.

The universal health care program will also get P166.5 billion, P67.4 billion of which will go the Philippine Health Insurance Corporation.

Other social protection programs prioritized under the 2020 budget are the following:

Duterte, who is waging a bloody anti-drug campaign, also put the Philippine National Police (PNP) on top of his list of priorities in his budget message. Of the P184.8-billion proposed budget for the police force, P546 million will fund the implementation of the Philippine Anti-Illegal Drug Strategy of the Dangerous Drugs Board. Another P14.4 billion will be used to help fill up 26,685 positions in the PNP.

The Department of National Defense will get P189 billion to fund its modernization program and finance its anti-terrorism efforts. The Department of Justice will also be given P38.7 billion.

Duterte himself wants a “smooth transition” for the Bangsamoro Autonomous Region in Muslim Mindanao (BARMM), which will be getting P70.6 billion from the national government. A total of 63.6 billion of this accounts for the annual block grant for the region, while another P5 billion will go to its special development fund. The BARMM’s infrastructure development program will also get P17.7 billion.

Speaker Alan Peter Cayetano said the House will “work day and night” to ensure the timely passage of the 2020 budget.

He said the plenary session every Monday to Wednesday afternoon will be moved from 3 pm to 5 pm to give more time for the budget hearings, which will begin on Thursday, August 22. – Rappler.com