Aug 21, 2019 6:04 PM PHT
Rappler.com
Facebook Twitter Copy URL
Copied
The College Editors Guild of the Philippines calls on all publications to remain vigilant and continue to 'persistently uncover the true state of our society' 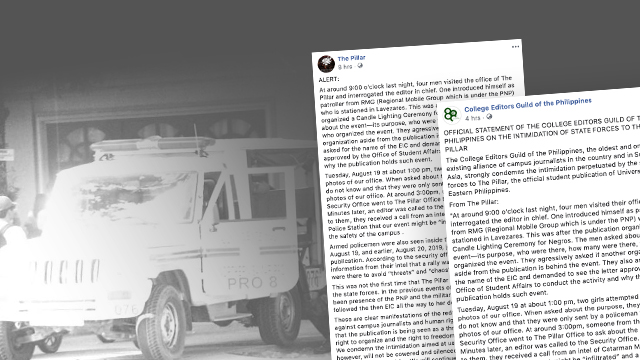 MANILA, Philippines– The College Editors Guild of the Philippines (CEGP) condemned the supposed intimidation of state forces towards The Pillar, the official student publication of University of Eastern Philippines (UEP), on Wednesday, August 21.

CEGP described the police’s reaction to the publication’s candle lighting ceremony for victims of the killings in Negros Island as an “irresponsible exercise of power to harass the practice of independent and free journalism of the campus press.”

It all started when, according to the student publication, at least 4 men – including a person who introduced himself as a patroller from the Regional Mobile Group stationed in Lavezares, Northern Samar – visited the publication’s office and interrogated the editor in chief (EIC) at around 9 pm on Tuesday, August 20.

According to The Pillar, the visiting men asked about a candle lighting ceremony organized by the student publication together with the Ibabonon Norte San Samar Artists Community as a call for justice for the victims of the killings in Negros that was held earlier that day.

Series of incidents with police

The Pillar added that the men “aggressively” asked if another organization aside the publication was behind the event, demanding to see the letter approved by the Office of Student Affairs to conduct the activity. They also asked why the publication was holding a candle lighting ceremony for Negros.

Earlier that week, The Pillar also noted that two girls had attempted to take photos of the publication’s office, claiming that they were ordered by a policeman to do so, at around 1 pm on Monday, August 19.

Two hours later, the UEP Security Office supposedly summoned the editor of The Pillar because an intel of Catarman Municipal Police Station said that the publication’s candle lighting ceremony might be “infiltrated” and posed as a “threat” to the safety of the campus.

Following that meeting, The Pillar reported that armed policemen were seen inside the campus and across the publication’s office from August 19 to 20. The UEP security office explained that the police presence in campus was a precautionary measure to avoid “threats” and chaos” after the Philippine National Police received information from their intel that a rally was going to be held at UEP.

“Interrogations and sending someone to take photos of the publication and the people in it by our policemen are manifestations that the freedom of expression and of the press are at stake,” The Pillar emphasized.

The publication asserted that these incidents are “clear manifestations of the red-tagging of state forces against campus journalists and human rights advocates.”

“There is no question as to their responsibility of making sure that peace and order be protected but a mere candle lighting ceremony is not and will never be a threat to the National Security nor it is an act which would call their attention to station within the area,” The Pillar said.

“It is alarming that the publication is being seen as a threat just for exercising the right to organize and the right to freedom of expression,” it added.

CEGP echoed The Pillar’s sentiments, reiterating “its strong position that we will never crouch down in fear. We will continue to fight and resist.”

It called on all campus publications to remain vigilant and continue to “persistently uncover the true state of our society.”

Coincidentally, the incident happened on the same day that University of the Philippines students and faculty members united in a systemwide walkout to protest against police and military intervention in schools.

The call for the systemwide walkout came after Senator Ronald “Bato” dela Rosa raised the proposal in an effort to curb recruitment and alleged kidnapping of students in leftist groups. Youth groups emphasized though that the effort might threaten academic freedom, hamper student activism, and result in massive surveillance. – Rappler.com