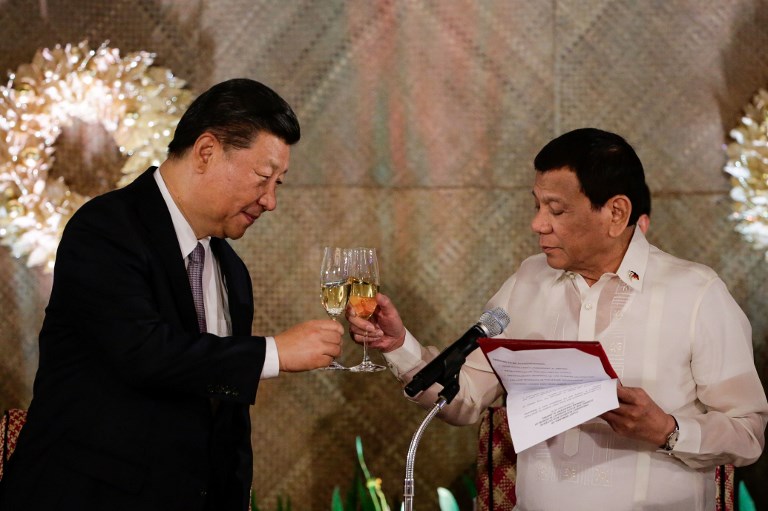 MANILA, Philippines – Much hype has been built around Philippine President Rodrigo Duterte’s declared plan to “raise” the Hague ruling  during his August 29 bilateral meeting with Chinese President Xi Jinping.

But even if he does bring up the landmark 2016 ruling, don’t expect much from China, especially if Duterte stops at mentioning the decision, say analysts.

Mentioning the Hague ruling without rallying other countries to put pressure on China will lead to nowhere. Beijing can afford to ignore it, as it has been doing since the decision was announced on July 12, 2016.

The Hague ruling struck down China’s expansive claim to the South China Sea and affirmed the Philippines’ sovereign rights to the West Philippine Sea, a portion of the South China Sea it considers its exclusive economic zone. China refuses to recognize the ruling, writing it off as “nothing more than a piece of waste paper.”

Galvanizing international support for this international court decision is the only way for Duterte to pressure China into abiding by even some parts of the ruling, said Poling.

“Beijing isn’t suddenly going to change its policies. But if this is part of a larger diplomatic effort to talk more about the ruling, seek support from the international community, and introduce a resolution about it to the UN (United Nations) and other multilateral bodies, that would be the kind of effort needed to convince Beijing over the longterm to seek a compromise,” he said.

“I do not expect China to recognize the arbitral ruling just because President Duterte will raise it during his meeting with President Xi,” said Carpio, who was part of the Philippine team that secured the Hague ruling for the Philippines, on Sunday.

We got a foretaste of Xi’s likely response to any mention of the Hague ruling last April 25, the last bilateral meeting between him and Duterte.

A source privy to that meeting told Rappler that Duterte mentioned the arbitral ruling then, to the surprise of Filipino and Chinese diplomats.

Duterte “reminded” Xi of the ruling but said he would raise it more formally another time. The Chinese, surprised that the Philippine leader deviated from the agreed-upon talking points, had to quickly type up a response for Xi. In Xi-Duterte bilateral meetings, each leader takes his turn speaking without interjection from the other. Chinese Foreign Minister Wang Yi handed Xi the quickly written response when it was his turn to speak.

The response, according to Malacañang, was a reiteration of China’s non-recognition of the Hague ruling. If Duterte again mentions the ruling on August 29, how different will Xi’s response be?

“It will be more significant if President Duterte will follow up his raising the ruling with concrete steps to fortify and enforce the ruling,” said Carpio told Rappler in a phone interview.

Steps Duterte can take include forming a “convention” with other South China Sea claimants, like Vietnam, Indonesia, Malaysia, and Brunei; sending the Philippine Coast Guard’s 10 new ships to patrol the West Philippine Sea; and encouraging freedom of navigation and overflight operations. Carpio has suggested 6 steps.

Maritime law expert Jay Batongbacal also doubts that a mere “raising” of the Hague ruling by Duterte will have a significant immediate impact on China’s behavior in the West Philippine Sea.

“China has already gained so much from the Philippines since 2016 that it can afford to not address the issue. China will literally ignore a mere ‘mention’ of the ruling,” said Batongbacal, who is director of the University of the Philippines Institute for Maritime Affairs and Law of the Sea.

Even after the ruling came out, China has continued its development of artificial islands in the Spratlys and deployment of its maritime assets even in Philippine territorial waters.

For any mention by Duterte of the Hague ruling to make a dent, Batongbacal said, it has to be the “principal part” of the meeting’s agenda, “not a mere aside.”

If Duterte doesn’t hope to change China behavior by mentioning the Hague ruling, why has he promised to do so?

Duterte mentioning the Hague ruling accomplishes one domestic political goal: fulfill his early promise to Filipinos that he would do such a thing.

In 2016, his first year as president, Duterte said he would not assert the ruling to China just yet but would do so at the “proper time” before his term ends. Shelving the ruling, which he called his “ace” card, would allow the Philippines to enjoy other perks of renewed ties with the Asian power. Duterte promised a boost in economic exchanges, higher Chinese tourism arrivals, and more loans and grants from China. (READ: [OPINION] What scares me the most about China’s new, ‘friendly’ loans and [ANALYSIS] Is Duterte selling out the Philippines to China?)

Apart from raising the arbitral ruling, Duterte claims he will call for the speedier finalization of a South China Sea code of conduct between Southeast Asian claimant states and China. He also wants to tackle the planned joint oil and gas exploration.

The intergovernmental committee and working group created by the terms of reference and memorandum of understanding signed in November 2018 may be announced during Duterte’s trip. – Rappler.com