Aug 29, 2019 4:25 PM PHT
Rappler.com
Facebook Twitter Copy URL
Copied
(UPDATED) Evangelista is lauded for producing 'the most difficult and even the most unpopular stories' 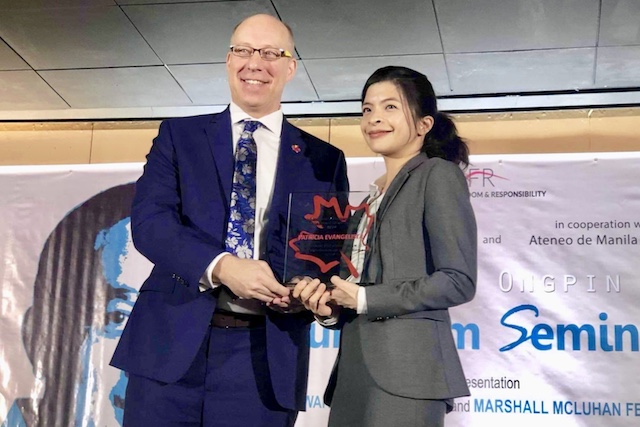 The Marshall McLuhan Award is presented annually by the Center for Media Freedom and Responsibility and the Canadian Embassy in the Philippines to a Filipino journalist who has exhibited excellent work in the preceding year.

Evangelista was lauded by the Canadian embassy for producing “the most difficult and even the most unpopular stories.”

In her Impunity Series, Evangelista unveiled how drug suspects were summarily executed by vigilantes, which, in some cases, were identified by the families of the victims as cops. Her investigation continued with the Murder in Manila series, where she found strong indications that the killings of drug suspects were outsourced by local police to vigilantes.

The award was presented during the 2019 Jaime V. Ongpin Journalism Seminar (JVOJS), which gathered 7 journalists “chosen on the basis of the quality of their reports in print, television and online.”

In presenting the award, Warren Mucci, the Canadian embassy’s political and public affairs counsellor, cited Evangelista’s professional qualities: “an inspiring motivation to communicate the issues of the day, an admirable creativity in adapting to the evolving platforms of the industry, and the indomitable courage to write and produce the most difficult and even the most unpopular stories.”

He also lauded Ms. Evangelista’s “passion for the craft (that) transcends various media platforms, and whose skillful proficiency brings the voices of some of the most marginalized to the mainstream.”

The panelists in this year’s JVOJS were:

Esguerra earned praise for his explanatory journalism as a writer for ABS-CBN online and as the host of ABS-CBN News Channel’s Early Edition.

During the panel discussion, the journalists lamented the deterioration of press freedom and discourse under the Duterte administration, notably how it had restricted the access of critical journalists and how it had become submissive to China in its claim over the West Philippine Sea.

The journalists also noted attacks against journalists, both online and offline, as threats to press freedom.