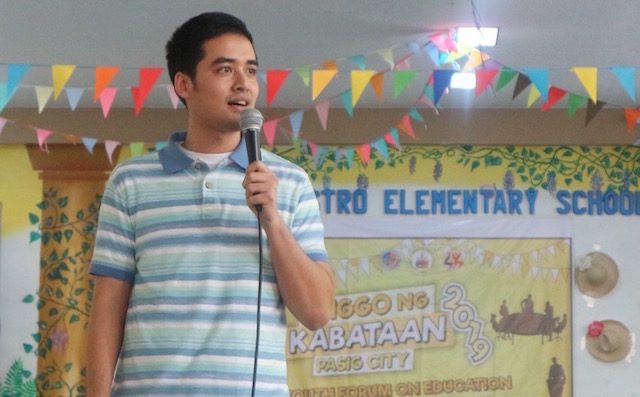 MANILA, Philippines – Vico Sotto went from youngest city councilor in Pasig to youngest mayor in Metro Manila in just 3 years. While that was quite a feat, his political opponents swooped in on his short resumé. That at 30 years old, he toppled city hall’s old guard has had many people excited over what he could do, but it also had some skeptics doubting whether he really could undo decades of patronage politics and corruption in the bureaucracy.

It goes against traditional Filipino culture to act sternly toward one’s seniors, but that’s what Sotto has done so far, warning and calling out people who are older or have been in the bureaucracy longer than him, and he’s done it unapologetically.

As Sotto capped off Linggo ng Kabataan or Youth Week in Pasig City on Saturday, August 31, he urged hundreds of high school and college students to be just as audacious.

(I believe in the capacity of the youth. I believe in your capacity…. Let’s not limit ourselves and even now, let’s get involved with the work of our government. Let’s participate in planning, making programs and projects. Let’s not just leave everything to those seated at city hall.)

He does, of course, occupy the top seat at city hall, so he backed his call with a promise.

(My part as mayor is to open up city hall, open up our local school board, open up our decision-making process so that every group, every citizen of Pasig can take part and be heard.)

Not all the answers

The YSpeak Youth Debate spearheaded by the Sangguniang Kabataan was a “new initiative” not typically part of local government offerings, said guest judge Bolo Pascual, a varsity debater who was Philippine Debate Open Champion in 2015.

The debate topics included whether social media does more harm than good, whether the suspension of Pasig City’s odd-even traffic scheme deserved support, and whether high-ranking government officials should hold at least a college bachelor’s degree.

“I was impressed to see public schoolers who were new to debating be very articulate about these interesting subjects,” Pascual told Rappler, adding that the format, which allowed the competitors to speak in both English and Filipino, was innovative and helpful.

“It promotes discourse, something the debate community could explore as a possible trend,” Pascual said.

Pascual, a 24-year-old law student from the University of Santo Tomas, said promoting debate among the youth is important because “people will be disagreeing no matter what, but we’d like to see the next generation elevate the discourse, and to disagree with respect, decency, logic and understanding.”

Sotto delivered a speech to open the final round on Friday, August 30, and told the contestants that even if he is their mayor, he “does not have all the answers,” and so he encourages young people like them to speak up because what they have to say is important.

For Pascual, Sotto making time for this youth activity brought home the point: “It delivered a message that this was something important, that debate, public speaking, and developing the youth is of importance to the city.”

The students who attended the Linggo ng Kabataan cap-off at De Castro Elementary School felt the same way. The campus is tucked away in a crowded residential area, and they appreciated the mayor braving the heavy traffic along Ortigas Avenue on a rainy Saturday afternoon to give them a few words and pore over their thoughts on education and governance scribbled on sheets of Manila paper.

“It’s our first time to have our mayor listen to what we need to say, what we rant about the education system here in Pasig City,” said Keil Custillas, who’s on her second year taking up Education at the Pamantasan ng Lungsod ng Pasig.

Her classmate, Mira Ontoy, added, “Mahalaga ang simpatya at opinyon ng taong bayan dahil sa dulo, kami, tayo ang maaapektuhan (The people’s sympathy and opinion are important because in the end, we are the ones affected).”

The city government under Sotto wants the students themselves to point out problems and suggest policies to solve them, and Ontoy said she is all for it.

Often, Sotto could not stay at an event for very long. He arrives, delivers his speech, observes what goes on, then quietly exits. There’s always that next appointment on the list.

Although the mayor could not stick around at the cap-off event long enough to watch all the students’ groups present their ideas before the gathering, they appreciated having been urged to speak up, and they were eager to take him up on that offer to get involved with running the city, or at least their schools.

Corazon Raymundo, the Pasig City Councilor who leads the education and the gender and development committees, stayed throughout the event.

Tasked with implementing whatever plans would develop from this “assessment” of the city’s school system, Raymundo told Rappler that many things needed to be changed or improved. Top of mind was to do away with the “double shift” in public schools.

Because there are way more students than classrooms, classes are held in two, even three, shifts in a day. This means students are out either at dawn for the morning shift or after dark for the afternoon or evening shifts.

The city also plans to address the growing number of teenage pregnancies through a “comprehensive sexuality education” for high schoolers.

(With teen pregnancies, of course, the child’s future gets curtailed. They not only stop studying, but there’s also stigma from the community.)

Sotto has promised to expand the city’s scholarship and sports programs for the youth, on top of the many other reforms he has vowed to push for.

Throughout the week, despite it having been Youth Week, the mayor still had tricycle tussles to untangle, neighborhood troubles to resolve, inaugural ribbons to cut, and command conferences to lead.

Technically, it was Sotto’s last Linggo ng Kabataan as a member of the “youth,” as the law states that only officials 30 years old or younger may qualify as youth sector representatives.

He took note of that, saying on his official Facebook page that the recent Linggo ng Kabataan was special to him. As he moves on to full-fledged adulthood, he lets the young speak for the young.

“I’m excited to learn more about their inputs after the forum.” – Rappler.com