Sep 4, 2019 2:18 PM PHT
Lian Buan
Facebook Twitter Copy URL
Copied
'(The ruling) did not resolve anything about same sex marriage, the opinions expressed there will not be controlling,' says Chief Justice Lucas Bersamin 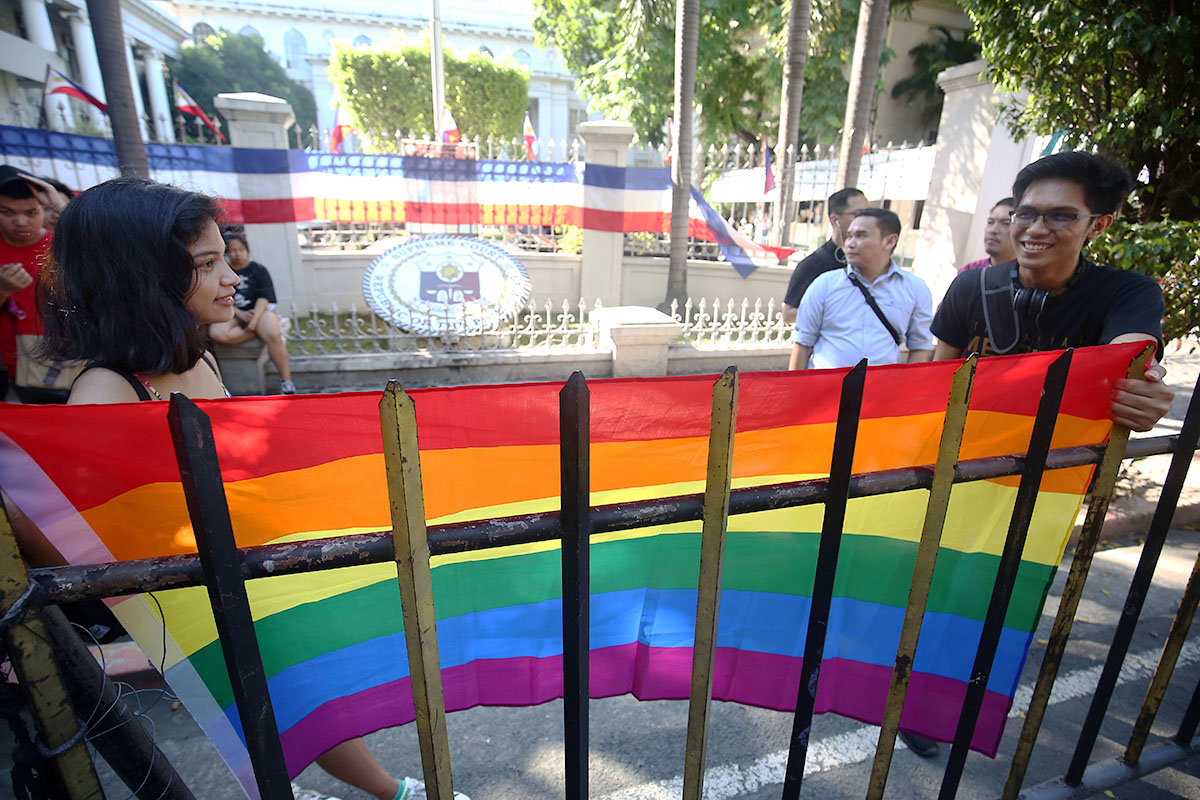 MANILA, Philippines – The fight for same-sex marriage in the Philippines is still very much alive despite the recent Supreme Court ruling that unanimously dismissed a petition based on technical grounds – lack of a legal standing and violation of hierarchy of courts.

“We just voted to dismiss the case because there is no case,” Chief Justice Lucas Bersamin told reporters on Wednesday, September 4, saying that petitioner Jesus Falcis could not sue the Civil Registrar General for denying marriage licenses to members of the LGBTQ+ community if he himself had not applied for a marriage license yet.

It was Falcis’ theory that the provisions in the Family Code that limit a marriage to a man and woman only, and which is the basis of the Civil Registrar General in approving marriage licenses to straight couples only, already harm him as a gay man even though he has not applied for marriage yet.

The petition argued that those provisions in the Family Code violate the constitutional guarantee of equal protection.

The pronouncement of the ruling, penned by Associate Justice Marvic Leonen, would also provide an opening for marriage equality as it said the Constitution does not explicitly ban same-sex marriage.

“From its plain text, the Constitution does not define, or restrict, marriage on the basis of sex, gender, sexual orientation, or gender identity or expression,” said the ruling, as quoted by SC Spokesperson Brian Keith Hosaka.

It is not clear yet whether the rest of the justices agreed with Leonen’s pronouncement, or if their concurring votes were only for the dismissal of the petition based on the technical grounds.

Interpellations during oral arguments indicated that some of the justices were not inclined to allow same-sex marriage.

But as Bersamin said, whatever the opinions are of the justices in the Falcis decision would not be “controlling.”

“That case did not resolve anything about same sex marriage, the opinions expressed there will not be controlling, wala pa kaming matatawag na precedent (we can’t call any as a precedent),” Bersamin said.

The Family Code was passed in 1987, but Bersamin said that would not stop the Supreme Court from reviewing the constitutionality of those provisions.

“Basta labag sa Constitution, kahit kasing tanda ni Adan ‘yung batas,” said Bersamin. (As long as it violates the Constitution, it won’t matter even if it’s as old as Adam.)

Leonen’s ruling nudged same-sex marriage advocates that “official recognition of their partnerships, for now, be a matter that should be addressed to Congress.”

Leonen also has advice for those who plan to file similar petitions in the future: “Often public reason needs to be first shaped through the crucible of campaigns and advocacies within our political forums before it is sharpened for judicial fiat.”

Falcis and his co-counsels were held liable for indirect contempt for violating hierarchy of courts and for bringing a case without a justiciable controversy.

“Good intentions are no substitute for deliberate, conscious and responsible action. Litigation for the public interest for those who have been marginalized and oppressed deserve much more than the way that it has been handled in this case,” the ruling said.

In a statement, Falcis said the ruling was a “temporary setback.”

“This is a temporary setback. In other countries from the US to Australia to Taiwan, they had to lose before they won marriage equality. The Philippines will be no different,” Falcis said.

The Supreme Court is yet to release a copy of the decision which was voted on only on Tuesday, September 3. – Rappler.com