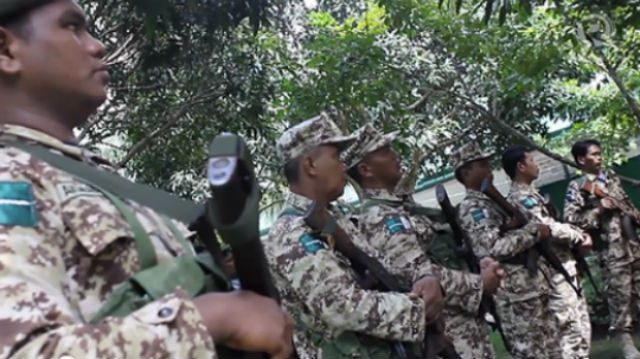 This second phase of the MILF’s normalization process began on August 26 with the decommissioning of 30 of its combatants who were so advanced in age that the facilitators from the foreign-led Independent Decommissioning Body (IDB) and the Office of the Presidential Adviser on Peace, Reconciliation, and Unity (OPAPRU) realized the need for wheelchairs.

Now in their twilight, these former rebels have spent much of their lives fighting the government for self-determination as the Moro people, fortunate not to have been killed in the armed conflict that began in the 1970s.

BIAF soldiers will be decommissioned in batches, including 1,060 on Saturday itself, until the 12,000 requirement is fulfilled by early 2020, after which the third phase of the process is expected to begin.

On top of other forms of aid from the government, each decommissioned former rebel will receive P100,000 in cash and livelihood assistance, while their families will get P500,000 to P1,000,000 in housing, scholarships, healthcare aid. Such help is to set them on the path to normal, post-conflict lives, Chief Peace Adviser Carlito Galvez Jr told reporters earlier this week.

The first phase of the MILF’s decommissioning happened in June 2015, when 145 of its soldiers laid down their arms, symbolized by 75 firearms handed over to the IDB.

In May 2017, the Islamic State or ISIS-linked Maute Group laid siege to Marawi City in Lanao del Sur. More than 1,000 people were killed in 5 months of fighting, of which around 900 were terrorists, according to the Armed Forces of the Philippines (AFP).

Last June, an attack on an Army camp in Indanan, Sulu, by two suicide bombers – one a Filipino – marked an escalation in terror tactics by local insurgents. The AFP afterwards reported the presence in Sulu of foreign terrorists with links to ISIS, suspected to be working with the ASG.

Meanwhile, MNLF leader Nur Misuari has been pressing the government to deliver on unfulfilled items on the government’s 1996 Peace Agreement with the MNLF.

As the government sorts this out with the MNLF, Galvez said the group might be enlisted to help fight the ASG in Sulu, which is the MNLF’s turf. – Rappler.com