Sep 7, 2019 10:36 PM PHT
JC Gotinga
Facebook Twitter Copy URL
Copied
Having been at war for much of their lives, the former Moro rebels face insecurity and uncertainty as they return to civilian life 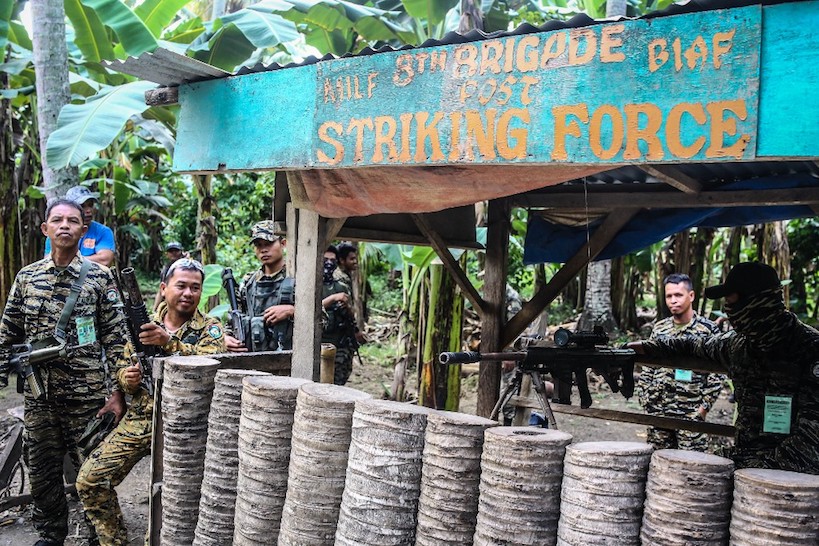 MANILA, Philippines – The war is over, and although the thousands of Moro rebels who fought the government for decades have long waited for this day, now that it has arrived, they are somewhat anxious.

When President Rodrigo Duterte arrived at the Old Capitol in Sultan Kudarat, Maguindanao, what welcomed him were rows upon rows of weapons: automatic rifles, grenade launchers, and rocket launchers, all lying cold on silken sheets for display.

Ebrahim has dropped the name he’s been known as – Murad, his nom de guerre.

This is MILF’s biggest part of the “bargain” with the government, as Ebrahim himself put it: the decommissioning, or disarmament, of its 40,000-strong Bangsamoro Islamic Armed Forces (BIAF).

Duterte led the ceremony on Saturday, September 7, to officialize the second phase of the MILF’s decommissioning, which will see 12,000 of its soldiers disarmed by early 2020, or 30% of its troops, the MILF’s answer to the ratification of the Bangsamoro Organic Law (BOL) that created the BARMM last January.

“The 1,060 combatants who are to be decommissioned today here in this place are not ordinary individuals. They are 1,060 individuals whose lives were drastically affected. These are 1,060 stories of love, faith, and sacrifice for the sake of Allah and for the sake of the aspirations of every Bangsamoro,” Ebrahim said as he presented the combatants to the President.

“This new chapter can be quite challenging for our comrades. For many years, our training has been grounded on the armed struggle. But now, our brave combatants will face a significantly different form of struggle to transform to civilian lives and embrace a new mindset,” Ebrahim went on.

Duterte picked up on this sentiment among the former rebels arrayed before him in the cavernous hall of the Old Capitol.

(Do not be sad that you turned over your arms to the government because you are now of the government. If you really need arms to defend your government here in BARMM, no problem. I will give you newer ones.)

(Do not be disheartened that you surrendered arms. This government is yours. We’ve given it to you.)

(Then if you want to improve the mechanized farming, you do have capital, do not buy weapons…. Use the money for livelihood so that you and your family can live. Because no one will fight you anymore.)

Ebrahim thanked Duterte profusely, crediting him with the “strong will” to the deliver, at last, their expanded autonomy, although Duterte only prioritized the BOL, on which the BARMM’s creation hinged, after the grisly siege of Marawi City in 2017 by the pro-Islamic State Maute terror group – more than a year into his term.

The initial phase of the disarmament happened in 2015 with the decommissioning of 145 BIAF soldiers and 75 weapons, following the signing of the Comprehensive Agreement on the Bangsamoro in 2014 under President Benigno Aquino III.

During Saturday’s ceremony, Ebrahim addressed his comrades in the Moro struggle who were about to learn what it means to live in peace.

“The cause will live on in each and every single one of you. Our time in the battlefield is over. But to our youth, it is now your time to face the battle of achieving greatness from the things that you are passionate for,” the former rebel leader said.

“And out of the opportunities that the sacrifices of your elders have created for you, these fruits are what our forefathers would have wanted to see: a community flourishing, a ‘bangsa’ that is thriving, and a peaceful region existing.” – Rappler.com