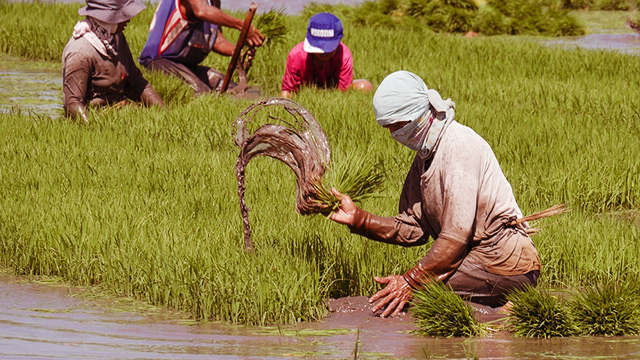 MANILA, Philippines – Speaker Alan Peter Cayetano said the House of Representatives is likely to realign at least P2 billion under the proposed P4.1-trillion budget so the Department of Agriculture (DA) can buy more palay stocks from rice farmers.

The Speaker said augmenting the DA’s proposed budget is one of the two budget realignments lawmakers are eyeing to make as the 2020 budget is brought before the House plenary for further deliberations and amendments starting Tuesday afternoon, September 10.

(The DA only has P7 billion for this program, so we definitely want to increase it to an amount not lower than P9 billion. But we’re looking for much more…. We’re still getting data from the DA. But based on our initial hearing, P7 billion is really too little.)

Small farmers affected by the rice tariffication law have been given the option to avail of zero-interest loans, instead of the government providing them with conditional cash transfers. (READ: What you can do to help Filipino rice farmers)

President Rodrigo Duterte has already instructed the DA to buy all locally harvested palay to help ease the plight of Filipino rice farmers, according to a Philippine Star report.

The rice farmers, however, will not be able to immediately benefit from the additional DA funds, as the 2020 budget – if passed by Congress on time – can only be used by the government starting January 1, 2020.

Aside from increasing the DA budget, Cayetano said legislators are also seeking to create a Camp Development Fund, where every police and military camp nationwide would get money to modernize their facilities.

“Ang focus ng ating Pangulo is on security. And makikita ‘nyo parating naghahagilap ng pondo ang PNP (Philippine National Police) at AFP (Armed Forces of the Philippines) kung paano ayusin ‘yung mga camp. So in the same manner that we have a school building program, we want to put [up] a Camp Development Fund,” said the Taguig City-Pateros representative.

(Our President is focused on security. And you can see how the PNP and the AFP are always looking for funds to improve their camps. So in the same manner that we have a school building program, we want to put up a Camp Development Fund.)

Cayetano said they are initially eyeing to allocate P500 million to every police and military camp, but the figure may still increase.

There are police camps in most provinces and cities in the country. There are also military camps in every region.

The proposed 2020 budget shows Duterte is once again prioritizing peace and national security programs. A total of P184.8 billion is allocated for the PNP, while the Department of National Defense will get P189 billion to fund its modernization program and finance its anti-terrorism efforts.

In January 2018, Duterte also signed a joint resolution increasing the base pay of the military and the police. – Rappler.com