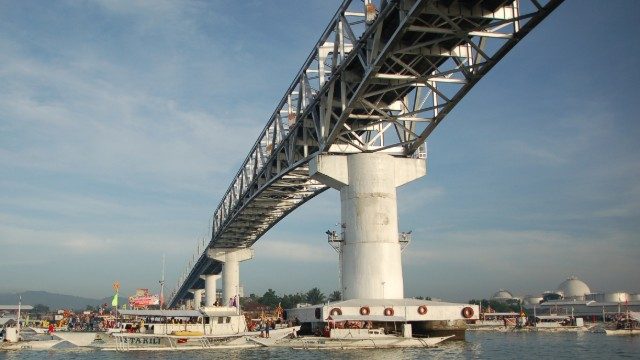 Traffic and monitoring analyst Leo Bacus said that while “the bridge is monitored 24/7, there are blind spots not covered.”

The board is comprised of regional heads of various agencies and local government units (LGUs) managing the bridge, including the Department of Public Works and Highways, the Philippine Coast Guard, and the Philippine National Police among others.

Cebu Governor Gwendolyn Garcia, chairperson of the MCBMB, grilled Bacus as to why the monitoring team was not able to save an Ateneo de Cebu student who was found dead in the Mactan Channel on August 17.

Bacus showed the student walked to a blind spot at around 2 am and that’s why he was not spotted by the monitoring team.

“Wala’y nag monitor (no one monitored)? Why don’t we have upgrading or number of cameras?” Garcia asked.

Garcia also proposed upgrading to artificial intelligence technology, increasing the height of the railings, banning pedestrians at certain hours and completely banning cyclists from the bridge, among others.

“Let’s not make it too easy to climb over so there is time to respond,” she said.

According to Bacus’ data, the monitoring team was able to prevent 17 suicide attempts, while 3 others survived their attempts and 4 have died.

“We were able to prevent more suicides because of the added police presence,” Bacus said.

Previously, the board also discussed adding nets to the bridge to prevent attempts. – Rappler.com