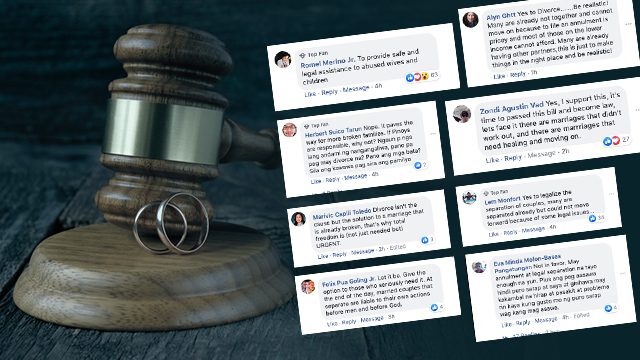 Facebook Twitter Copy URL
Copied
As the Senate continues to hear 3 divorce bills, Filipinos online weigh in on legalizing divorce in the country

As the Senate continued to hear 3 divorce bills on Tuesday, September 17, Filipinos online weighed in on legalizing divorce in the country.

The following are the names of the divorce bills:

The controversial absolute divorce bills, filed by Senators Risa Hontiveros and Pia Cayateno, seek to go beyond psychological incapacity, lack of consent, incapability to bear children, among others, as acceptable reasons for an annulment.

Besides Vatican City, the Philippines is the only nation in the world that does not have a divorce law. (READ: [OPINION | Dash of SAS] The Divorce Bill: Legislating love, sex and marriage)

At the hearing, Hontiveros said that Filipinos, especially women and children, “should be free from abusive and loveless relationships” to be given another chance in life. (READ: Hontiveros: Divorce bill is ‘pro-family, pro-children‘)

In March 2018, a Social Weather Station survey found that majority of Filipinos support legalizing divorce in the country. Does this still hold true today?

On Tuesday, Rappler ran a conversation on legalizing divorce in the country, and netizens seemed to have clashing opinions about it.

For Joy Marcial, legalizing divorce would give someone who’s trapped in an abusive and unhealthy relationship a chance to start a new life.

“If you don’t believe in it and don’t want to get a divorce, then don’t get one. But don’t deprive others of the chance to start over and turn a new leaf after enduring years trapped in a bad marriage,” wrote Marcial.

The same sentiment was echoed by Roena Cameron, saying that many women are still suffering from trauma because of an abusive relationship. She then recounted her traumatic experience with her husband that eventuallly affected their children.

Netizen Marie Shuck appealed to those who oppose the bill to stop citing Bible verses to defend their stand and instead try to look at it from the lens of women who were abused by their husbands.

Religious groups and supporters see the measure as evil, “anti-family,” and detrimental to the children. The Bible, after all, says what God united let no man tear apart. (READ: [OPINION] Divorce and the religious response)

For Raymond Braganza, legalizing divorce is not the best solution for broken marriages. Acccording to him, lawmakers should amend existing laws on marriages, like raising the age requirement for someone to get married.

Meanwhile, for Sari Han, if the divorce bill becomes a law, couples would take advantage of it.

Eva Minda Molon-Basas Pangatungan said that the Philippines has annulment and legal separation, and those should be enough.

Senator Joel Villanueva said he will “definitely oppose” the divorce bill when it reaches the plenary. He said he supports “equal access” to annulment, which he branded “anti-poor.” (READ: Divorce bill? Villanueva says ‘over my dead body)

Read what other netizens had say about the issue:

President Rodrigo Duterte had earlier expressed his opposition on legalizing divorce because it would negatively affect the children of the couple. (READ: Duterte against divorce – Malacañang)

How about you? Are you in favor of legalizing divorce in the Philippines? Why or why not? – Rappler.com