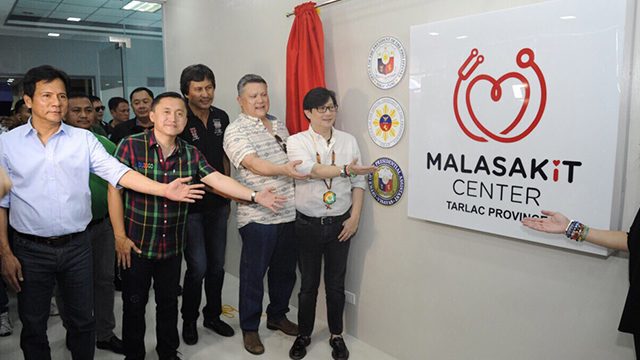 Facebook Twitter Copy URL
Copied
Senator Bong Go, who had been accused of using Malasakit Centers to promote his candidacy, is pushing for the passage of the same bill in the Senate

MANILA, Philippines – The House committee on health approved a bill that would mandate the government to establish and give annual funds to Malasakit Centers in public hospitals nationwide.

The bill will now be endorsed to the House plenary for its approval on 2nd reading.

Through the bill, a Malasakit program would be formally included in the programs of the Department of Health (DOH) to “complement” the universal health care program.

All DOH-run public hospitals would be required to put up Malasakit Centers, which would serve as a one-stop shop so indigent patients would be able to access medical and financial aid from the DOH, Department of Social Welfare and Development (DSWD), Philippine Charity Sweepstakes Office (PCSO), and Office of the President in one place.

Other public hospitals that are not being operated by the DOH may also put up their own Malasakit Centers, provided that:

“The Malasakit Centers shall be non-partisan, convenient, free of charge, accessible, and shall have a standard system of availment of assistance,” states the bill.

The bill would also require the DOH, the DSWD, and the PCSO to allocate the necessary funds for the Malasakit Centers under their proposed budgets in the annual national budget.

The Malasakit Centers are a pet project of Senator Bong Go, who was the longtime aide of President Rodrigo Duterte before he ran and won in the May 2019 polls. The centers are currently part of the Individual Medical Assistance Program, which received P8.68 billion in 2018 from the PCSO’s net charity fund.

The Commission on Elections later ordered the DOH to take down these posters after citizens complained that government funds were being used to promote Go’s senatorial candidacy. (READ: [EDITORIAL] #AnimatED: Bantay-salakay ng Malasakit Center?)

Go is now pushing for the passage of the same bill in the Senate.

He recently got into a word war with Albay 1st District Representative Edcel Lagman, an opposition lawmaker who believes the Malasakit Centers are being used as a “partisan tool.”

Go dedicated a good chunk of his first privilege speech as senator fuming at Lagman and ridiculing the veteran congressman’s looks.

Lagman then said Go was being “ballistic.” The congressman pointed out that he did not even mention the senator’s name when he had criticized the Malasakit Centers during the PCSO’s budget hearing. – Rappler.com