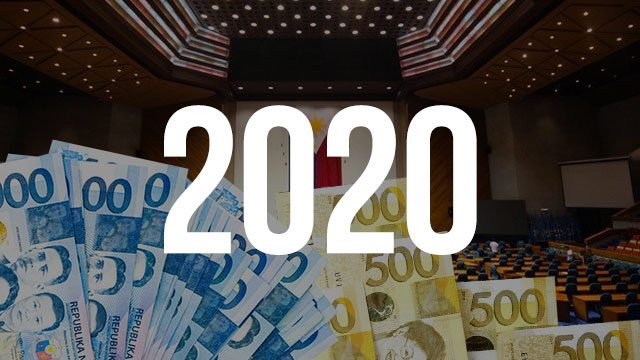 MANILA, Philippines (UPDATED) – After President Rodrigo Duterte certified as urgent the proposed P4.1-trillion budget for 2020, the House of Representatives now has the authority to fast-track its approval by Friday, September 20.

House committee on appropriations chairperson Isidro Ungab said it is “possible” for the lower chamber to approve the 2020 General Appropriations Bill (GAB) on 2nd and 3rd readings on the same day.

“Given the said certification, the P4.1-trillion budget for 2020 may be passed on the same day without waiting for separate days to have it approved on 2nd and 3rd readings. Thus, it is possible that the GAB will be passed this Friday, since it was already certified as urgent,” Ungab told Rappler.

“The need to pass the budget on time is of immense importance in helping boost the economy, that is why we thank President Duterte for certifying the budget as an urgent measure,” he added.

This would be much earlier than the House’s initial target to pass the 2020 budget before the 18th Congress takes a break in October.

The House rules states that there should be at least 3 days between the 2nd and 3rd reading approval of bills, to give time for congressmen to read the provisions before they give their final thumbs-up.

But this 3-day notice rule is disregarded whenever the President certifies a bill as urgent. Duterte gave this certification to the 2020 GAB on Wednesday, September 18.

Alliance of Concerned Teachers France Castro of the minority bloc then asked what are the implications of the President’s letter on the ongoing plenary debates on the 2020 budget as well as the amendments that legislators intend to make to the GAB.

“Madam Speaker, I was informed by the House leadership that similar to what has occurred in 2015, we are going to have the approval on 2nd and 3rd readings of House Bill 4228 tomorrow after we create a small committee, formed by the majority and the minority, to accept amendments to our House bill,” said Bondoc.

He said the House leadership gave the assurance that all amendments will be “judiciously considered.”

Ungab’s statement comes a day after it was revealed by House committee on appropriations vice chairperson Joey Salceda that congressmen will each receive P100 million in the 2020 budget to allot for their pet projects.

Ungab, however, remained silent on the matter when sought for comment by Rappler.

What about the amendments? If the 2020 budget is approved by the House on Friday, this would mean the crucial period of amendments would be rushed. It is the period wherein legislators can file and object to motions to realign funds to either increase or decrease a specific agency’s budget.

Ungab said the House can form a small committee, which would be tasked to “review” all amendments that would be submitted by individual legislators.

The appropriations panel chair said this is “consistent with parliamentary precedents.”

A small House committee was previously formed for the 2019 budget to scrutinize every line item to ensure budget allocations were truly necessary for certain departments. But this small committee was able to finish its assessment before the delayed 2019 budget was passed by the previous 17th Congress in February.

While Ungab merely said the earlier passage of the 2020 budget was just a possibility, House committee on appropriations vice chairperson Salceda said he was “sure” the House would pass the budget by Friday.

“So the 2020 budget, I’m sure will be approved by September 20. The earliest approved budget at the House in history,” Salceda said in a press conference in Malacañang on Wednesday.

The House is holding plenary debates on the proposed budgets of every government agency. The deliberations are scheduled to be completed by Friday as well. – Rappler.com