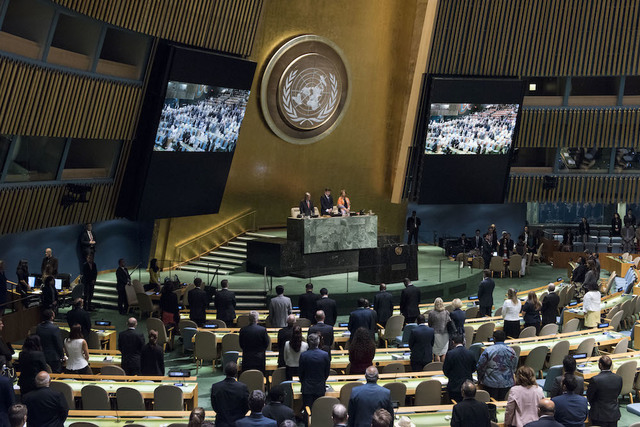 MANILA, Philippines – Former foreign secretary Albert del Rosario on Friday, September 20, refuted the Duterte government’s claim that it would be “futile” for the Philippines to bring up at the United Nations the Hague ruling which asserted the country’s rights in the West Philippine Sea.

Del Rosario told the Duterte administration that the UN serves as both the “primary promoter” of the rule of law and “the court of world public opinion.”

For Del Rosario, this means that the UN General Assembly would be the proper venue for raising the arbitral ruling since leaders of the world will be present and listening.

“Leaders of 193 countries troop to the UN each year to promote their positions before the global community of nations…. Seeking a resolution can only be pursued after the proper foundation has been developed,” Del Rosario said in a statement.

“It would take time and hard work but it can be done,” he added.

Malacañang disagrees: Del Rosario’s statement comes after Presidential Spokesperson Salvador Panelo rejected his proposal to raise the ruling before the international body, claiming the UN has no power to compel China to follow it.

In efforts to back this, Panelo also falsely claimed “nothing happened” to Nicaragua’s efforts to seek a UN resolution calling on the United States to abide by an International Court of Justice ruling that favored Nicaragua in 1986.

Del Rosario corrected this. Nicaragua’s efforts, he said, gained it favorable global opinion and though the US first defied the UN resolutions, it ultimately provided Nicaragua a substantial aid package of some $500 million.

Aside from Del Rosario, experts on the West Philippine Sea and South China Sea dispute, such as Philippines’ lead counsel against China Paul Reichler, have suggested a similar approach. Supreme Court Senior Associate Justice Antonio Carpio also said the Philippines can work with many countries such as those in Southeast Asia to assert the country’s rights in the maritime area.

Locsin earlier doubted the effectiveness of bringing up the arbitral ruling, saying the Philippines would be outnumbered by countries grateful to China for its development aid.

“While we agree with SFA (Secretary of Foreign Affairs) Locsin that many developing countries are beholden to China because of economic largesse, the inherent desire for the rule of law to prevail is the balancing factor,” Del Rosario said.

Del Rosario said he had “every confidence” in Locsin and the Department of Foreign Affairs “to ably undertake what is required in moving forward our case on the arbitral tribunal outcome.”

Del Rosario earlier warned the Philippines should adopt a “multilateral approach” to asserting its rights in the West Philippine Sea before “we get shoved around any further leading to irreversible consequences.”

Despite suggestions of experts, the Duterte government has preferred to continue its bilateral approach with China on the West Philippine Sea issue. This has failed to stop Chinese aggression in the maritime area. (LIST: China’s incursions in Philippine waters) – Rappler.com