Sep 20, 2019 8:47 PM PHT
JC Gotinga
Facebook Twitter Copy URL
Copied
The city government invests in body cameras for its traffic enforcers to make sure they'll do their job, and that motorists will let them 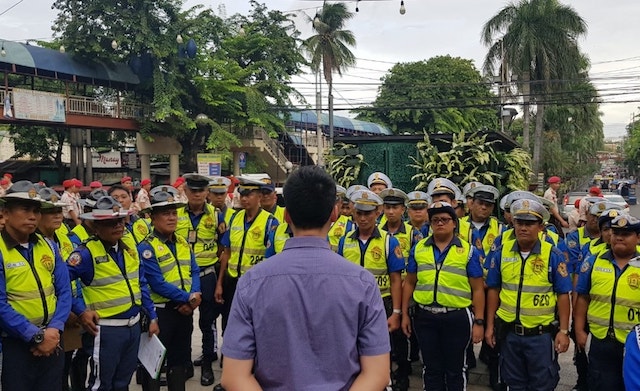 MANILA, Philippines – It’s not always just their fault that apprehensions on the road end up with cash changing hands, Pasig City’s traffic enforcers reasoned out when Mayor Vico Sotto scored their ranks for the “notorious” reputation they’ve earned for petty corruption.

When caught with a violation, motorists tend – or like – to assume the enforcer who flagged them is just out to make some money for merienda, and candidly slip them a few hundred pesos to wiggle out of the hassle of getting a ticket.

And if that doesn’t work, if the enforcer insists on enforcing the law, it’s common for the violator to flash some influential person’s business card, or “calling card” in Filipino parlance, to scare the enforcer into letting it slide.

When the city government issued 190 body cameras – “bodycams” – to enforcers from its Traffic and Parking Management Office (TPMO) on Thursday, September 19, it was a two-pronged tactic.

One purpose, of course, is to make the enforcers think twice before taking bribes or misbehaving when they apprehend erring motorists.

But the other reason for the bodycams is to keep an eye on the violators, too.

“I also assured [the enforcers] that if they are doing the right thing, I will protect them,” Sotto said in a post on his official Facebook page.

Known for their distinct uniforms, the “Blue Boys and Girls” of Pasig’s TPMO are a pretty beat-up bunch, although of course their notoriety is backed by many social media videos of their indiscretions on the road.

They are paid the minimum wage for 5 days of work each week and before Sotto became mayor, they were made to work a 6th day without pay. Their meager benefits were usually delayed. They were hired on temporary contracts and could lose their job at city hall’s whim.

They felt as though they were the “lowest mammals” in Pasig, one of them said during a training seminar that city hall started offering them in August.

Traffic is almost always bad, motorists are impatient, and enforcers are the easiest targets of the city’s frustration, since they’re the ones always right in the middle of a chokepoint.

That, of course, does not justify fleecing motorists. But the upright still outnumber the crooked, Sotto said, so he decided to give them a chance to prove themselves.

Although the Blue Boys and Girls were the first to feel the new city administration’s crackdown on corruption – several of them have been fired and sued for extortion or taking bribes – they were also the first to be given an opportunity to secure their tenure.

Those who complete the training program and maintain a spotless record will be up for regularization within a year, Sotto promised them.

Although making them wear bodycams while on duty is meant to keep them in line, it’s also to embolden them to actually do their job.

Pasig has 641 Blue Boys and Girls, so the city government will provide more bodycams, Sotto said.

“Tuloy-tuloy din ang training at retraining ng mga enforcer, at pagsasampa ng kaso sa mga nahuhuling tiwali,” Sotto added. (The enforcers’ training and retraining continue, and so does the filing of cases against the corrupt.)

As a city on the edge of the metropolis, Pasig is where the cosmopolitan meets the rustic. A major thoroughfare like Ortigas Avenue cuts past skyscrapers, two rivers, a myriad of subdivisions, then ends at the foothills of the Sierra Madre in Antipolo.

On the city’s eastern flanks are tight-knit villages on the border with Rizal province.

A deadline to fix the city’s – and the metropolis’ – traffic problem looms over Metro Manila’s local governments, and in Pasig’s case, the trouble is not just roadblocks but, in some cases, the absence of proper roads.

For instance, before motorists from the suburbs can get to the relatively broad avenues of Ortigas Center, they must first negotiate the streets and alleys of Kapasigan, the old town.

Even worse, some villages on the very edge of the city have roads that are either unpaved or in disrepair.

Sotto visited the neigborhood of Nagpayong in Barangay Pinagbuhatan, where land issues held back the reconstruction of Kenenth Avenue.

The mayor said they are now “making real progress,” and that the road should be finished in 2020.

Another project is the Tambakan (Dumpsite) area of Barangay San Miguel. As its unsavory name suggests, the place is covered in muck.

Sotto said a road is now being paved and a drainage, dug, so that children wouldn’t have to wear boots when walking to school.

Two weeks ago, Sotto announced a revamp of the city’s scholarship program, shifting from a “points system” to a “social contract” approach.

Basically, scholars will no longer be required to work for their tuition by earning points when they attend government programs, but through more flexible “community service” that will take up less of the students’ time, Sotto said.

This week, Sotto said 2,653 college-level scholars will receive cash allowances from the city government. That’s 553 more than the initial 2,100 that made the cut.

“Nagawan natin ng paraan.” (We were able to find a way.)

They’re qualified anyway, Sotto said, adding that new guidelines will be in place for the next batch of scholars with simpler requirements and more subsidy to ease their financial burden.

The city government is looking at improving the public school system by getting students more involved in crafting policies.

Earlier this month, the mayor said he would deflate city government project contracts by at least 10% by weeding out corruption in the bidding process.

The money that will be saved from pilferage, he said, will go to scholarships and medicines for senior citizens. – Rappler.com