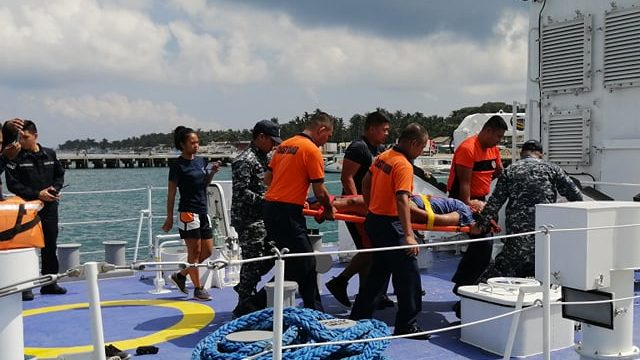 AKLAN, Philippines – Family and friends mourned the loss of 31-year-old Mark Vincent Navarrete, one of the 7 confirmed casualties in a drowning incident in Boracay Island on Wednesday, September 25

Navarrete died shortly after he was rushed to Malay Municipal Hospital in Barangay Motag in mainland Malay.

(We will bring him to Libacao, Aklan, for his wake. He’s a good son. We’ve already accepted what’s happened, no one wanted this.)

Navarrete’s body was transported to a local funeral home in Kalibo, Aklan, for arrangements of his burial.

Von Navarosa, the team’s founder, is currently admitted in a hospital for further treatment.

The incident happened at around 7:30 am about 200 to 300 meters from the shoreline of Lingganay Resort in Sitio Tulubhan in Manocmanoc.

According to the Philippine Coast Guard (PCG), the 20-seater boat capsized while the paddlers were training for the Kaohsiung City Cup in Taiwan on November 8 to 10.

(We want to know why they did not survive. Most of them come from Boracay. The waters during this time of the year are really somewhat treacherous. Sometimes when you leave the shore, the weather is good, but when you reach the middle of the sea the winds and waves get stronger.)

Balilo said the Coast Guard and the police conducted operational response and search and rescue operations of the distressed paddle boat.

“One of the survivors noted the sea was calm when they departed from Bulabog, however, after the reef, rough waves gradually filled the boat with water. The boat sank, and the paddlers were holding on to the boat. However, strong waves and current made the boat [roll] over, making it unstable and [displacing] the paddlers,” acting Malay Mayor Floribar Bautista said in a statement. – Rappler.com