Sep 30, 2019 3:55 PM PHT
Bonz Magsambol
Facebook Twitter Copy URL
Copied
What do you think of the Duterte administration's move to bring Mocha Uson back to government? 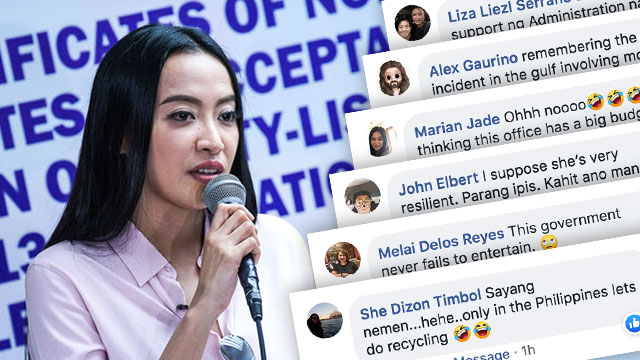 MANILA, Philippines – Controversial pro-Duterte blogger Mocha Uson is back in a government post. Her return, however, is being criticized widely by netizens, with one common sentiment being, “This government is good at recycling garbage.”

This is her third government position under the Duterte administration. In 2017, she was appointed as a member of the Movie and Television Review and Classification Board, and later on she was named presidential communications assistant secretary.

The OWWA is the government agency in charge of helping Filipinos working abroad. They assist in helping overseas Filipino workers (OFWs) adjust to life in other countries and are supposed to be the go-to office for any concerns and issues they have with their foreign employers.

The OWWA is under the Department of Labor and Employment.

Mabelle Lubag Ancheta expressed her frustration over Uson’s appointment, asking why the government couldn’t choose someone who was competent and patriotic.

The same sentiment was shared by Tochi Andalis.

Meanwhile, Mharlane Olivia Roxas Corral and Alvin Dizon Campomanes took a swipe at the Duterte administration for appointing someone like Uson.

“Why are we wasting our hard earned money [on] these people… sayang [a]ng sahod (a waste of salary). Pamigay na lang sa mahihirap. (Just give it to the poor)” Corral wrote.

Uson’s stint at the Presidential Communications Operations Office (PCOO) was marred by controversy. She had been accused of spreading lies and propaganda on her Facebook page while serving for the government. (READ: Mocha Uson: Fake news victim or fake news peddler?)

Months before resigning from her PCOO position, she even made headlines for mocking the federalism campaign. (READ: Why don’t you just say sorry, Mocha?)

In the one-hour video with Uson for the “Good News Game Show,” co-host Drew Olivar was seen singing “i-pepe” and “i-dede” (these refer to the vagina and breasts, respectively) while dancing and gesturing to his crotch and chest areas. He then yelled “i-pederalismo” at the end of the number.

It was obscene, wrote Filipinos on their social media posts.

Uson also ran as representative for the AA-Kasosyo party list but failed to secure a spot.

While there is supposed to be a one-year ban from appointments to government posts imposed on electoral candidates, the rule does not cover party list nominees.

A change to this exemption has been sought by those who believe it gives an unfair advantage to party list nominees. The 1987 Constitution clearly states: “No candidate who has lost in any election shall, within one year after such election, be appointed to any office in the Government or any Government-owned or controlled corporations or in any of their subsidiaries.”

Here’s what other netizens had to say about Mocha Uson’s new government position:

What do you think of the Duterte adminisration’s move to bring Mocha Uson back to government? – Rappler.com