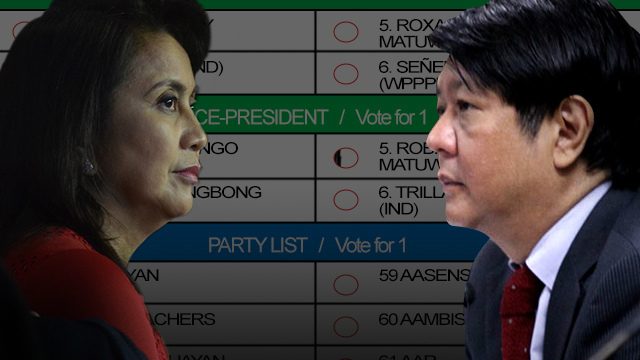 The case was on the High Court’s agenda for Tuesday, October 1 and again on October 8 but the en banc did not act on it. Another round of deliberations has been scheduled for October 15.

The PET is expected to decide whether the pilot recount, involving ballots from 3 provinces, was enough to affirm Robredo’s victory, or if results showed basis to proceed to reviewing ballots from additional provinces – meaning substantial discrepancy was uncovered in the first batch of provinces.

At stake is the second highest position in the country. Marcos has accused Robredo of electoral fraud after the latter beat him in the 2016 vice presidential elections by only 263,473 votes.

It’s been over 3 years since Marcos filed a poll protest versus Robredo. Since then, the SC sitting as the PET has finished recounting the ballots of the 3 pilot provinces chosen by Marcos – Iloilo, Negros Oriental, and Camarines Sur – covering 5,415 precincts. (TIMELINE: Marcos-Robredo election case)

Here’s what you need to know to get you up to speed before the PET’s next ruling:

What is being decided on? The main issue that will be tackled by PET’s resolution is the result of the initial review of ballots from pilot provinces and whether or not substantial discrepancy was seen. This will be the basis of PET’s decision whether or not it will continue the recount of votes from other provinces.

Depending on the results, Marcos’ case against Robredo can either move one step further to start a recount of votes from more provinces or stop due to no “substantial recovery” in his favor. Marcos earlier requested a recount of 36,465 clustered precincts, but PET decided to hold an initial recount of the 5,415 precincts first, before assessing whether to proceed or not.

This follows Rule 65 of the 2010 Rules of the Presidential Electoral Tribunal, which says that after examining the pilot provinces, the tribunal can decide to dismiss the protest or proceed to further recount. At what stage is the case now? SC Justice Benjamin Caguioa, the ponente in the case, submitted his report on the result of the pilot recount on September 9, 2019. The en banc has not made any action on Caguioa’s report so far.

Prior to Caguioa’s report, Robredo’s lawyers urged the High Court in June 2019 to “immediately resolve” the election case, claiming “clear victory” in the electoral protest.

The Robredo camp claims that unofficial numbers from the recount showed an increase of around 15,000 in her votes. According to Robredo’s lawyers, the discrepancy comes from the ballots initially counted as stray for not following the 50% shading threshold. They were credited to her when the tribunal ruled to follow the 25% shading threshold. (READ: Marcos vs Robredo: Shading thresholds set aside in sorting out ballots)

The PET, however, decided it cannot stop the protest based only on Robredo’s claim of an additional 15,000 votes as this was “merely speculative.” While the PET does not give official updates on its ongoing revision, both Robredo and Marcos have revisors in the recount which makes them privy to official proceedings.

Aside from this, the PET also decided on the following: 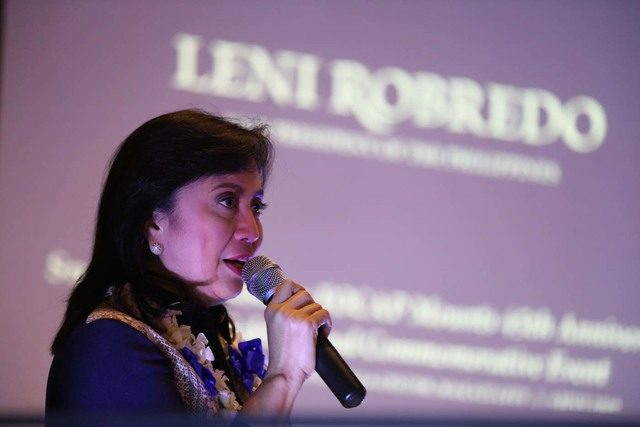 This would happen if no substantial recovery of votes in favor of Marcos or proof of electoral fraud is found from the recount of ballots from the 3 pilot provinces. In this case, the SC may dismiss Marcos’ petition.

2. PET goes on to review ballots from what remains of the 36,465 precincts where Marcos is claiming electoral fraud.

This would happen if substantial recovery of votes is seen from the recount of ballots from the 3 pilot provinces of Iloilo, Negos Occidental, and Camarines Sur. If this is the case, a recount in what remains of the 36,465 clustered precincts where Marcos requested a recount will take place. This covers 21 provinces, 5 cities, and one district in Northern Samar.

Another possible scenario is the High Court may decide to probe the ballots from 3 provinces in the former Autonomous Region in Muslim Mindanao. Marcos’ 3rd cause of action was for the PET to nullify votes in these provinces, claiming “widespread presence of terrorism, violence, threats, coercion, force, intimidation,” and other anomalies, such as batch-feeding and pre-shading of ballots.

4. PET asks Comelec and experts how to proceed with the vice presidential electoral protest

In this scenario, the SC is expected to order the poll body and amici curiae (friends of the court or experts) to submit position papers on how it should treat Marco’s 3rd cause of action, which is to nullify votes in Basilan, Lanao del Sur, and Maguindanao.

Marcos had earlier urged the PET to review election documents – not just ballots – from the 3 provinces. However, the PET cited the “explicit mandate of Rule 65” in saying that it couldn’t do so yet at the time. Robredo has urged the PET to “not change the rules in the middle of the game.”

This would be a departure from PET’s own Rule 65, which says if after the initial recount in pilot provinces “the protestant or counter-protestant will most probably fail to make out his case, the protest may forthwith be dismissed, without further consideration of the other provinces mentioned in the protest.”

In this scenario, the SC orders the review of election materials from Basilan, Lanao del Sur, and Maguindanao for indications of cheating, which could become the basis for the nullification of votes in that area. Why this matters: According to Professor Ela Atienza, chair of the University of the Philippines’ political science department, the Marcos vs Robredo electoral protest is bigger than just the two parties involved in the case.

If the PET decided to junk Marcos’ electoral protest after the recount, Atienza said this would be a win for Robredo, Comelec, and the High Court as it would show the decision and voting was done “on the basis of evidence.”

“It’s a plus point for elections and the rule of law,” Atienza said.

However, if the PET finds substantial discrepancy in the initial recount and Marcos’ electoral protest prospers, Atienza said lingering doubts on Robredo’s win would remain and public perception of the Philippine electoral process would be further weakened.

Since her victory in the 2016 polls, Robredo has been called a “fake” vice president by Marcos’  supporters, and has had to contend with false claims circulated online against her. Such an outcome, Atienza said, may also further weaken the opposition as it would continue to place doubts over Robredo, who is already the highest ranking official for the opposition.

She said negative perceptions may prosper toward the judiciary, whose decision to allow former dictator Ferdinand Marcos to be buried at the Libingan ng mga Bayani (Heroes’ Cemetery) set off Duterte’s winning streak in the High Court.

More than this, though, Atienza said a positive turnout for Marcos would further solidify the return to power of the Marcoses.

“And that can increase Bongbong Marcos’ chance for the presidency in the next national elections because it will bolster his claim,” she said. “It represents not just Marcos’possible running for office but the complete return to power of the Marcoses, their complete rehabilitation.”

Chief Justice Lucas Bersamin earlier said the PET is moving carefully “because the credibility of our processes as well as the political system here is at stake.” – Rappler.com