Congresswomen push bill vs child marriage: ‘We owe it to young girls’ 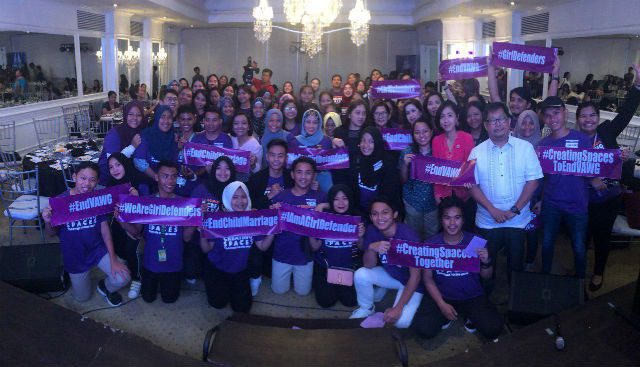 MANILA, Philippines – Several congresswomen committed to back the bill seeking to ban child marriages in the country, but emphasized the fight should take a multi-sectoral approach.

On Tuesday, October 1, the following lady legislators attended the launch of the #GirlDefenders alliance of policy makers, non-governmental organizations, and young girls who are pushing to raise the minimum age of marriage for Muslims to 18 years old:

Alba argued gender inequality is the “root cause” of child marriage, which remains a common practice in Muslim and indigenous peoples communities. (READ: Too young to marry)

“Gender roles, along with cultural practices, restrict our young girls’ abilities to reach their potential and to make decisions that affect their lives. Child marriages are manifestations of gender-based discrimination against girls and cultural norms that value girls less than boys,” she said.

The Family Code prohibits minor from getting married in the Philippines. But Presidential Decree (PD) No. 1083, or the Code of Muslim Personal Laws, allows Filipino Muslim males the right to marry at the age of 15. Muslim females are allowed to marry as young as 12, provided they have begun menstruating and there is permission from their male guardian or wali.

Saulog said, regardless of culture, the practice of early marriage should end as it “robs the children of [their] childhood.” (WATCH: ‘My 14-year-old daughter married a stranger’)

“This practice exposes the children to abuse. The girls who are married are unable to fend for themselves. They do not understand their rights. They do not have the means to protect themselves,” said the party-list lawmaker.

Saulog, Alba, Brosas, and Elago said they would push for two bills filed by their colleagues in the 18th Congress that seek to declare as “public crimes” the facilitation and solemnization of child marriages.

If passed into law, the measure would repeal the exemption that PD 1083 grants to Filipino Muslims to marry below the age of 18. It would also punish those who facilitate early marriages.

Young girls should speak up too

For progressive legislators Brosas and Elago, the fight to end child marriages extends beyond the halls of Congress.

Elago encouraged the youth to speak up. The congresswoman gave an impassioned speech explaining that her experience of being bullied as a child for her speech defect eventually encouraged her to represent the youth in Congress.

(This is the reason behind my strong support for any moves to fight all forms of abuse that hamper the development of children, the future of our country.)

Brosas also said it is important that young girls fighting this practice should make their voices heard, whether it be by attending forums, holding plays, or composing music.

(We want you to be heard now. We want change for our future. That’s why it’s important for children to speak out because even if we adults are gone from this world, you would still be here to continue fighting.)

“Legacy ‘nyo ito…. At para rin sa future ng mga susunod sa inyo,” she added. (This is your legacy… And this is for the future of those who will come behind you.)

Pushing for the passage of the child marriage bill, however, will be an uphill battle. The measure only reached the committee level during the previous 17th Congress.

The ant-child marriage bill is also not in the list of common legislative priorities of both the House and the Senate in the 18th Congress. – Rappler.com