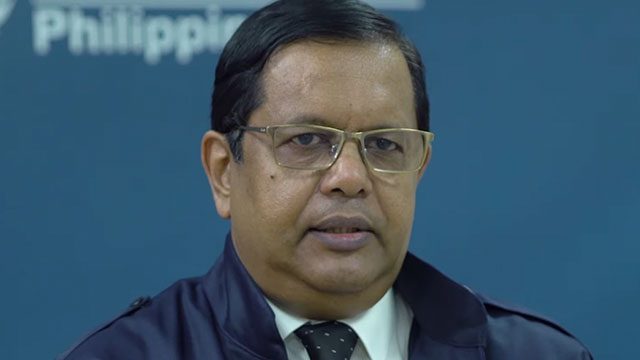 Facebook Twitter Copy URL
Copied
WHO country representative Rabindra Abeyasinghe says that in the Philippines, nearly 3 of 5 kids under the age of 5 are not fully protected against polio.

MANILA, Philippines – The simultaneous outbreaks of measles, dengue, and polio in the Philippines send a clear message that the country needs to improve its routine immunization system, a World Health Organization (WHO) official said.

“If we want to prevent outbreaks of vaccine-preventable diseases, we need to use this opportunity and the lessons that we’ve identified to strengthen the system and make lasting changes so we can protect the Filipino children from future outbreaks,” WHO Representative to the Philippines Rabindra Abeyasinghe said in a Rappler Talk interview.

Abeyasinghe said that in the case of the Philippines, “nearly 3 of 5 kids under 5 years are not fully protected” against polio.

The Department of Health declared a polio outbreak on September 19, marking the return of the disease to the country after 19 years. This was after the DOH confirmed that a 3-year-old girl from Lanao del Sur contracted the disease – one case too many in a country previously considered as polio-free. (EXPLAINER: What is polio?)

The DOH earlier said that the girl, who is now paralyzed, did not get vaccinated against polio.

According to the DOH, the average national polio vaccination stands at about 66% to 68% – far from the 95% target for herd immunity.

Abeyasinghe noted that vaccine hesitancy and vaccine access in the Phiippines remain to be challenges in achieving the 95% coverage.

A 2018 study of the London School of Hygiene and Tropical Medicine showed that vaccine confidence in the Philippines plunged to 32% in 2018 from a high of 93% in 2015. This was fueled by the Dengvaxia controversy largely blamed on alarmist statements against the anti-dengue vaccine. (READ: ‘Panic’ over Dengvaxia harms other vital vaccination programs, health experts say)

Abeyasinghe pointed to factors other than confidence in vaccines, among them, complacency. “People believe that these diseases are no longer relevant to us, we are protected and we don’t need to worry about it, we don’t need to vaccinated our kids,” he said.

“Another factor, for reasons of inconvenience, sometimes for circumstantial reasons, kids are left with caregivers because the parents are working in another town or another country, and they don’t receive their vaccines,” Abeyasinghe added.

A bigger challenge still, he said, was the issue of access.

“Sometimes people also don’t have access to vaccines because the local health center is closed, or because of the lack of staff, or the center is open but the vaccine’s out of stock, so you have to go very long distances to access the vaccines,” the WHO official said.

He also said cited the importance of strong local level support for the program.

“We’re going to need a lot of support at the local level – from regional, provincial, local government units” to respond to polio and other vaccine-preventable diseases, Abeyasinghe said.

“It’s critically important that when the campaign starts, the vaccine is available at all those points in adequate quantities. We still have a lot of work to do in the next few weeks as we prepare for the response,” he added.

As part of the response to the polio outbreak, the WHO and the United Nations Children’s Fund (Unicef) will bring free polio vaccines to the Philippines.

DOH Disease Prevention and Control Bureau officer-in-charge Anthony Calibo had earlier cited the big challenges in the government’s immunization program: lack of health workers on the ground, the communication of vaccination campaigns, and the monitoring of materials delivery.