Gordon lashes out at Albayalde: ‘You dropped the ball big time’ 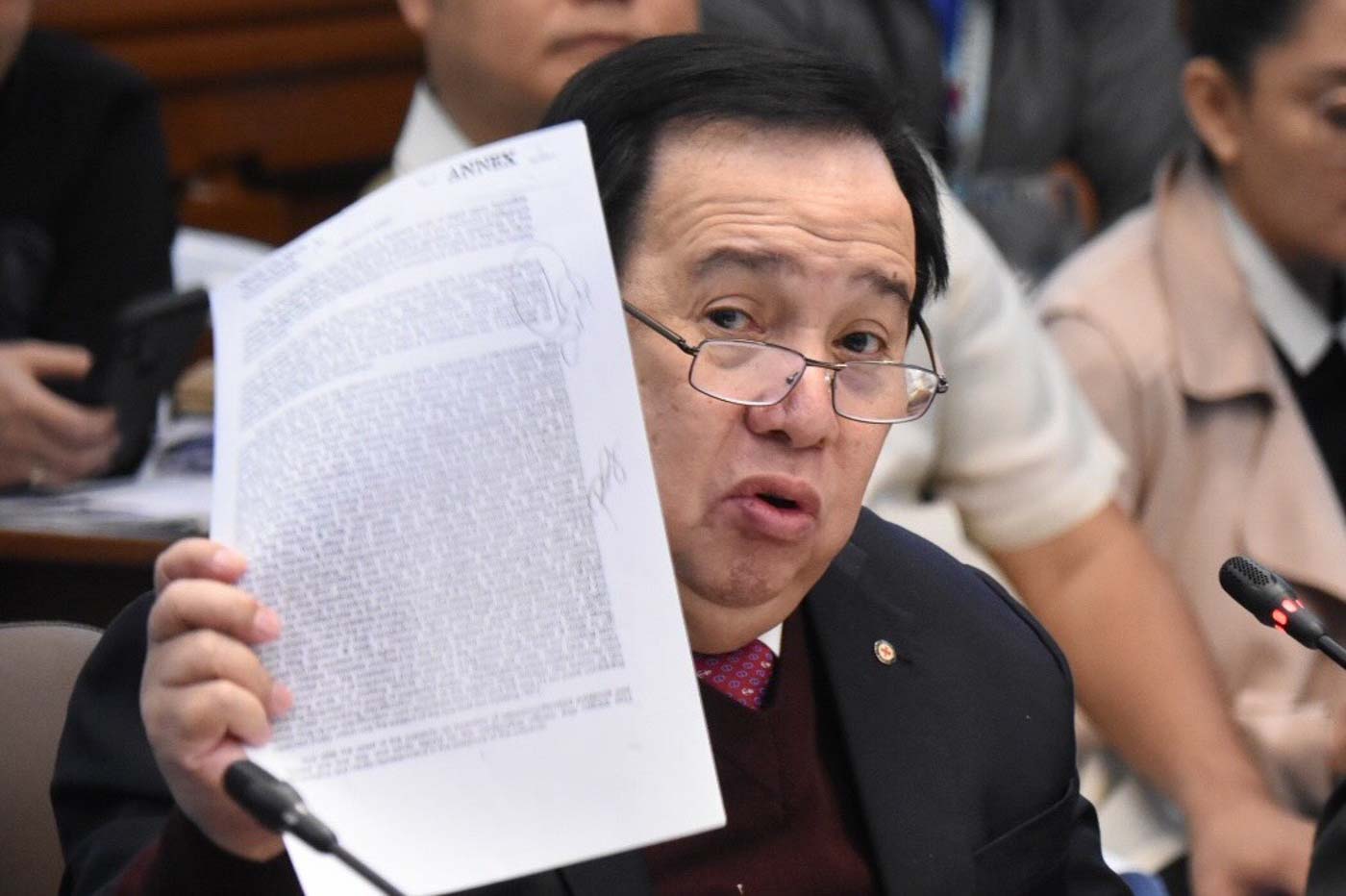 “When the Senate is insulted, we turn really, really nasty. And that’s not a threat. We want you to know that we are serious about it. So I’ll call a spade a spade: You dropped the ball big time on this one,” Gordon told Albayalde as the Senate tackled the practice of drug recycling in its probe into the controversial good conduct time allowance (GCTA) law.

Albayalde apparenty misheard what Gordon said as he responded, “Yes, we will, Sir.” This prompted the senator to reiterate, “No, no, you dropped the ball from the very beginning.”

The senator was visibly exasperated by Albayalde’s continued defense of cops led by Major Rodney Baloyo, who senators cited in contempt  for lying about the details of an anti-drug raid in Mexico Pampanga, on November 29, 2013.

“You handheld your people up to today,” Gordon told Albayalde during the hearing attended by the cops who used to be under him when he was Pampanga police chief.

The chairman of the Senate blue ribbon committee noted that Baloyo appeared before the Senate armed with a “script of lies” that was debunked by other senior police offcials who investigated the contoversial operation. (READ: ‘Spectacle of a grand cover-up’: Senate hearing bares how ‘ninja cops’ remain in service)

The sermon came after senators repeatedly questioned Albayalde about the legitimacy of the 2013 operation where 13 cops were found to have stashed away over 100 kilos of shabu, accepted bribes, and arrested a fall guy – grounds for a dismissal order that was later downgraded to demotion.

In siding with his men, Albayalde repeatedly said that “presumption of regularity” is on the side of the cops, even as he vowed to probe them.

‘You made your choice’

During the hearing, Baguio City Mayor Benjamin Magalong addressed speculations about his “motive” in speaking up on ninja cops, and the controversial 2013 Pampanga drug operation.

Magalong shared his own assessment of what happened during that operation. He said the 13 cops did not follow the steps in crime scene processing, except for one, when they arrested supposed drug dealer Ding Wenkun.

The former Criminal Investigation and Detection Group (CIDG) chief said that the mere violation of the procedures should have prompted Albayalde to start an investigation.

“I’m not accusing Albayalde of anything. Why was there no logical action of a provincial commander when in fact there is a glaring violation by the operating troops?” he asked.

Magalong said that Albayalde had choices at that time.

“You should have done something right or you do not do anything at all. Those are your choices. Why are we here? Obviously, you made your choice. You made a choice. That’s why we’re here,” he said in a mix of Filipino and English.

Magalong  brushed aside allegations that he was tainting the reputation of Albayalde so he would be forced in an early retirement, and allow his successor to assume as PNP chief earlier. Albayalde is set to retire next month.

He also said he was not “jealous” of Albayalde for being appointed as PNP chief, noting that he “gave up career and ambition” when he led the investigation of the Mamasapano incident.

In his report on the Mamasapano investigation Magalong had concluded that then-president Benigno Aquino III committed lapses in judgment during the planning of the high-stakes operation.

Senators at the hearing backed Magalong’s statement that he had no motive against Albayalde, and reiterated that the retired cop’s revelations were incidental, made in response to senators’ queries.

During the hearing, Senate President Vicente Sotto III pointed out that what was clear to him was that Albayalde was not informed about the operation ahead of time.

(In my view, I didn’t hear anything bad about General Albayalde from the time he assumed PNP chief. So what I’m thinking is that the operation was unofficial. It was done under the table, that’s why they don’t want to inform those on top.)  – Rappler.com