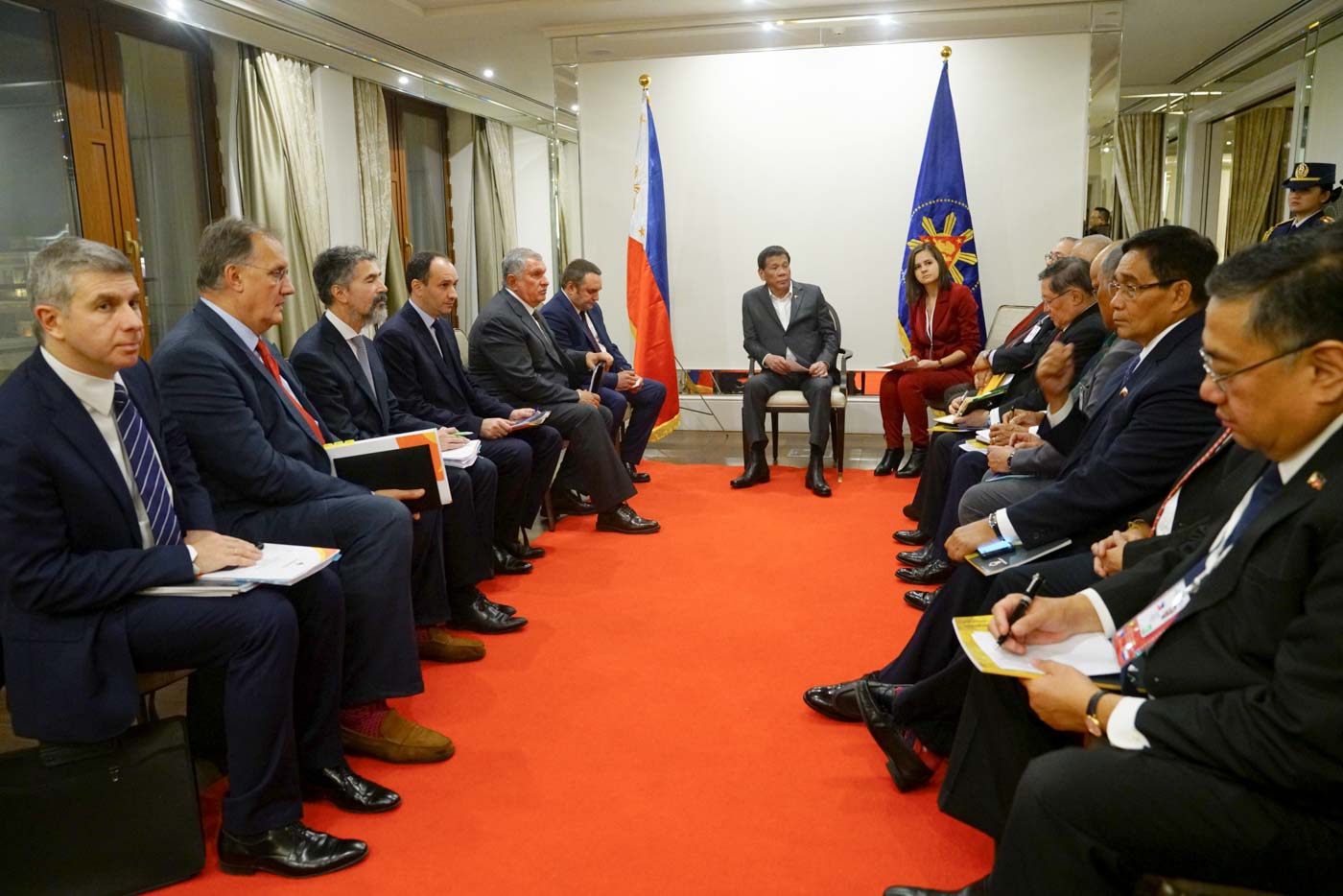 Rosneft CEO Igor Sechin and other company executives paid a courtesy call on Duterte on Wednesday, October 2, at the Four Seasons Hotel in Moscow, according to Malacañang.

Rosneft executives were the first from Russia’s private sector to meet with Duterte in Russia. Their meeting was the second item in his list of activities on Wednesday, his first full day in the northern country.

Before the meeting, Duterte was at Russia’s White House to pay Prime Minister Dmitry Medvedev a visit.

Exploration on the table? Speaking to media before the Rosneft courtesy call, Philippine Ambassador to Russia Carlos Sorreta said Russian energy corporations are interested in oil and gas exploration in the Philippines.

Since Russia is not claiming any part of the West Philippine Sea, believed to be rich in oil and gas, such a deal would not adversely impact the Philippines’ rights in the area.

“They’re willing to do it within our laws. They’re not a claimant. If they come in, it’s really in full recognition of our sovereign rights and our right to explore,” said Sorreta.

He had no doubt about the ability of Russian oil firms to explore for natural resources, calling the country an “exploration powerhouse.”

Other Russian oil companies, like Gazprom, have such projects in Vietnamese waters.

Reuters has reported that Russian firms had been worried that Beijing would pressure them to end the projects in the disputed waters, but China has refrained from doing so, apart from standard public warnings.

A Foreign Policy piece by Bennet Murray described Rosneft as Vietnam’s “strange ally” against China. Despite Russian President Vladimir Putin’s support for China’s non-recognition of the Hague ruling which invalidated China’s claim to the South China Sea, Russian companies are working with the Vietnam government to drill for oil in those same waters claimed by China.

China gets most of its oil from Russia.

Why does this matter? Duterte himself and Philippine energy officials have stressed the urgency of looking for other sources of energy for the Philippines given the decline in the Malampaya gas project’s supply. The gas field in the Palawan area supplies 40% of Luzon’s energy, but is expected to run dry in 2024. (READ: ‘Oil is everything’ – Duterte’s rhetoric on West Philippine Sea joint exploration)

There’s also the volatility of world oil prices which makes indigenous sources of energy more ideal for the Philippines.

Critics have urged caution when entering into any deals with Beijing that would violate the constitutional provision that resources in the West Philippine Sea are for the exclusive use of Filipinos.

Because of tension in the West Philippine Sea, a ban on exploration in the area remains.

But the Duterte administration has pursued oil exploration with other countries and entities.

In October 2018, Duterte signed a contract allowing Israeli firm Ratio Petroleum Ltd to explore for oil and gas in a 416,000-hectare area east of Palawan.

It remains to be seen if Rosneft would seek a similar deal and if the Duterte government would be willing to approve it.

Will China also refrain from pressuring Russia if such a deal covers areas in the West Philippine Sea? – Rappler.com