Oct 4, 2019 8:27 AM PHT
JC Gotinga
Facebook Twitter Copy URL
Copied
(UPDATED) On the flipside of the Philippine Military Academy’s proud history of churning out military and police generals is a list of cadets who died as a result of hazing 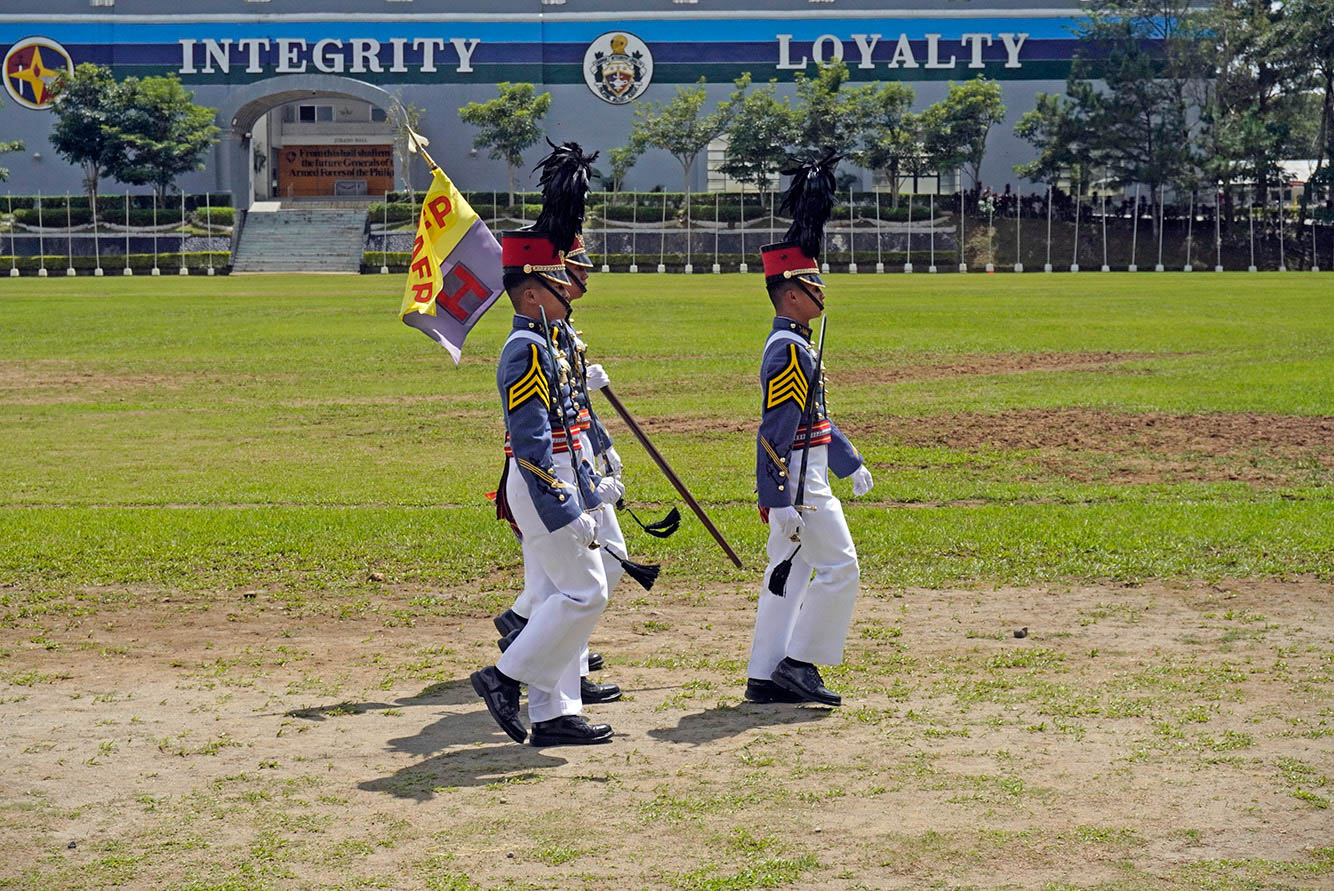 MANILA, Philippines (UPDATED) – For police chief General Oscar Albayalde, it should be clear to everyone that he would never have tried to intimidate anti-drug chief Director General Aaron Aquino into flouting the law when they were regional police chiefs in 2016, because Aquino was his upperclassman at the Philippine Military Academy (PMA).

Albayalde, of PMA Class 1986, had called up Aquino of PMA Class 1985, to check on the “status” of cases involving 13 cops who were under him when he was Pampanga police chief in 2013.

The 13 cops were accused of pilfering a big portion of a stash of crystal meth they recovered from an anti-drug raid, and they were up for dismissal, but it appears Albayalde, as Metro Manila police chief in 2016, tried to intervene in their favor by asking Aquino, who was then on top of the case as Central Luzon police chief, to hold off.

Of course not, said Albayalde. “I could not possibly influence an RD (regional director) or an upperclass.”

As to why he took an interest in the 13 cops’ fate, Albayalde told Aquino it was because they were his men.

Albayalde’s alibis were self-explanatory in the military culture.

The third and last word in the PMA’s motto is loyalty. It’s the mortar that holds the military together, that turns a pile of bricks into a formidable wall.

In the tradition of prestigious, exclusive organizations like fraternities and military academies, loyalty is forged through shared hardship upon entry into the group: initiation rites. The overzealous take it further by inflicting physical harm to try the initiate: hazing.

“We all went through this,” Senator Panfilo Lacson of PMA Class of 1971 said in a hall full of active and former military officers during the budget hearing for the Department of National Defense (DND) on Monday, September 30.

The matter of PMA Cadet 4th Class Darwin Dormitorio’s death caused by his fellow cadets’ brutality was the last item to be brought up in the hearing that also tackled funding issues, Chinese spying, and territorial incursions, and the aftermath of terrorism in Marawi City.

Clearly, hazing was the most difficult and sensitive item on the agenda because, as Lacson himself said, it hit home.

On the flipside of the PMA’s long and proud history of churning out military and police generals is a list of cadets who died as the result of hazing, or the culture of torturous loyalty that deadens upperclassmen’s hearts to the plight of plebes too eager to prove themselves worthy, or else too afraid of the price of being judged disloyal should they “squeal” on their taskmasters.

Four days before the end of their plebe year, on February 13, 1978, the Bravo Company lay on their backs as their upperclassmen dropped shot puts – heavy metal balls – onto their bare stomachs.

One of the plebes, Cadet 4th Class Manuel Salas, was killed. Another one hemorrhaged and almost died: Alan Purisima, who went on to become chief of the Philippine National Police from December 2012 to February 2015.

In November 1981, Cadet 4th Class Andres Ramos Jr died of traumatic shock from beatings by some of his upperclassmen.

The following year, a military court sentenced a cadet to 5 years of hard labor for his participation in Ramos’ hazing. Another cadet was suspended from the academy for one year, for not reporting the incident.

The victim was the son of Philippine Constabulary regional commander Brigadier General Andres Ramos, and was the batchmate of anti-drug chief Aaron Aquino, and former Philippine Army commander and now Social Welfare Secretary Rolando Bautista in the PMA Class of 1985.

Cadet 4th Class Ace Bernabe Ekid was on his second try joining the academy after having taken a yearlong sick leave when he collapsed during war games at the Philippine Marines base in Ternate, Cavite, in June 2000.

A medic was able to bring Ekid back to consciousness, but the 21-year-old plebe was delirious and incoherent, the Philippine Star reported. Then moments later, he started convulsing and was rushed to a hospital where he died just over an hour later.

Although the PMA after an investigation ruled out hazing as the cause of Ekid’s death, his family and friends insisted he had been singled out for hazing by some upperclassmen because he was good-looking and from a wealthy family.

Ekid’s official cause of death was heatstroke.

On March 10, 2001, 23-year-old Cadet 4th Class Edward Domingo was beaten up by several 2nd Class cadets in their dormitory as an initiation rite of passage to his second year in the academy.

Domingo was reportedly hit eight times with a pipe on his buttocks and then punched many times on his abdomen until he collapsed. He then died of a “cardio-respiratory attack” at the PMA Station Hospital.

Barely a month later, on April 7, Cadet 4th Class Monico de Guzman died while being treated at the Baguio General Hospital for injuries he sustained from severe beatings he received in the academy.

In 2002, two cadets were convicted of homicide in Domingo’s death, and were sentenced to 12 years in prison.

In the last month of his life, Cadet 4th Class Darwin Dormitorio lived according to the whims of some upperclassmen in his squad. They humiliated and tortured him over petty things such as a missing pair of combat boots and for screaming “like a faggot” when they electrocuted his genitals.

The 20-year-old plebe soldiered on until his body gave way to the countless kicks and punches inflicted on him by his fellow cadets.

After he died of cardiac arrest as a result of internal bleeding on September 18, the police investigating his case said Dormitorio’s time at the academy had been a “living hell.”

The case rocked the PMA. Its superintendent and commandant of cadets both resigned. So did the commanding officer and attending physician of the PMA Station Hospital, under whose watch Dormitorio had gone in and out for treatment of injuries that could only have been from hazing.

The cadets directly responsible for his death have been dismissed and are expected to face criminal charges.

Even so, Lacson feels sorry for Dormitorio’s tormentors – and killers.

“While we sympathize with the family of the late Dormitorio, we can’t help but also pity those who are now facing murder charges, violation of the anti-hazing law. Because they will be – There’s really that big possibility that they’ll be spending the rest of their lives in jail,” the senator said during the DND budget hearing.

“But how do we remedy this?” he then asked his fellow PMA alumni. How do they fix something they couldn’t fully bring themselves to admit is broken?

They all went through it. It made them who they are, as some of them proudly say. Could they then condemn a practice that, although never sanctioned by the academy itself, was a definitive part of their experience as cadets?

“But times have changed,” the former police chief added. He, after all, authored the amended anti-hazing law that finally defined hazing as inherently a crime, regardless of whether it results in someone’s injury or death.

The academy’s leadership has included hazing in the cadets’ “honor system,” that is, their tactical officers are now encouraged to routinely ask them if they have been victims or perpetrators of hazing, and they are honor-bound to answer honestly. The honor system dictates that cadets never lie, cheat, or steal.

Ultimately, the change must begin from the upperclassmen – all the academy’s alumni – according to the new PMA superintendent, Rear Admiral Allan Cusi.

All PMA graduates must stop “glamorizing maltreatment,” Cusi said, as though one’s capacity to endure pain and suffering were the measure of a soldier’s worth.

Cadets must have “heart and soul” as “warriors of the motherland,” Cusi said as he took over the leadership of the academy earlier this week. Because that loyalty in their motto is not so much to one another or the academy or the uniformed service as it ought to be to the motherland. – Rappler.com