After  he was conferred an honorary degree in foreign diplomacy, Duterte delivered a lecture to students and faculty members of MGIMO, Russia’s premier school for international relations which is run by the Ministry of Foreign Affairs.

Duterte was supposed to receive the honorary degree on May 24, 2017, on his first visit to Russia. But he had to cut short that trip following the Marawi siege that erupted on May 23 of that year.

The school has given honorary doctorates to many other presidents and world leaders, including former United Nations secretary-general Ban Ki-moon in 2010, former French president Nicolas Sarkozy in 2015, Lee Kuan Yew in 2005, and the former Philippine president Fidel V. Ramos in 1997.

Duterte had expressed aversion to honorary degrees on several occasions. 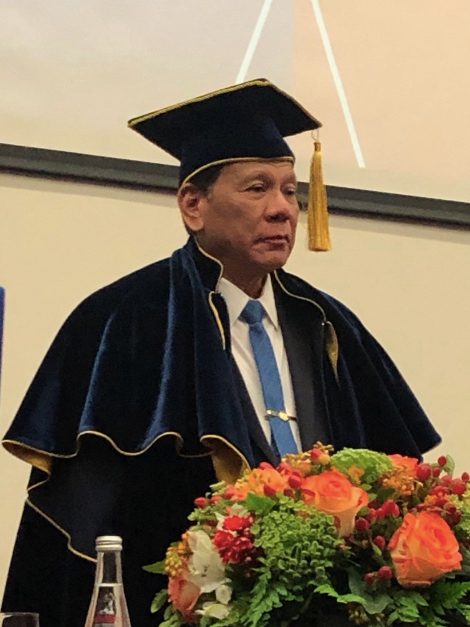 In 2017, he declined the offer of an honorary degree from the University of the Philippines, consistent with his “personal” policy to not accept awards or recognition since he was Davao City mayor.

At the time, the UP community was up in arms against the proposed conferment to Duterte because of his tainted human rights records, and his stifling of dissent, among other issues.

Asked why the President accepted the honorary degree from MGIMO, Philippine Ambassador to Russia Carlos Sorreta did not hazard a guess and told reporters in an interview in Moscow on October 2: “You have to ask the President. It’s a very personal thing.”

In response to questions, Sorreta said MGIMO decided to give the President the honorary degree as “the turn in Philippines-Russia relations, I think, is nothing short of dramatic” following Duterte’s pursuit of an independent foreign policy.

“History has long pulled as apart. The Cold War has stood in the middle and prevented us from taking advantage of many opportunities…. We’re such a close US ally. It’s a bit dramatic for them (Russians)…. But you know, the policy of the President is building relations with Russia, not necessarily at the expense of others. So be friends with everyone. We just don’t want to get involved,” he said.

Duterte himself cited the progress of Philippine-Russia relations under his watch during his bilateral meeting with Russian President Vladimir Putin on the second day of his visit.

Duterte was scheduled to meet with the Filipino community in Moscow also on Saturday night (Moscow time). He is set to return to Manila early afternoon of Sunday, October 6. – Rappler.com