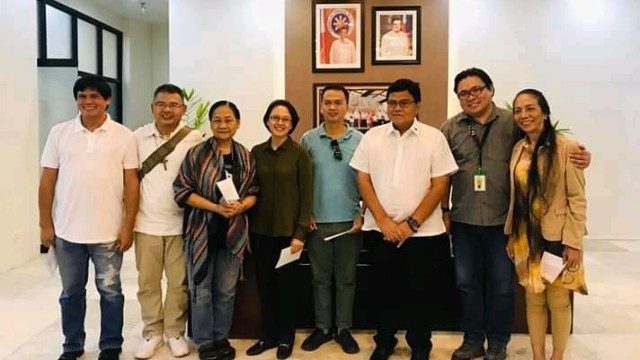 CEBU CITY, Philippines – On his 100th day in office on Tuesday, October 8, Mayor Edgar Labella swore in the members of the Cebuano Cinema Development Council (CCDC), a body created in 2014 but had not been constituted since.

The council was created during the term of current Vice Mayor Mike Rama when he was still mayor, but no members had been appointed before the end of Rama’s term. It was set aside by the administration of Tomas Osmeña, who won the mayoral election in 2016.

“There is a need to promote and preserve the Cebuano culture through film in order to establish a prosperous and unified film industry that produces high quality motion pictures which encourage social and cultural transformation,” the ordinance establishing the council read.

Current members of the council include:

The CCDC is personal to Labella. His father Eugene was a well-known filmmaker during the heyday of Visayan films.

“Unknown to many, Eugene Labella, one of the most prolific directors during the Golden Age of Cebuano Cinema, is the mayor’s father, and his mother, Esterlina Colina, was one of the most sought-after actresses at that time,” said CCDC member Beltran, an independent filmmaker.

Cebuano-language films were played almost on a regular basis from the 1940s to the early 1970s. Some film historians call this period the “golden age” of Visayan film.

The 2017 Cebuano film Patay Na Si Hesus, directed by Victor Villanueva, saw some mainstream success after it was screened nationally during that year’s Pistang Pelikulang Pilipino.

The council hopes more Cebuano films would be able to reach the same success.

After the swearing in of CCDC members, Labella’s marching orders were to prioritize digitizing and restoring film memorabilia, classic Cebuano films, and hosting a separate festival during Sinulog for free alongside the existing Sinulog Film Festival.

For a city known for its vibrant art and culture scene, this effort is surprisingly only one of the few art and cultural activities that are funded or supported directly by the city government. The city government also began offering free classes at the Cebu City Public Library and is heavily involved in the annual Sinulog Festival.

“For a city with a rich filmic heritage and history, it is definitely long overdue,” Beltran said. – Rappler.com