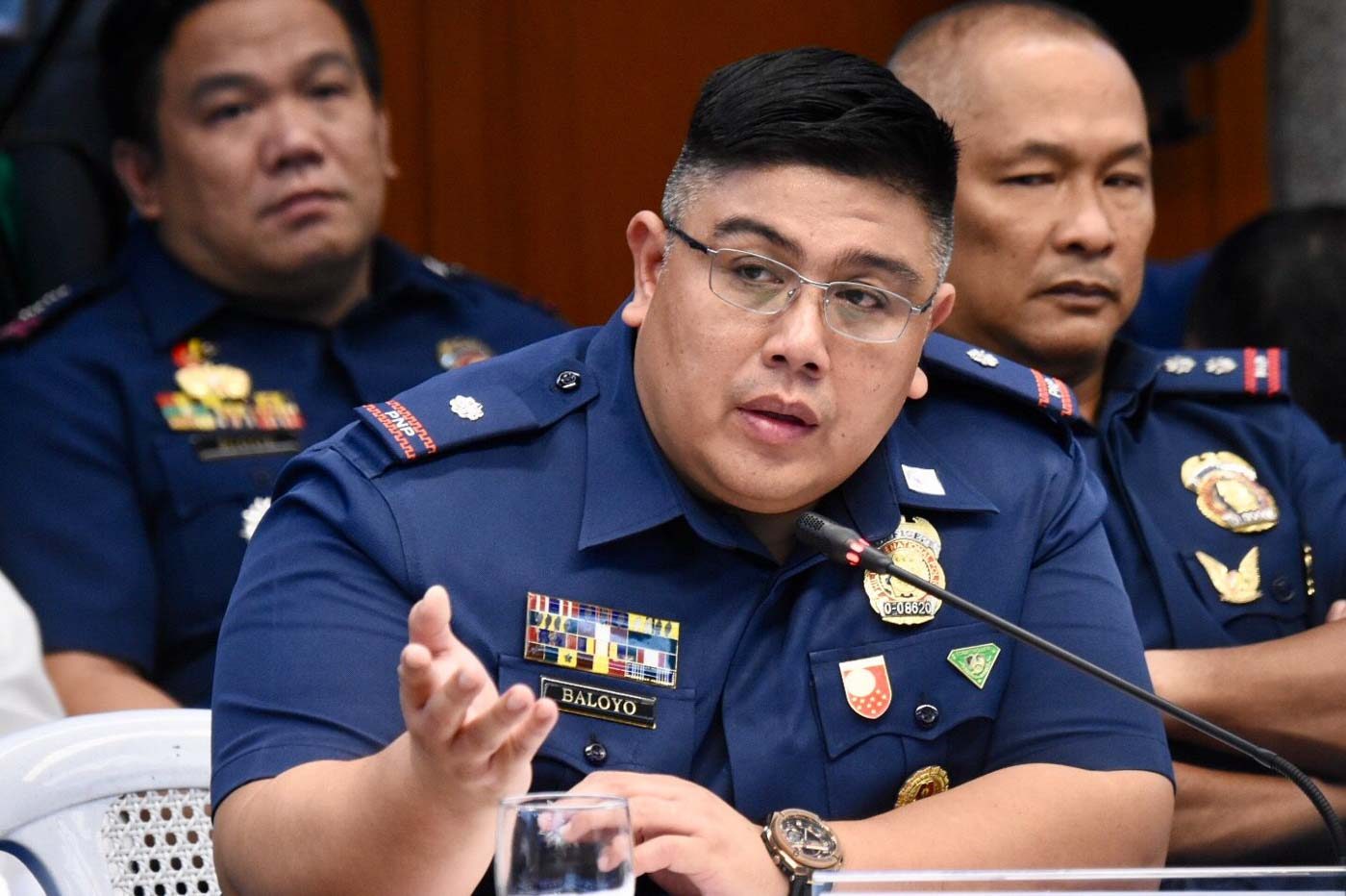 Facebook Twitter Copy URL
Copied
Major Rodney Balayo IV, who is among the alleged ninja cops, served as the deputy police chief of Tagaytay City. He is now on 'floating status.'

MANILA, Philippines – Senators are dumbfounded as to why Major Rodney Baloyo IV, who was among the alleged 13 Pampanga rogue cops, was assigned to a “juicy post.”

“‘Yung mga cases that they are a witness of. Kasi nagkakaproblema tayo before na ililipat sa Mindanao and they can’t attend court hearings. Isa pong malaking problema na walang pondo [sa eroplano], especially those thrown in the far, far areas. It’s not only Baloyo. [There are] 800 of them,” Albayalde said.

(There are cases where they are witnesses. It becomes problematic for us before that  they are  transferred to Mindanao and they can’t attend court hearings. It’s a big problem not to have funds for flights, especially for those thrown in far, far areas. It’s not only Baloyo. There are 800 of them.)

Baloyo has been serving as the acting police chief of Tagaytay for 4 months now, after the police chief was relieved.

Baloyo was among 13 cops involved in an anomalous drug operation in Mexico, Pampanga, in 2013, when Albayalde was Pampanga police chief. Philippine Drug Enforcement Agency (PDEA) chief Aaron Aquino, who was then Central Luzon police chief, assigned all of them to Mindanao pending the review of their dismissal order.

On Wednesday, senators pressed Albayalde on why Baloyo would be assigned to a “resort” city given his track record.

Senator Panfilo Lacson also noted that Tagaytay is far from Pampanga, if the intention is to assign them near the courts where they are supposed to appear. The former PNP chief said the cops should have been assigned to the regional headquarters and placed on floating status.

(What I can’t understand is that the request of the court is to bring them back to Region 3. How did he end up in Tagaytay? Why not place them in the regional headquarters of Region 3 and put them on floating status?)

Albayalde maintained he didn’t have a hand in transferring Baloyo, “As I’ve said, Mr Chairman, hindi po ako ang nag-utos na ilagay siya (I was not the one who ordered his transfer to Tagaytay).”

As it turned out, the Pampanga court requested only 5 cops to be brought back to Central Luzon – excluding Baloyo. The request to bring back Baloyo was made by his private lawyer.

Albayalde insisted that the PNP was merely complying with Section 91 of Republic Act No. 9165 or the Comprehensive Dangerous Drugs Act which prohibits the transfer of a member of a law enforcement agency when proceedings are still ongoing.

In response, Drilon said: “This strengthens our suspicion that this group has been given preferential treatment. All the circumstances point to that.”

Baloyo and the 12 other Pampanga cops were placed on floating status since the ninja cops controversy broke. On Thursday, Albayalde pledged to “fire” them if the reinvestigation of the case would show that they should be dismissed.  (READ: ‘Spectacle of a grand cover-up’: Senate hearing bares how ‘ninja cops’ remain in service)

Thirteen cops – who were previously under Albayalde when he was Pampanga provincial police chief – were involved in an anomalous drug operation. That illegal operation led to an order to dismiss the cops, but it was never implemented and later downgraded to a demotion.

The marathon Senate hearings so far revealed that Albayalde allegedly intervened in the case on two occasions: when he reportedly asked Aquino “not to implement” the dismissal order, and when he supposedly called then-PNP Criminal Investigation and Detection Group deputy director Rudy Lacadin about the case. – Rappler.com